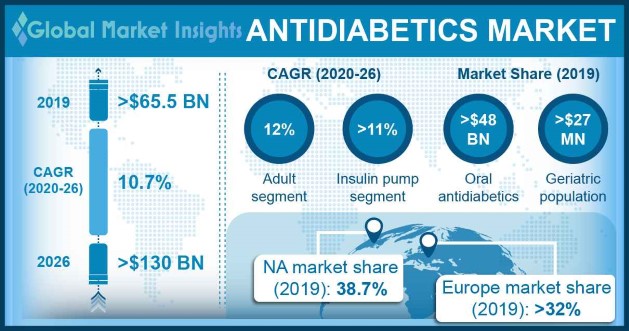 Increasing prevalence of diabetes across the globe will stimulate the market potential for antidiabetics drugs during forecast period. Need for effective treatment with low side effects will result into increasing R&D spending by pharmaceutical firms for drug development. Thus, escalating demand and adoption of antidiabetic drugs in developing as well as developed nations will boost the market growth in the upcoming period.

According to the European Society of Cardiology, diabetic population is estimated to reach at 628.6 million by 2045. Management of diabetes requires timely intervention and medication throughout the patients’ lifetime due to lack of curative drugs. Advancement in antidiabetic drugs has resulted into increased success rates and minimized complications.

However, considerable cost of insulin may limit antidiabetics market growth upto some extent in developing countries.

Insulin market constituted significant market share in 2019 and is expected to proceed at lucrative 12.4% CAGR. Introduction of short-acting analog has enhanced its post-prandial glucose-controlling ability in both type 1 and type 2 diabetic patients. Furthermore, with increase in type-2 diabetic patient pool, the segment will witness unprecedented growth during analysis period.

Geriatric population segment held over USD 27 million revenue in 2019. According to the European Society of Cardiology, among the total disease burden approximately 39.7% was due to population growth and ageing. Upsurge in geriatric population has contributed to significant diabetes burden.

With advancing age, prevalence of type 2 diabetes increases along with escalated risk of coronary heart diseases, vascular diseases and stroke. Older diabetes patients are exposed to high risk of sarcopenia and physical disability. Thus, in order to prevent comorbidities coupled with expanding baby boomers globally, the adoption of diabetes drugs in geriatric population will rise in the future.

Insulin pump segment is forecasted to progress at over 11% CAGR during the forecast years. Robust growth is primarily attributed to preference for insulin pumps due to its advantages. It offers reduced episodes of severe glycemic conditions with less glucose variability. Also, ability of pumps to store information that can be further analysed and used in treatment planning will boost the segment revenue.

Advancements in antidiabetics owing to the need for effective diabetic treatment in the U.S will expand the regional market

North America constituted 38.7% market share in 2019 and is expected witness robust growth rate in the forthcoming years. According to the American Diabetes Association, approximately 34.2 million Americans were living with diabetes in 2018. About 88 million people had prediabetes in the region.

The antidiabetics market research report includes an in-depth coverage of the industry with estimates & forecast in terms of revenue in USD from 2015 to 2026 for the following segments:

By Route of Administration

The market size of antidiabetics exceeded USD 65.5 million in 2019.
The industry share of antidiabetics is expected to witness growth at over 10.7% CAGR from 2020 to 2026.
U.S. market will grow at 10.3% CAGR through 2026, says this GMI report.
Insulin market constituted significant industry share in 2019 and is expected to proceed at 12.4% CAGR up to 2026.
Insulin pump segment is forecast to progress at over 11% CAGR during the forecast years.
Some of the prominent business players operating in the antidiabetics industry include AstraZeneca, Novartis AG, Johnson & Johnson, Merck & Co. Inc., Pfizer and Sanofi.
Customize this Report
Inquiry Before Buying