Ammonium Nitrate Market size was over USD 14.5 billion in 2020 and is expected to grow at a CAGR of 3.3% from 2021 to 2027 owing to the rising demand to produce adequate food coupled with growing concerns of arable land across the globe and rapid population growth has continuously encouraged the adoption of quality fertilizers to secure the food demand.

Ammonium nitrate is a white crystalline solid chemical compound, composed of ammonium and nitrate ions. It is commonly used as a fertilizer owing to its high source of nitrogen. At an elevated temperature, ammonium nitrate can be decomposed violently, leading to its use as an explosive in the mining industry. Furthermore, owing to its excellent hygroscopic nature, the chemical compound is largely used in food preservation applications. 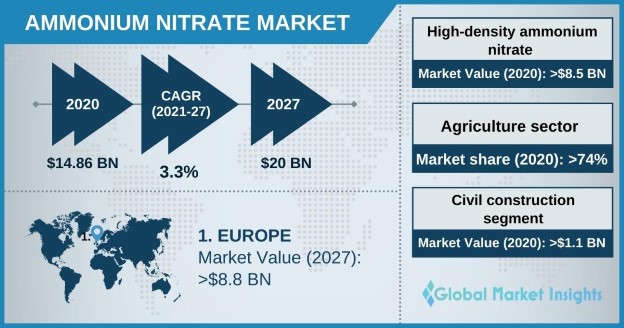 Fertilizers generally contain macronutrients such as nitrogen, phosphorus, and potassium. Among these, nitrogen fertilizers form a major share, followed by phosphate and potash. Nitrogen fertilizers are widely used in the agriculture industry for crop growth. Factors, such as rapid urbanization, increasing disposable income in developing countries, and rapid changes in dietary behaviors, collectively influence the food security.

The demand for food is likely to increase with the growing population across the globe. According to United Nations, the global population was 7.6 billion in 2017 and will reach 9.8 billion by 2050. Rising population and increasing income in the emerging countries are driving the world food demand.

The agriculture sector has experienced tremendous changes over the years as farmers are focusing on increasing the crop production across the globe. Further, limitations of total arable land across the world will considerably enhance the use of fertilizers, which will eventually boost the ammonium nitrate market share over the projected timeframe.

Additionally, favorable agro-food policies will sustain the demand for ammonium nitrate in the near future. Rapid climate changes coupled with extreme weather conditions further create scope for growth for the industry. Apart from the agricultural sector, the growing metal mining industry and construction sector will drive the product consumption over the assessment period. However, increasing inflation and fluctuating raw material prices may hamper the business growth in the coming years.

Further, safety measures, health impacts, and environmental concerns may limit the revenue generation. For instance, inhalation of concentrated ammonium nitrate may cause irritation in the respiratory tract. Moreover, the recent COVID-19 pandemic adversely impacted the industry size owing to production halts, labor shortages, and supply chain disruptions. Nevertheless, the rising demand from the agriculture industry and mining sector will stimulate the growth of ammonium nitrate market across the globe. 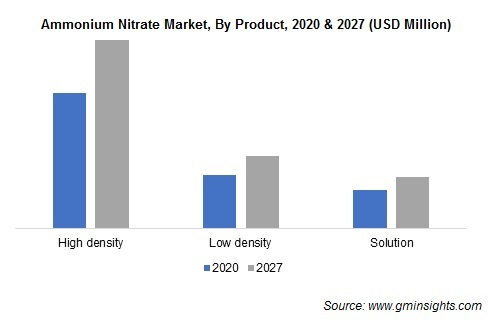 HDAN is a highly preferred product in the agriculture industry and will account for significant growth at a CAGR over of 3.4% up to 2027 owing to its highly dense, non-porous, and pure state prills. The rapidly growing demand for HDAN in agricultural applications due to the increasing crop yield, improving fertility of soil types, controlling growth of vegetation mass, and increasing gluten & protein content in grains will boost the overall ammonium nitrate market value over the forecast years.

The agricultural industry will augment the product demand 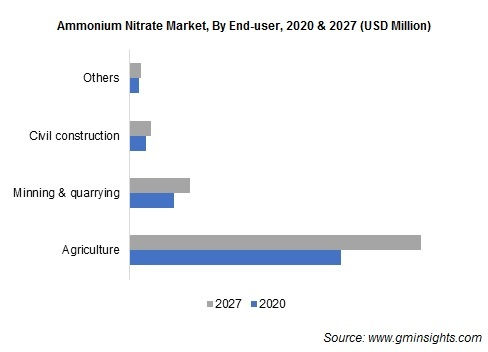 The agriculture sector accounted for the largest share of more than 74% in 2020 in the ammonium nitrate market owing to the rising product usage as a fertilizer. Fertilizers are majorly applied on plants or soils to improve yield, fertility, and plant growth. Factors including need for improving the crop production rate to meet the increasing food demand across the globe along with government initiatives & programs to create awareness about the use of fertilizers among farmers will gradually contribute to the ammonium nitrate market growth in the coming years. 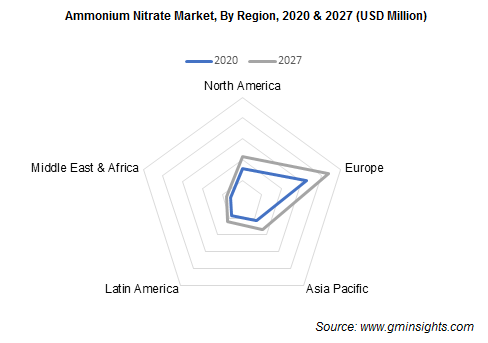 The Europe market is expected to surpass USD 8.8 billion by 2027. Countries, including Germany, the UK, France, and Italy, have a matured agriculture industry. According to the European Environment Agency, grassland and cropland together account for 39% of Europe’s land cover. Government programs and initiatives to enhance the use of fertilizers in the agriculture sector will augment the ammonium nitrate demand. For instance, the EU Nitrogen External Panel (EUNEP) provides Nitrogen Use Efficiency (NUE) indicators to adopt various strategies for improving crop yield and reducing environmental impact.

Furthermore, the European construction industry is growing at a significant rate due to the rising urbanization and the growing economy of the region. Increasing construction & mining activities in major countries of Eastern Europe, such as Ukraine, Russia, and Turkey, are likely to drive the explosives demand in the region.

Major companies in the market are continuously engaging in R&D activities along with capacity expansion and geographical expansion through several strategies to deliver high-end results to their customers. In October 2014, Yara International acquired OFD Holdings, which strengthened its global presence by expanding its offerings in the Latin America market.

The ammonium nitrate market report includes in-depth coverage of the industry with estimates & forecast in terms of volume in kilo tons & revenue in USD million from 2021 to 2027 for the following segments: