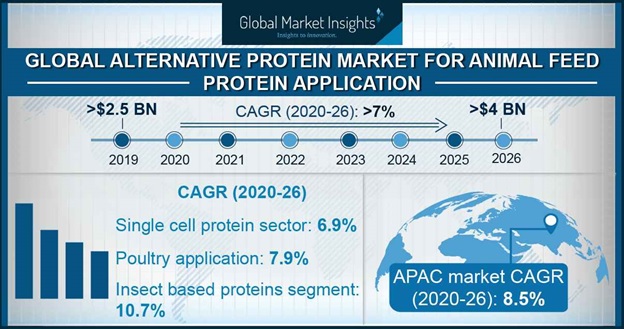 Animal feed additives demand is rising due to mounting livestock production globally to facilitate food demand is expected to boost the market. Alternative proteins are mainly used in animal feed in order to enhance the nutritional properties of animal feed products which attributes to increase animal productivity which in turn drives product demand. The global animal feed additives market is estimated to reach over USD 50.88 billion by 2027.

The increasing strategic collaborations, acquisitions, and joint ventures between major companies in the animal nutrition industry is also attributing to the growth of alternative protein market for animal feed. For instance, in December 2019, IFF and DuPont made an agreement of the merger of IFF and DuPont’s Nutrition & Biosciences business in a Reverse Morris transaction. The total value of the deal was estimated at USD 45.4 billion where DuPont shareholders ownership was 55.4% and the rest 44.6% was IFF’s.

The sudden outbreak of Covid-19 pandemic has led to the increase in prices of sugarcane molasses. Lockdown and travel restrictions have resulted in shortage of critical inputs such as lime, sulphur, and packaging materials which has attributed to the rising prices of fungal and yeast proteins. The disruption in the global supply chain has negatively impacted the alternative protein market for animal feed demand. Manufacturing plants have remained shut down for a longer period of time which has also adversely affected the market trends. 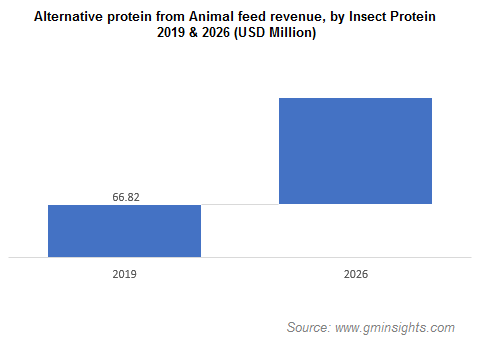 Alternative protein market for animal feed segmented on the basis of product type includes insect protein, soybean isolate, soybean concentrate, fermented soy protein, duckweed, single cell protein, hamlet protein, and others. Insect based proteins accounted for a revenue of USD 66.82 million in 2019 and is expected to grow at a rate of 10.7% during the forecast period.

Insect proteins have a high feed conversion rate and consist of essential amino acids, B12, iron, zinc, magnesium, sodium, potassium, and calcium which are required for optimum animal health. Moreover, insect farming is a very sustainable process and is eco-friendly since it produces less methane gas. The above-mentioned factors are driving the insect protein market which in turn is attributing to the market growth of alternative protein for animal feed. 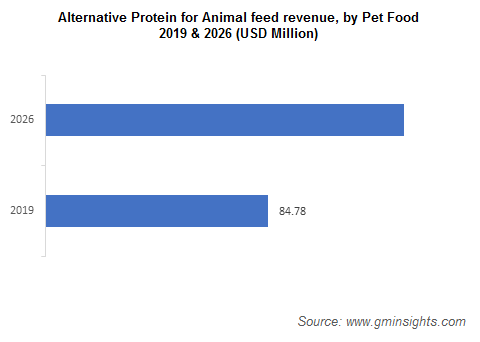 The alternative protein market for animal feed segmented on the basis of livestock includes poultry, swine, cattle, aquaculture, pet food, equine, and others. The pet food market size for alternative proteins for animal feed was estimated at USD 84.78 million in 2019 and is expected to register over 7.1% CAGR during the forecast period. Increasing prevalence of pet adoption, rising disposable income, and changing perceptions towards diet are expected to boost the demand for pet foods.

Pet owners are gradually shifting from traditional food items cooked at home to high-quality packaged pet food. Alternative proteins are widely used in the manufacturing of various pet food preparations owing to their numerous health benefits. Moreover, alternative proteins aid in improving digestive systems and immune systems of pets such as dogs and cats without any allergic reactions. The above-mentioned factors are responsible for the driving of the alternative protein market for animal feed for pet food during the forecast period. 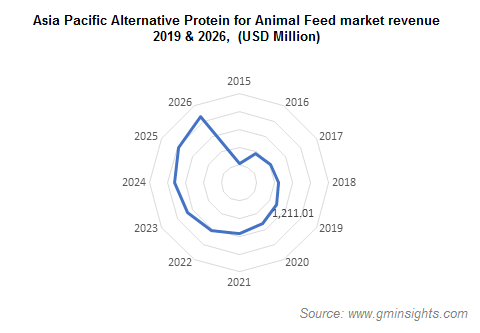 Asia Pacific alternative protein market for animal feed was estimated at USD 1211.01 million in 2019 and is expected to grow at a rate of 8.5% CAGR during the forecast period. Factors such as high resource availability, inexpensive labor and ambient environmental conditions are attributing for exponential growth rate in animal feed industry. Major animal feed producers and consumer nations of aquafeed in aquaculture include China, Vietnam, Philippines, Thailand and India.

China alone dominates the global market, the U.S being a major importer from them. Hence, high growth of animal feed industry in Asia pacific region is expected to fuel the demand of alternative proteins for animal feed during the forecast period.

Additionally, increasing meat & meat product consumption in countries such as China, India, Malaysia, and Thailand owing to livestock production coupled with easy availability of meat products because of robust distribution channels is another major factor attributing to the market growth of alternative proteins for animal feed in the region. For instance, the poultry meat consumption in India was estimated to be over 2500 tons and is expected to exceed 3000 tons by 2026.

In April 2018, Meat processor HK Scan announced that Faba Beans produced by Nordic Soya can replace soybean meal completely as a poultry feed. This is expected to add a new dimension to Nordic Soya’s existing product portfolio and open up new markets for its business expansion.

In October 2020, Deep Branch Biotech secured a funding of €2.5 million from the European Innovation Council (EIC) to scale up the process of sustainable generation of protein. This funding will be utilized in building a new facility in Netherlands-based Brightlands Chemelot Campus.

Global alternative protein market for animal feed research report includes in-depth coverage of the industry with estimates & forecast in terms of volume in Kilo Tons, and revenue in USD Million from 2015 to 2026 for the following segments: