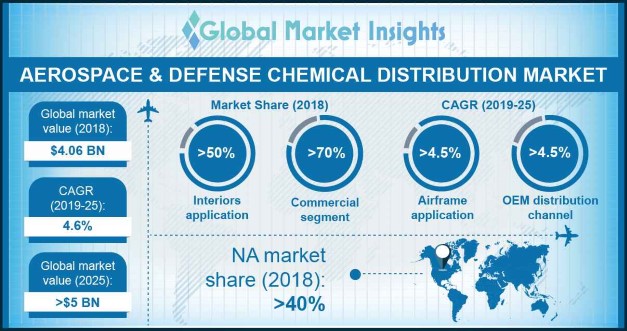 Growing demand for air travel in Asia Pacific region would be a significant growth enabler in the aerospace & defense chemical distribution market. In China, the number of people traveled through air transport increased from around 290 million in 2006 to about 1 billion in 2016. The key reason behind the growth of the surging air travel demand in emerging nations is economical airfares, rising middle-class income, and economic growth of major countries. The presence of low-cost airlines, such as AirAsia and Cebu Pacific, are creating air travel more accessible to the people in Asian countries.

Increasing military expenditure is another growth driver in this market which would increase product demand. In 2017, the global military expenditure was valued over USD 1.7 trillion and is likely to grow significantly in the coming years. Such increase would open new opportunities for aerospace & defense chemical distribution all over the world. Fluctuations in the prices of raw materials could deter the market growth in the forecast timeframe. Aerospace chemicals like mineral-based lubricants, used in aircraft engines are derived from petroleum-based products. The crude oil price in 2012 reached as high as about USD 100 per barrel which later dipped in 2016 to USD 35 per barrel. Such constant fluctuations in the crude oil prices could directly impact the final price of the aviation chemicals.

Interiors held the highest share, accounting for over 50% of the aerospace & defense chemical distribution market in terms of volume distributed in 2018. This is owing to growing usage of the cleaners & solvents in the aircraft interior parts. Major cleaning activities scheduled in an aircraft during transit stops include, cleaning of galley, passenger cabins, flight deck, toilet compartments, etc. Hence, as air travel increases the demand for cleaning the aircraft also increases. Hence, the growth rate in this segment is the highest as compared to the other segments.

Airframe is another important application area which is likely to grow at a CAGR of more than 4.5% over the forecast timeframe. Airframe is the mechanical structure of an aircraft system which comprises of wings, fuselage and empennage. Adhesives, sealants, paints, cleaners, etc. are some chemicals which are used in this segment to fulfill various purposes. These chemicals enhance the physical property of the airframe and helps to cope with the extreme temperature conditions.

OEM is likely to grow at a compound annual growth rate of more than 4.5% over the forecast timeframe. This is due to the significant usage of adhesives & sealants and paints & coatings products in new aircraft construction. Adhesives & sealants are utilized for bonding variety of aircraft structures, while paints & coating products are used in painting aircraft interior & exteriors. Increasing demand for new aircrafts will in turn create demand for aerospace & defense chemicals in this segment.

Commercial segment is likely to attain a aerospace & defense chemical distribution market share of more than 70% owing to the rising global demand for air travel. The global aircraft fleet is likely to increase from around 25,000 in 2018 to over 50,000 by 2038. Such growing trends would increase the demand for the product from this segment. Rising consumer spending, growing middle class income, strong economic growth, etc. are some factors driving the growth in the commercial segment.

North America is the dominant region in the aerospace & defense chemical distribution market, occupying a share of over 40% in 2016. The high market share is attributed to the presence of major distributors in this region. U.S. accounted for largest market share in the region owing to the presence of major aircraft manufacturers & service providers. U.S. military spending has been rising in past few years and reached around USD 650 billion in 2018. Increasing military spending would increase the need for aerospace & defense chemicals distribution in the forecast period.

Univar Inc. is an important market player with a widespread global network. The company has good market hold and provides diverse value-added services. The company has adopted strategic moves like mergers & acquisitions, opening sales centers, etc. to maintain its leading position. Wesco Aircraft is another significant player known for its expertise in aerospace industry. It has entered into supply agreements with various aerospace companies and offers a wide range of product portfolio.

Aerospace & defense chemical distribution is consolidated in nature due to some players holding major market share. These players act as a major link between product manufacturers and final consumers. Other than product distribution they also provide aftersales services. Rising developments in the aerospace industry and rising commercial air fleet would in turn spur growth in this market.