Winglets Market size surpassed USD 1.98 billion in 2018 and will showcase a growth rate of 8.9% from 2019 to 2026. Increasing production of passenger aircraft in order to meet ever growing air travel passengers demand will boost the market growth.

Globally, aircraft fleet sector has been estimated to grow at 4% rate per annum by the end of 2038. These trends will positively influence the aircraft production rate over upcoming years, which will further enhance winglets market demand in future. 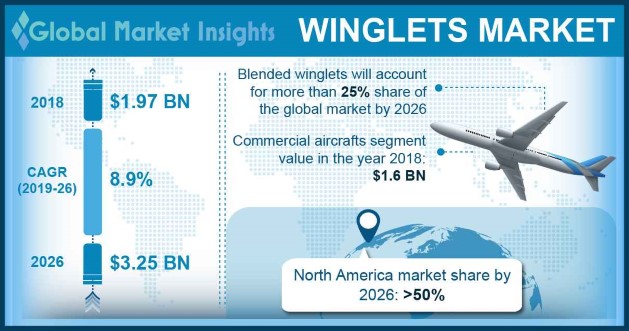 Another key growth enabling factor is increasing trend of airlines to install the product on in service aircrafts that enable airlines to enhance its performance and efficiency. For instance, in October 2019, Flydubai retrofitted its Being 737-800 aircraft with split scimitar winglets. Major airliners are working closely with MRO service providers and industry players to perform retrofitting activities during aircraft maintenance time, thereby reducing aircraft on ground time.

Similarly, Advanced Aero Services (AAS) has also announced to create an MRO facility at Shreveport Regional Airport, to serve international as well as North American airlines in near future. These will further boost the requirement for retrofitting of aircraft fleets in next few years, which is further going to increase the product sale.

Though these products have promising future in aircrafts industry ahead, but the challenges associated with the installation time and higher weight hamper the winglets market growth. On an average 25 days are required to perform in-service retrofit programme, which may vary depending upon resource availability.

Further, installation of these equipment increases aircraft weight. However, technological advancements and rising need for new aircraft will stimulate the market revenue.

Blended type will account for over 25% share of global winglets market throughout the forecast time span. These are widely used by several aircraft manufacturers including Boeing, Gulfstream Aerospace Corporation, Falcon, among others.

Additionally, usage of these products as standard equipment in aircrafts such as Boeing 737-900ER are supporting the movement towards sustainability. These winglets play a major role in reducing CO2 emission, and increasing the aircraft fuel efficiency. Presence of several authorized service providers that offer retrofit services across the globe will further support the product penetration over the forecast timeframe. 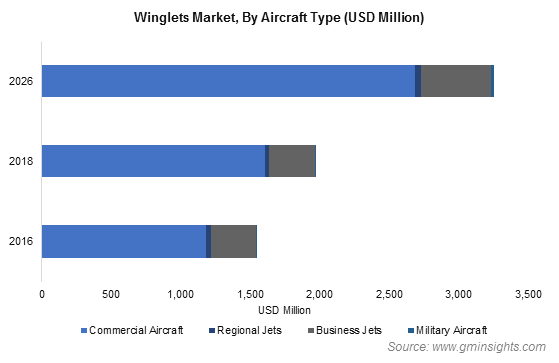 Commercial aircrafts are expected to have substantial market share over the projected time period, accounting for USD 1.6 billion in 2018. Narrow-body aircrafts accounted for over half of the market revenue share owing to rising presence of low-cost carriers across the globe.

Rising domestic air travels across emerging economies such as India and China and improving Revenue Passenger Kilometres (RPK) of airlines are expected to enhance narrow body aircraft sales. RPK has been estimated to account for around 36% of overall air passengers market in 2019, which will further grow at considerable rate over the study period.

A320 family will account for the highest market share of more than 30% through 2026 owing to adoption of new technologies such as low noise and efficient engines. A320neo which is newer version of A320 family are using sharklets as a standard equipment.

Growing demand for A320neo from several airlines across the globe is further supporting the market penetration. Sharklets enable A320 family aircrafts to payload capacity up to 450 kg with annual CO2 emission reduction by over 1,000 tonnes.

Many airlines are pushing for retrofitting of older model aircrafts

Retrofit segment will showcase considerable growth owing to adoption of the product by several airlines such as Air Asia, Qatar Airlines, Volaris, Interjet, Airarabia, among others. Stringent emission norms coupled with ability of product to enhance overall aircraft performance is driving the revenue generation. Additionally, aircraft manufacturers such as Boeing and Airbus have initiated retrofit programs for in service aircrafts which further supports the winglets market value. 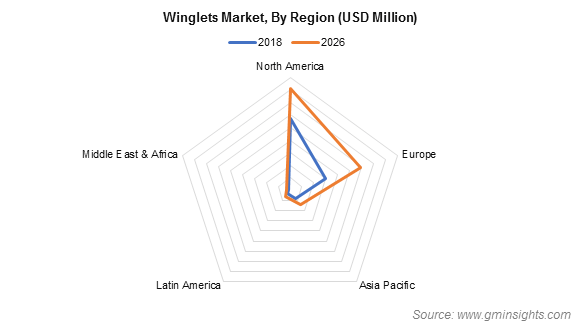 North America winglets market will account for the highest share of more than 50% among all the regions between 2019 and 2026. Growing production of new aircrafts in North America will be the key driving factor behind the market growth.

Prominent presence of aircraft manufacturers such as Boeing, Airbus, Bombardier among others along with growing aircraft production capacity will support the industry growth. Rising domestic air passengers demand coupled with increasing effort for limiting carbon emissions will create need for safe and efficient aircrafts, which will again stimulate market penetration.|

Some of the key strategies adopted by these players include, market expansion, new product development, production capacity expansion, etc. For instance, in January 2019, Aviation Partners Boeing announced that the company will install split scimitar winglets on South Africa’s Mango Airlines aircraft fleet. This enabled the company to enhance its presence in Middle East & Africa.

The winglets market research report includes in-depth coverage of the industry with estimates & forecast in terms of volume in Units and revenue in USD Million from 2016 to 2026, for the following segments:

The market size of winglets was surpassed USD 1.98 billion in 2018.
The industry share of winglets will showcase a growth rate of 8.9% from 2019 to 2026.
The North America market may dominate the industry, accounting for the highest share of more than 50% between 2019 and 2026, led by growing production of new aircrafts in the region.
The blended winglets will account for over 25% market share throughout the forecast timespan due to their usage by several aircraft manufacturers including Boeing, Gulfstream Aerospace Corporation, and Falcon.
The key players involved in the winglets industry include Aviation Partners Inc., Aviation Partners Boeing, Kaman Corporation, GKN Aerospace, and FACC AG.
A320 family will account for the highest market share of more than 30% through 2026 owing to adoption of new technologies such as low noise and efficient engines.
Customize this Report
Inquiry Before Buying