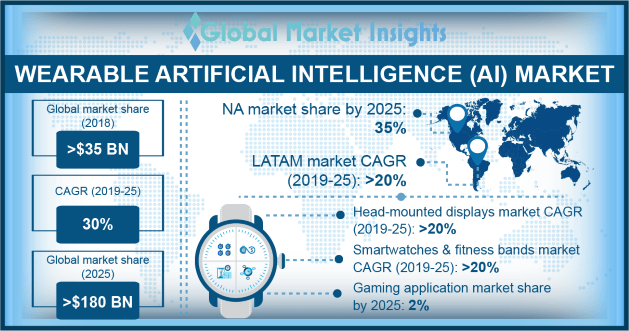 The wearable AI market growth is attributed to rising proliferation of advanced technologies including AI and 5G smartphone penetration. Smartphones are widely used for gathering and analysis of data collected from wearable devices. The exponential growth of the smartphone market has augmented the development of android & IoT-enabled responsive and user-friendly wearable device apps. Other factors accelerating market growth are the rapid urbanization and rising disposable income in developing economies, which dictate the wearable technology future trends. With rapid industrialization and rising employment in service-based industries, there has been a fundamental shift in consumer spending patterns toward consumer electronics products such as fitness & health monitoring smart wearables. The technology companies including Microsoft, Apple, Google, and other established players are expanding their market share with the introduction of new smart wearables, fueling market growth. 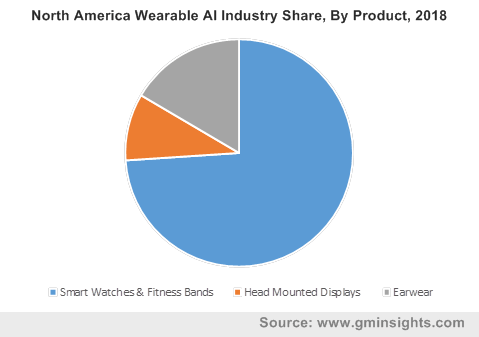 The smartwatches & fitness bands market is expected to grow at a CAGR of above 20% over the forecast timespan due to the rising efforts by technology companies for the development of smart analysis technologies including real-time health status analysis. The growing smartphone penetration coupled with fast connectivity is driving the adoption of smartwatches and fitness bands. The technology companies present in the market are partnering with luxury brands to provide high-end watches which provide users with enhanced insights into their health and access to controls without relying on smartphones.

The gaming application segment is estimated to hold a market share of around 2% by 2025 due to the rising usage of Augmented Reality (AR) and Virtual Reality (VR) in the gaming software console. The smart wearable device manufacturers are leveraging on various next-generation technologies in their product offerings such as interactive graphics to enhance the game’s entertainment quotient. The demand for gaming wearables is rising sharply as the applications developed for wearable devices have the capability to integrate motion sensing and gesture tracking to improve game experience.

The North America wearable AI market is projected to hold a dominant market share of around 35% by 2025 due to the growing popularity of wearable technologies in the countries including the U.S. and Canada. For instance, the Canadian Medical Association (CMA) is providing physicians with assistance in prescribing wearable technology in the form of policy guidelines. The CMA introduced Guiding Principles for Physicians Recommending Mobile Health Applications to Patients in May 2015, providing information to physicians about mobile health applications. Other factors driving market growth are smartphone penetration, advanced connectivity infrastructure, and the rapid usage of smart wearables in the healthcare sector.

Companies present in the market are focusing on the development of new smart wearables to gain a foothold in the market. Some technology companies present in the market are also focusing on the introduction of new applications, providing support to wearables. In March 2019, the company launched new products Fitbit Versa Lite Edition, Fitbit Inspire HR, Fitbit Inspire, and Fitbit Ace 2. These new products are affordable to customers worldwide and will expand the customer base. In November 2017, Apple launched a new application, Apple Heart Study. The new application helps to collect data on irregular heart rhythms and notify users with changes in heart strokes for Atrial Fibrillation (AFib).

Wearable AI is gaining popularity due to the rising usage of devices such as Google Glass and Fitbit, notably for fitness and healthcare. The wearable technology is becoming ubiquitous with its increasing applications in other sectors including consumer electronics, business, emergency service, and military & defense applications. The wearable industry is booming with innovations in the market at affordable prices. This has also facilitated the development of mobile applications for such devices. As the consumer demand for wearables is rising, consumer electronics manufacturers will be compelled to develop new wearables, which play an important role in the evolution of augmented reality technologies.

The market size of wearable AI surpassed USD 35 billion with demand of more than 150 million units in 2018.
The industry share of wearable AI is set to register CAGR of around 30% from 2019 to 2025.
According to this research report by GMI, North America is projected to hold a dominant market share of around 35% by 2025.
The smartwatches & fitness bands will grow at a CAGR of above 20% through 2025 led by rising efforts by technology companies for the further development of smart analysis technologies which includes time health status analysis.
Some of the key market players are Apple, Fossil, Facebook, HTC, Bragi, Fitbit, Garmin, Jabra, Xiaomi, Huawei, Samsung, Microsoft, ANTVR, Huami, and Google.
The market demand in the gaming application segment is owing to rising usage of VR and AR in the gaming software console.
Customize this Report
Inquiry Before Buying