Vitreoretinal Surgery Devices Market size valued at over USD 1.8 billion in 2021 and is expected to witness more than 2.9% CAGR from 2022 to 2028. The growing incidence eye related disorders like retinal detachment, macular degeneration, uveitis, and vitreous haemorrhage among other complications related to diabetic retinopathy are stimulating the market growth. 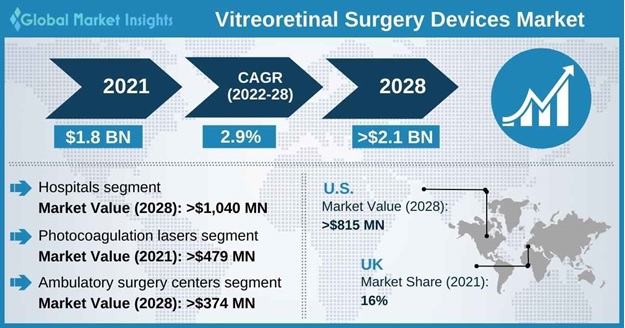 TAs per the Springer, in 2021, the prevalence of self-reported eye conditions was approximately 2.7% for glaucoma, 11.4% for cataract, and 3.8% for retinal degeneration respectively. This development will propel the number of vitreoretinal surgeries thereby driving the adoption of vitreoretinal surgery devices that would promote the industry growth. In addition to this, the growing geriatric population along with supportive government initiatives for augmenting awareness regarding eye-related disorders is further poised to render significant impact, influencing the product acceptance and vitreoretinal surgery devices market expansion.

The COVID-19 pandemic has emerged as an unprecedented health concern that has rendered significant impact on the vitreoretinal surgery devices market value. The coronavirus outbreak has affected the global economy and several industrial structures including the healthcare sector. In order to minimize the further transmission of SARS-CoV-2 virus, national lockdowns were imposed, and emergencies were declared in several countries. Hospital admissions and services were offered to the COVID-19 affected patients on priority basis, with majority of the other medical procedures on halt. The U.S. declared a national emergency and postponed majority of the non-emergency surgical procedures in outpatient and inpatient settings. This has led to the delay in multiple medical procedures including vitreoretinal surgeries across various countries that has affected the market.

The rapidly aging population is anticipated to spur the industry progression in the coming years. The WHO data estimates that the geriatric population is slated to double in the years from 2015 to 2050. The elderly population aged above 60 years is poised to showcase threefold growth during 2010 and 2050, reaching about 1.3 billion. Moreover, as per the United Nations Population Fund (UNFPA) estimates, by the year 2050, approximately 25% individuals in Asia Pacific region will be aged more than 60 years. Eye-related disorders are increasingly prevalent among the elderly population as aging affects vision and the ability to focus.

The increasing elderly population affected with vision related conditions is set to fuel the vitreoretinal surgery devices market demand. The most frequent causes of vision impairment among the aging populace include the age-related macular degeneration, glaucoma, cataract, and diabetic retinopathy among others. Due to the increasing susceptibility and impaired vision, the prevalence of these disorders is commonly profound in people aged 60 and above.

The photocoagulation lasers segment in the vitreoretinal surgery devices market exceeded USD 479 million in 2021. Photocoagulation lasers are applied in the treatment several eye disorders such the two leading causes of blindness in the U.S. including diabetic retinopathy and age-related macular degeneration. These precise laser-sourced devices reduce the risk of vision loss by cauterizing ocular blood vessels. 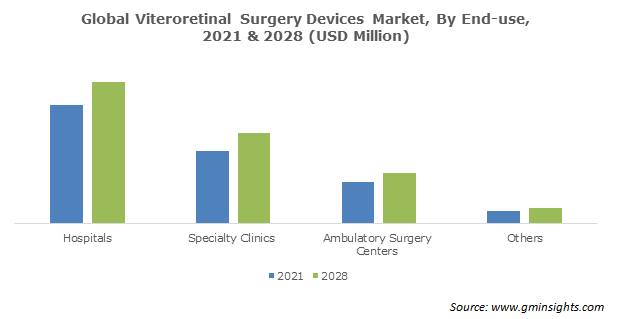 Due to these developments, the number of vitreoretinal surgeries conducted in an outpatient setting has surged steadily that is expected to benefit the market share. In addition to this, the increasing pressure to minimize surging healthcare costs and availability of efficient equipment that limit the surgical complications including the reduced risks of catching the retina is further set to spur the industry demand. 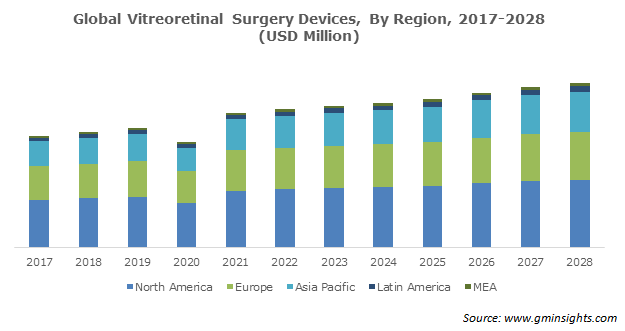 U.S. vitreoretinal surgery devices market is slated to cross USD 815 million by 2028 on account of the high acceptance of advanced devices and the rise in incidence of eye-related disorders that translates to increased vitreoretinal surgeries across the country. For instance, according to the Centers for Disease Control & Prevention statistics, an estimated 20.5 million citizens in the U.S. aged 40 years and above were suffering with cataract in one or both eyes, and around 6.1 million Americans had their lens removed surgically.

The overall number of individuals with cataracts was further projected to reach to 30.1 million by 2020. Similarly, approximately 1.8 million Americans aged 40 years and above were affected by age-related macular degeneration (AMD) and an additional 7.3 million Americans are at considerable risk of developing AMD. Such adverse conditions along with aging population are predicted to impel the adoption rate of vitreoretinal surgery devices in the country.

Strategies adopted by major players to surge the industry revenue

Vitreoretinal surgery devices market research report includes an in-depth coverage of the industry with estimates & forecast in terms of revenue in USD from 2017 to 2028, for the following segments:

Market size of vitreoretinal surgery devices crossed $1.8 billion in valuation in 2021 and is anticipated to record more than 2.9% CAGR over 2022-2028.
Photocoagulation lasers surpassed $479 million in 2021 as these lasers can be used to treat a wide range of eye disorders, including diabetic retinopathy and age-related macular degeneration, among others.
The ambulatory surgical centers may capture a valuation of $374 million by 2028 as advanced and miniatured vitreoretinal surgery devices are being extensively used in these centers to increase a patient’s comfort and reduce the total surgical time.
The U.S. market is estimated to go past $815 million by 2028 as advanced surgical instruments are being developed on a large scale to combat the rising incidence of eye-related disorders in the country.
Reputed organizations, such as Alcon, Inc., MedOne Surgical, Inc., Bausch & Lomb, Inc., Designs for Vision, Inc., D.O.R.C. Dutch Ophthalmic Research Center (International) B.V., and Peregrine Surgical, among several others, are positively contributing to the global market forecast.
Customize this Report
Inquiry Before Buying