U.S. Crustacean Market size exceeded USD 10.4 billion in 2019 and will grow at a CAGR of 5.4% from 2020 to 2026. The demand for crustaceans is increasing among consumers owing to its high nutritional value and low-fat protein. It contains zero carbs and is very low in calories. These factors make people include in their food diet. 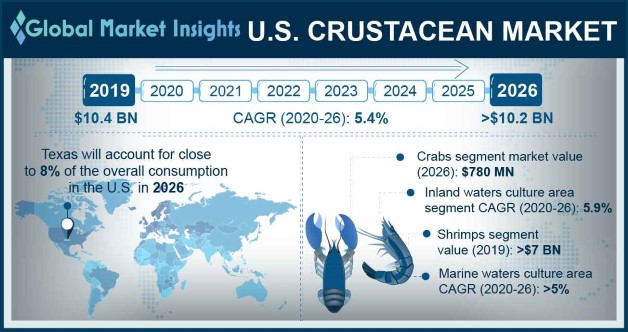 Crustacean belongs to family of arthropods that include crabs, crawfish, lobsters, prawns, shrimps and distinct species of sea animals. They are largely aquatic animals; however, some terrestrial, parasitic and sessile species also exist. Worldwide population is more inclined towards fresh and frozen food products. Shift in consumption pattern due to fast pace in lifestyle, individuals now prefer frozen food since they are more convenient to store, easy to prepare and provide high nutritional value. On an average, Americans consumed 16.1 pounds of seafood in 2018, according to the NOAA Fisheries. The level of fresh and frozen seafood consumption reached 12.3 pounds in 2018. Hence, availability of fresh and frozen crustaceans is contributing to the growth of the U.S. crustaceans market.

There is a higher demand for fresh & frozen seafood from Americans due to appealing taste and rich nutritional value such as proteins and minerals. Even though the per capita seafood consumption is increasing year-on-year, the U.S. consumers according to “USDA Dietary Guidelines for Americans” haven’t met the recommended level of seafood consumption.

This suggests that there is a huge potential for crustacean farmers, processors, and distributors operating in the industry. The fresh product consumption will increase with rise in logistics and supply chain efficiencies.

Surge in COVID-19 pandemic across the country has severely hit the tourism sector, leading to shut down of restaurant and hotels serving premium seafood. Covid-19 Impact can be witnessed more on demand side of crustacean’s value chain with ripple effects on supply side. Therefore, a number of fisheries that supplies restaurants with seafood faces difficulty to sustain.

Hotel chains and restaurant industry are facing downturns and seeking relief as their profits have plunged during the crisis. Suppliers of fresh and premium seafood products have been hit hard due to lack of demand for products including lobster and crabs, thus, triggering a decline in prices and fears for a glut of fresh product in the market.

Shrimps emerges as the most popular crustacean in the seafood industry 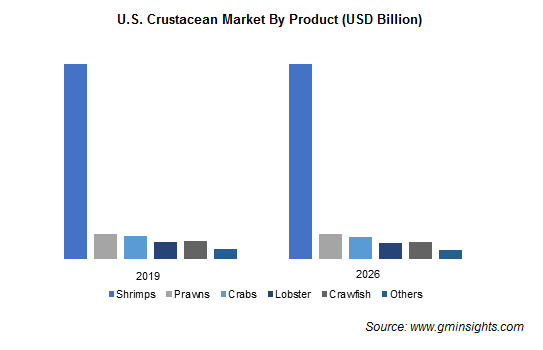 Shrimps segment of the U.S. crustacean market exceeded USD 7.0 billion in 2019 and is likely to grow at a decent growth rate over the forecast timeframe. Shrimps have recorded as the most consumed sea food in the entire United States with increased consumption of most popular varieties such as giant tiger shrimps, white leg shrimp, gulf shrimps, and royal red shrimps etc. The product has achieved consumption of over 4.6 pounds per person in the year 2018.

Crustacean provides vital nutrients to human body such as proteins, minerals and vitamins and boost the immune system. In 2017, U.S. shrimp consumption increased three-tenths of a pound per person. High disposable income, supportive food culture, and strong domestic aquaculture industry shall further proliferate the crustacean demand in the coming years.

Imported shrimps dominate the U.S. market. Shrimp are heavily traded commodities with countries in Southeast Asia and Latin America leading the production and supply, however a large chunk of consumption and import takes place in developed markets. Demand in U.S. states continues to grow as consumer preferences have evolved with rising incomes and a growing share of production is absorbed by domestic and regional markets. 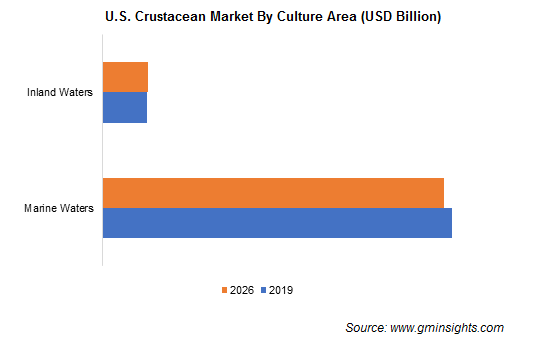 The U.S. crustacean market based on culture area is segmented into marine waters and inland waters. The marine waters culture area will register over 5% CAGR from 2020 to 2026. This segment will account for the largest share of close to 90% of the overall U.S. crustacean industry share in 2026. The natural ocean conditions in marine areas are conducive for crustaceans growth. In addition, coastal aquaculture which is practiced in artificial structures in areas adjacent to the sea, such as gated lagoons and coastal ponds generates large volume of crustaceans at a commercial scale.

However, the salinity is not stable in these structures and depends upon rainfall or evaporation, season and location. Furthermore, periodic high currents also affects crustacean farming in marine environment. Governments, foundations, nongovernmental organizations (NGOs) and local communities around the world are channeling substantial interest, capacity and funding to the establishment of Marine Protected Areas (MPAs).

Majority of seafood landing in the U.S. is mainly imported from several countries. This trend will likely sustain in coming years on account of increasing consumption of fresh and frozen seafood with shrimps among the leading product imported into the U.S. Nevertheless, NOAA Fisheries data claims that most of the imported seafood is caught by American fishermen at the first place and then the landing is exported overseas for processing and preparation in canned and frozen goods, and they are imported back as finished goods in the form of  fresh or frozen seafood products.

Alaska is the state that produces and supplies the most seafood in U.S. by pounds which comes in through Alaskan ports. In 2018, Alaska accounted for over 5.4 million pounds of caught product. Louisiana is also a primary production area owing to close proximity with the Gulf of Mexico. The region enjoys several advantages such as high regional demand for crawfish, warmwater for growing, and source of food which is primarily decaying plant material. Thus, Alaska’s crustacean market size is set to surpass USD 19 million by 2026.

U.S. Crustacean market is highly fragmented with presence of large number of product harvesters, processors, farmers, fisheries and distributors. The market witnessed huge potential during the period of 2015-2019. Surge in production capacity appears as key strategy to gain competitive advantage in the market.

The U.S. Crustacean market research report includes in-depth coverage of the industry with estimates & forecast in terms of volume in Kilo Tons and revenue in USD Million from 2015 to 2026, for the following segments:

The above information is provided on a state basis for the following: