Unmanned Ground Vehicles (UGV) Market size exceeded USD 2.5 billion in 2019 and is poised to grow at a CAGR of over 13% between 2020 and 2026. The market growth is driven by rapid technological advancements in the defense vertical along with increasing scope of UGV application across various sectors. 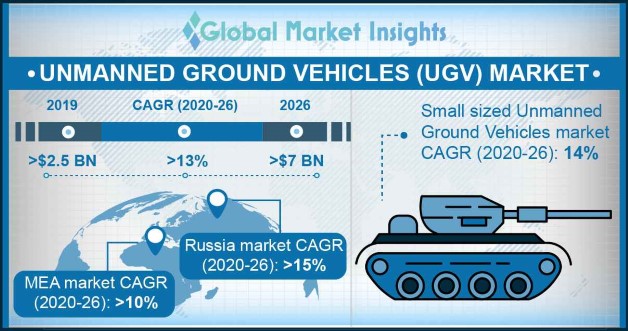 Various countries are investing significantly for upgradation of their defense capabilities, supporting the unmanned ground vehicles market growth. Better operational efficiency with no risk to human life is the major driver for the market. The UGV is used in various defense applications like search and rescue, combat support, transportation and other.

Major countries across the globe are allocating budgets and setting timelines for acquisition and deployment of UGV in their defense system. For instance, in 2015, Russia Military Industry Committee announced that they will be 30% of their kinetic weapons on remote control platform by 2025.

The requirement of UGV to operate on any terrain is increasing the demand for tracked vehicles, allowing them to capture the highest market share. Conventionally the tracked locomotion was expected to be loud and slow, but major market leaders are changing the industry trends by developing silent and fast-tracked vehicles.

For instance, Textron’s Grizzly, a UGV which operates on hybrid diesel electric engine which participated in 2018 exercise of the U.S. army for field operations demonstrated that it is much more silent and faster.

Combat support and EOD system will cater to highest market revenue of more than USD 500 million and USD 600 million respectively, backed up by ongoing research and development across numerous verticals. Governments are teaming up with various industry players to develop UGV’s which can perform manned and unmanned missions.

For instance, in September 2015, Milrem demonstrated Tracked Hybrid Modular Infantry System (TheMis), a multi-mission UGV, developed with support of Estonian Ministry of Defence. This newly designed UGV is mounted on two crawler tracks with a kerb weight of 850kg. 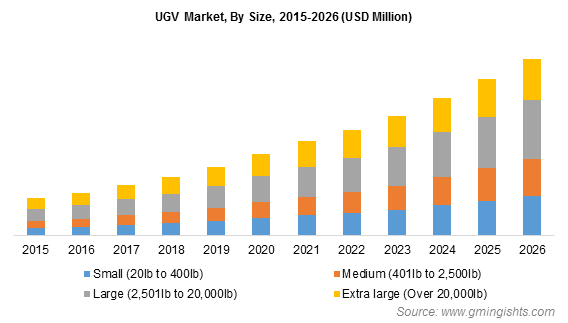 The small sized unmanned ground vehicles market will witness growth rate of more than 14% through 2026. Increasing requirement of small and medium sized UGV’s to effectively perform operations where it is practically not possible for human is supporting the market growth.

Technological developments in sensors and remote-control technologies are propelling the demand of autonomous UGV. Teleoperated semi-automatic UGV is also gaining popularity in order to maintain higher degree of access. Industry participants are developing UGVs with advanced operational capabilities such as automatic and semi-automatic mode of operations.

For instance, in October 2016, Clearpath Robotics introduced warthog, and amphibious UGV which includes internal processing unit, IMU, wheel encoders and mounting racks. This UGV can be controlled by a human operator and processes data in order to optimize best possible operations. 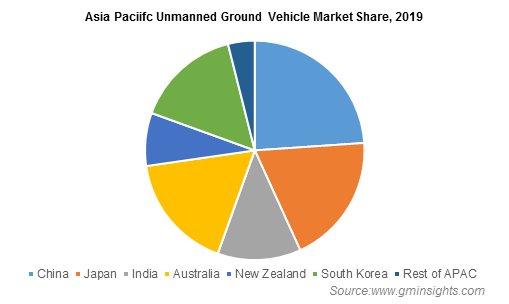 The North America unmanned ground vehicles market will accrue the maximum revenue share during the forecast period on account of presence of major industry players such as Lockheed Martin, L3Harris, Textron Systems and Northrop Grumman. Moreover, significant investments in defense and technology encompassing UGV’s has propelled the industry growth.

The Asia Pacific market us predicted to register substantial gains till 2026 owing to rapid technological advancement and experimentation done by major industry players backed up by support from the government.

For instance, in November 2019, Australian Defense Force (ADF) demonstrated the operations of fully automated armored vehicle at Majura Training Site in conjunction with BAE systems. The two combat UGV demonstrated were an upgrade to existing M113 armored vehicle and is a part of Robotics and Autonomous Systems Strategy.

The market research report on UGVs includes in-depth coverage of the industry with estimates & forecast in terms of revenue in USD from 2015 to 2026 for the following segments: