Underwater Connectors Market size exceeded USD 1 billion in 2018 and is estimated to grow at over 6% CAGR between 2019 and 2026. 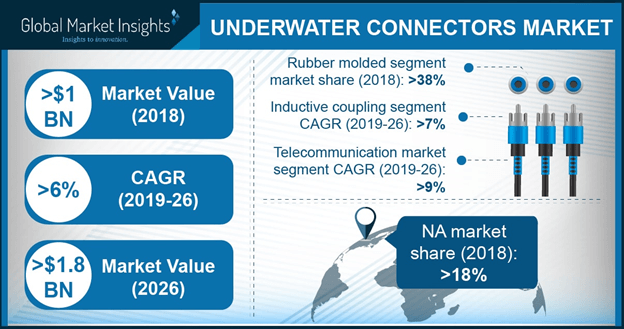 The rising investments in sea exploration and deep-sea expeditions are some of the major drivers for the underwater connectors market demand. Most of the countries are now focusing on the underwater mineral reserves and natural gas resources to cut down their crude oil import expenses. Rising technological advancements and the demand for high-speed data transmission are also contributing to market growth.

The major defense systems, in which the underwater connectors are installed include submarine, naval ships, and cruises. The underwater connectors market is segmented into various types including rigid shell, inductive coupling, underwater electrical mateable, and rubber molded connectors. The inductive coupling market is expected to grow at a CAGR of over 7% due to the high demand for electric generators and motors in various defense applications. The defense sector is engaged in enhancing and introducing new & advanced systems that will support the security at harbors. For instance, in July 2018, the Indian Navy launched an Integrated Underwater Harbor Defense and Surveillance System (IUHDSS). The system integrates electro-optic cameras, sonars, and radars to enhance the safety of valuable assets against asymmetric threats. The sensors installed provide real-time situational awareness for the analysis and monitoring of the harbor.

Oil & gas exploration activities involve a substantial amount of data and power transmission from sea to the shore. The data is transferred with the help of electric and fiber optic cables. The industry participants are engaged in developing the underwater connectors with superior capability and support the efficient working of subsea systems even under harsh underwater environments. For instance, in May 2019, Hydro Group Plc introduced Hydro Rubber Moulded (HRM) underwater connectors with a wide range of sizes, combinations, and voltages. Underwater connectors offer a superior degree of flexibility due to the use of high-quality materials including brass, titanium, PEEK (Polyether Ether Ketone), and stainless steel on flanges, bulkhead, and panel mounts. 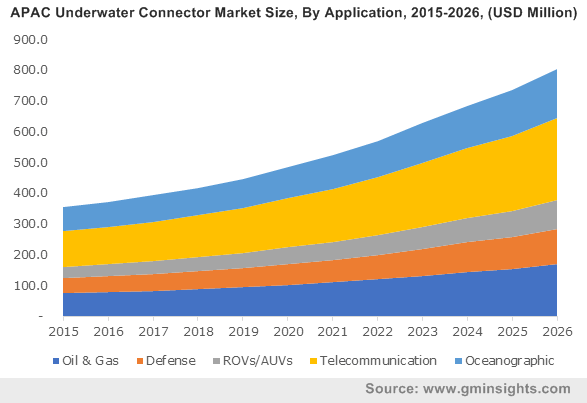 The telecommunication market segment is expected to grow at a CAGR of over 9% due to the presence of developing nations in the regions including India, China, Malaysia, and Singapore. Increasing data consumption across the region is promoting the telecommunication market. The major industry players are engaged in developing advanced cables and connectors, which can display capabilities to transfer several terabytes within seconds to serve the potential market. Additionally, several other factors including increased coverage of satellites and introduction of the 5G network will also supports the growth of the telecommunication market. For instance, in October 2019, China launched commercial 5G that provides high-speed internet and data transmission to expand the 5G network coverage in over 50 cities in a short timeframe. 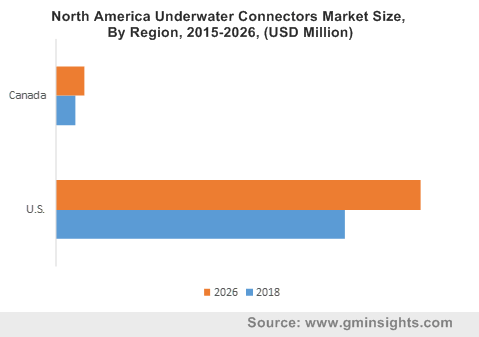 North America held a market share of over 18% in 2018 due to the presence of major market players in AUVs/ROVs, drilling systems, and OEMs. The industry players in the region are engaged in providing enhanced support & services to the defense sector to strengthen the coastal areas. The enhancement also refers to contracts related to the modification of underwater vehicles over the study timeframe. For instance, in September 2019, Hydroid Inc., a subsidiary of Kongsberg Defense, was offered a modification contract from the U.S. Navy to provide support & modification of the Mk 18 family of UUV systems.

The U.S. underwater connectors market holds a majority of the industry revenue share in North America due to the presence of large manufacturers and the entrance of software providers in the market. For instance, in October 2017, Facebook and Microsoft laid over 6,000 km high-speed internet cable. The cable was laid across the Atlantic and stretches from North Virginia in the U.S. to Bilbao in Spain. The new high-speed internet started its service in 2018 and supported over 70 million high-definition streaming at once.

The underwater connectors market research report includes in-depth coverage of the industry, with estimates & forecast in terms of revenue in USD from 2015 to 2026, for the following segments: