Thin Film Solar Cells Market size exceeded USD 2 billion in 2022 and is projected to expand at more than 9% CAGR from 2023 to 2032, owing to the rising dependency on renewable energy for electricity generation.

Cost-cutting clean energy technologies such as solar photovoltaic modules have gained momentum as ideal solutions to tackle the climate crisis worldwide. According to data from the U.S. EIA, close to one-fifth of all electricity was estimated to be generated from solar, wind, and hydropower by 2022. A shift from conventional fuels to sustainable alternatives is also being observed globally, resulting in increased investment in solar PVs. Such factors will contribute to the production of thin-film solar flexible cells as an affordable energy option over other solar technologies. 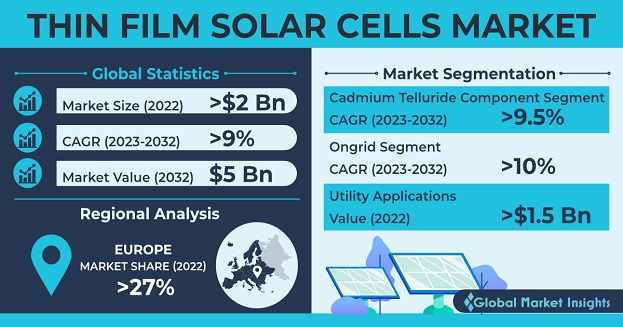 Despite the growth trajectory, the presence of renewable energy substitutes including wind, hydroelectric, and geothermal energy may create roadblocks to thin film solar cells market development. Solar power projects are also associated with longer payback periods and long-term investments, which may limit the installation of thin-film solar cells for energy generation. However, government emphasis on the development of large utility-scale solar PV projects is expected to create growth opportunities for the industry.

Thin film solar cells market from the cadmium telluride (CDTE) component segment is slated to exhibit over 9.5% growth rate through 2032, considering the high absorption rate, among other attributes. The bandgap energy of the CDTE component can also be tuned between 1.4 and 1.5eV, making it an optimal solution for converting solar energy into power using a single junction. Government agencies are also making considerable investments in CDTE technology to amplify solar energy deployment, For instance, the U.S. DOE introduced a USD 20 million Cadmium Telluride (CdTe) Accelerator Consortium in August 2022, to reduce the costs of CDTE PV technology, the second most common solar technology after silicon, further augmenting product reach. 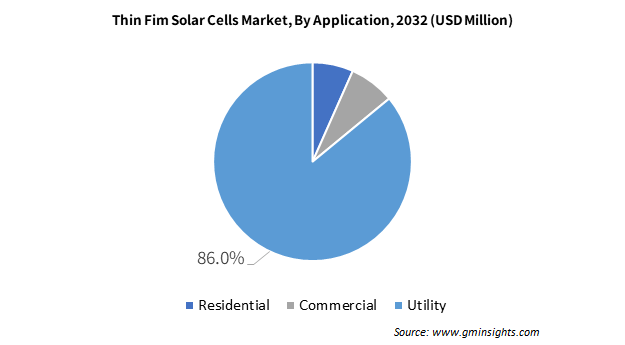 Thin film solar cells market value from utility applications reached over USD 1.5 billion in 2022, on account of the increasing targets to lower dependence on fossil fuels. For example, the European Commission proposed a solar rooftop requirement for public and commercial buildings by 2027 and new residential buildings by 2029 to help Europe become independent from Russian gas. Additionally, R&D efforts to reduce installation costs, alongside the integration of smart monitoring technologies will also stimulate the need for utility-scale thin-film solar PV cells.

In terms of connectivity, the thin film solar cells market size from ongrid segment is set to register nearly 10% gains between 2023 and 2032, given the strong focus on renewable energy transmission and distribution network development. For instance, in India, the Union Ministry of Power announced plans to integrate a 500-GW clean energy transmission capacity by 2030, leading to increased connection of solar parks with the grid. Moreover, the introduction of varied policies concerning net metering and Feed-In Tariffs will boost the requirement for on-grid thin film solar cells. 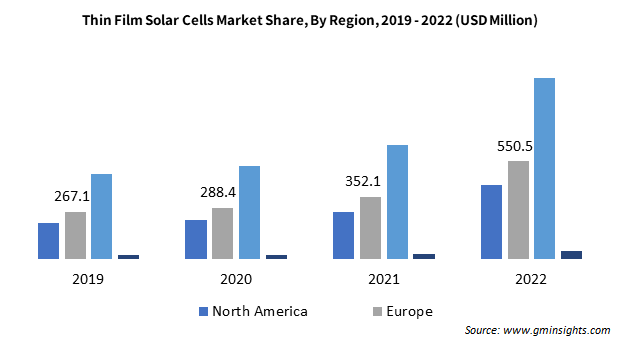 Europe region held around 27% share of the global thin film solar cells market in 2022, as a result of the strong focus on emission reduction to achieve carbon neutrality. With the European Climate law, the target for 2030 has risen to close to 55% net GHG emission reductions as compared to 1990 levels. Such factors, along with the rising consumption of clean energy and energy efficiency awareness among consumers, are anticipated to proliferate the development of thin film solar cells across the region.

Strategic collaborations among industry players to define the industry landscape

For instance, in December 2022, First Solar inked an agreement with National Grid Renewables for the supply of 1.6-GW DC of its CadTel technology-powered Series 7 thin film modules between 2026 and 2027. This agreement was part of its commitment toward solar technology for near-term projects, thereby enabling the companies to establish a strong footprint in the industry.

The COVID-19 pandemic and the resultant financial shock posed a greater risk to investments from SMEs and individuals in distributed solar PV and other renewable energy applications. Compared to large-scale projects, these investments were also at higher risk of cancellation or delay, which may have asserted a negative influence on thin film solar PV production. However, the gradual shift from conventional energy sources to utility-scale solar PVs and other renewables will likely add impetus to the industry growth over the foreseeable future.

The thin film solar cells market research report includes in-depth coverage of the industry with estimates & forecast in terms of “MW” & “USD” from 2019 to 2032, for the following segments:

The market size of thin film solar cells crossed USD 2 billion in 2022 and is anticipated to register nearly 9% gains through 2032, given the increasing reliance on renewable energy for electricity generation.
The cadmium telluride (CDTE) component segment is slated to exhibit over 9.5% CAGR between 2023 and 2032, considering the high absorption rate, among other attributes.
Europe industry held over 27% of the revenue share in 2022, as a result of the strong focus on emission reduction to achieve carbon neutrality.
Prominent companies functioning in the global industry include SOLARA GmbH, Toledo Solar, Trony Solar Holdings Co. Ltd., Hanergy Holding Group Ltd., Oxford Photovoltaics Ltd., Ascent Solar Technologies, Inc., and First Solar, among others.
Customize this Report
Inquiry Before Buying