Synthetic Lubricants Market size is expected to reach over $5 billion by 2023 with an estimated growth rate of over 4% from 2016 to 2023. Increasing demand from industrial and automobile sectors in Asia Pacific subject to installation of new machines coupled with increased branded cars sales will drive the global market during forecast period. 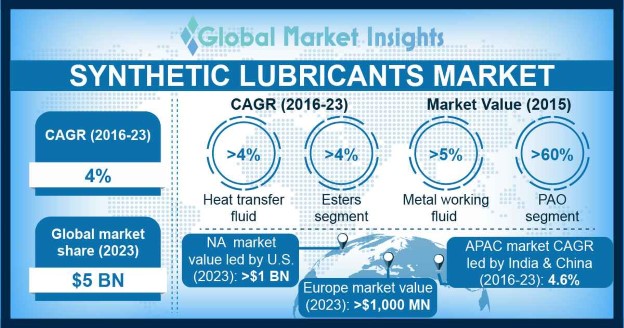 Automotive applications may dominate the industry owing to increase in automobile sales mostly driven by the U.S., China, India, and Brazil, which will foster the synthetic lubricants market growth in future. China automobile sales increased from 9.3 million to 23 million units in 2014.

Gulf Cooperation Council natural gas production reached 369.2 BCM in 2012 from 207.5 BCM in 2005. Growth in personal care, food & beverage, automotive, and construction sectors in emerging nations including UAE, Qatar and Saudi Arabia, has shifted political emphasis towards the development of natural gas which will positively influence the synthetic lubricants market value.

Group IV was valued over 400 kilo tons in 2015 and is expected to witness growth rate over 4% from 2016 to 2023. Wide adoption of PAO in automotive engine with OEM recommendation in brands including Volkswagen and BMW will complement the synthetic lubricants market outlook.

Ester segment is set to exceed USD 1.7 billion by 2023. Increase in ester demand in reciprocating compressors will stimulate the business growth during forecast period.

Engine oil contributed to 40% of global synthetic lubricants market share in 2015 and is expected to witness growth rate at over 4% by 2023. It offers excellent firm protection, high operating temperature range and increased drain interval. 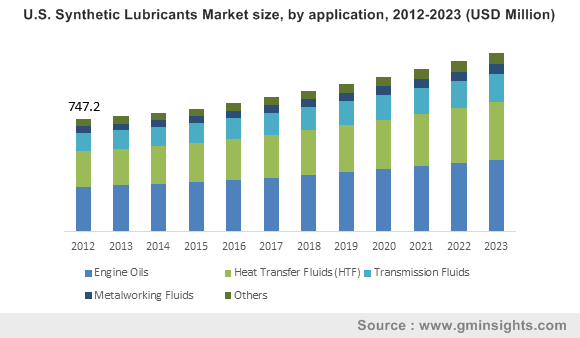 Asia Pacific led by India and China is expected to reach over 200 kilo tons by 2023 with 4.6% CAGR anticipation from 2016 to 2023. Increasing automobile sales is predicted to stimulate the synthetic lubricants market statistics in future. It has wide applications in automobile industry subject to its superior properties with high performance when compared with mineral products.

Synthetic lubricants are procured from pure chemicals rather than refined from crude oil. They can be used in both high and low temperatures. They improve oxidation resistance, thermal stability, low-temperature properties and reduce residue formation, flammability, and lower evaporation losses. They also help to reduce fiction and thus improve fuel efficiency and equipment life. Increasing demand for automobiles coupled with rising middle-class economy is expected to drive the synthetic lubricants business growth during forecast period.

Synthetic Lubricants market research report includes in-depth coverage of the industry with estimates & forecast in terms of volume and revenue in Kilo Tons and USD Million from 2012 to 2023, for the following segments:

According to report, Synthetic Lubricants Market size is estimated to be pegged at $5 billion by 2023.
Overall Synthetic Lubricants Market recorded a remuneration of $5 billion in 2016 – 2023.
According to the report published by Global Market Insights Inc., the synthetic lubricants business is supposed to attain $5 billion (USD) by 2023.
Positive automobile production outlook and abundant availability of natural gas in GCC are the major factors expected to drive the growth of global market.
Exxon Mobil, Shell, British Petroleum, Total, Chevron, Fuchs Group, Pennzoil, Amsoil Inc., Kendall (Phillips), Valvoline, Castrol are some of the top contributors in the industry.
The engine oil segment registered a highest market share in 2015 and is projected to record a remarkable growth rate throughout the forecast period.
Customize this Report
Inquiry Before Buying