Stealth Coating Market size was valued at around USD 42.9 million in 2020 and will exhibit a growth rate of over 6.5% from 2021 to 2027 owing to increasing product demand in the aerospace & defense industry, vehicles, military weapons, and submarines and the growing demand for UV protective coatings in the automotive industry.

Stealth coating is a radar absorbing substance used on aircraft in order to lower radar cross-section, making it harder to be detected by radars. Stealth coatings are made up of iron particles in high concentrations and a polymer matrix. Polyetherimide, epoxy, PES, PPS, PEEK, isocyanate, and polyimide are some of the thermoplastic polymers that are appropriate for stealth coatings. Stealth coatings are also used on a variety of other surfaces including phone, tablet & computer screens, and automotive, among others. 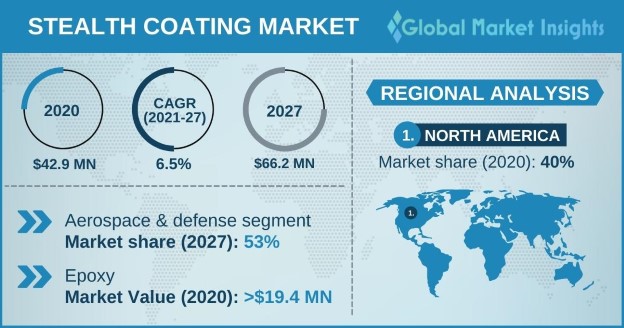 The growing use of stealth coatings in industries such as aerospace and defense, electronic products, and automotive, particularly in nations including the U.S., China, Spain, and Russia, is projected to boost the global stealth coating market. Furthermore, the surging demand for stealth technology in the aerospace industry for bombers & fighters, tanks, and helicopters will support industry expansion over the coming years.

However, the high product cost and slowdown of aircraft production in many countries due to the COVID-19 pandemic will hamper the global stealth coating market. Nevertheless, rising investments in the development and production of stealth ships, aircraft, and drones in many countries, including China and India, will offer new growth opportunities to the overall stealth coating industry. 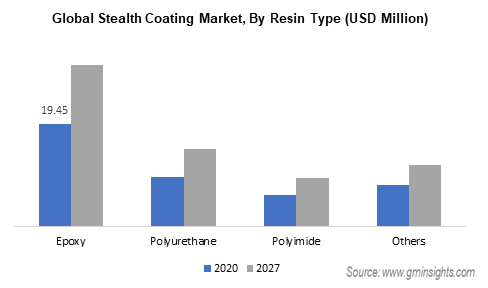 Epoxy dominated the global stealth coating market with revenue of over USD 19.4 million in 2020 and is projected to grow at a CAGR of 6.8% through 2027 due to increasing applications in vehicles and the aerospace industry.

The aerospace & defense segment is anticipated to account for the largest market share of around 53% of the global stealth coating market by 2027 owing to the increasing interest of the defense sectors. Stealth technology plays a key role in the next-generation military assets such as weapon systems, aircraft, submarines, ships, ground vehicles, and personnel. Stealth coatings make aircraft, missiles and drones invisible to radar. Stealth coating is cheaper than buying a stealth aircraft, and it is cost-effective by adding a layer of radar absorbing stealth coating.

Furthermore, the surging application of stealth coating in automotive industry is also projected to boost product consumption. Stealth coatings are invisible, durable, and provide a safe way to protect cars from chips, scratches, road debris, and malicious damages. The global car production increased by 2.36% in 2017 to account for 73.45 million units from 72.11 million units in 2016.

North America to witness significant growth throughout the assessment period 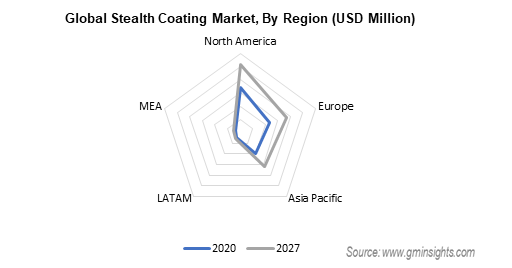 The North America accounted for 40% of market share in 2020 and is forecast to grow at a CAGR of 6.3% between 2021 and 2027. This growth is majorly attributed to the large presence of major aircraft manufacturers in the U.S. focusing on advanced technologies. The increasing budgets on the military & defense sectors will further support the stealth coating market segment growth in the U.S.

For instance, in 2019, the budget for the defense sector was around USD 686.1 billion, and in 2020, it increased by 13.4% to USD 778 billion. According to the 2021 World Air Forces report produced by Flight International in collaboration with Embraer, the U.S. air force, army, navy, and marine corps collectively operate a little over 13,000 military aircraft. Boeing, Lockheed Martin, and Northrop Grumman are among the market leaders.

Product expansion is one of the major strategic outlooks

The stealth coating market report includes in-depth coverage of the industry with estimates & forecast in terms of volume in tons & revenue in USD million from 2017 to 2027 for the following segments:

The stealth coating market share accounted for nearly USD 42.9 million in 2020 and will expand at a rate of 6.5% through 2027 with soaring product demand in the aerospace & defense sector.
Stealth coatings are radar absorbing substances that are utilized on aircrafts for reducing radar cross-section, making its detection by radars harder.
The share of epoxy to the total stealth coating industry revenue will grow at a CAGR of 6.8% owing to surging applications in the aerospace and vehicles industry.
The stealth coatings market size from aerospace and defense application will account for 53% of the industry revenue due to rising product application in next-generation military assets.
Major stealth coating manufacturers include Intermat Defense, CFI Solutions, Hyper Stealth Technologies Pvt. Ltd., MWT Materials, Inc., Micromag, Surrey NanoSystems, and others.
Customize this Report
Inquiry Before Buying