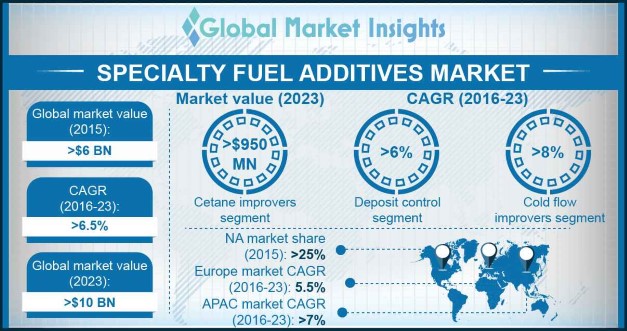 Rise in high toxic emissions due to expansion in the manufacturing sector along with increased usage of vehicles has induced the law makers to make stringent regulations across the world, which is driving specialty fuel additives market. Upsurge in biofuel consumption across various industries will augment the global market. One of the widely used biofuels is ethanol, which acts as an additive to gasoline.

The Environmental Protection Act of the U.S. has made it mandatory for heavy vehicles to use cleaner diesel with low sulfur content. Low sulfur content requires cold flow improvers which is a type of specialty fuel additive. This act is expected to positively influence the specialty fuel additives market. In the U.S., consumption of ultra-low sulfur diesel (ULSD) containing 0-15 ppm (parts per million) in 2012 was stated to be 1,255.5 million gallons.

Deposit control segment consumption is expected to surpass 3,800 kilo tons with CAGR exceeding 6% through 2023. They are used in gasoline and diesel to control and remove deposits such as soot and sludge which cause harm to the vehicle engine and reduce performance. Increasing global motor vehicle production (more than 90 million units in 2015 from 80 million units in 2011) will positively impact specialty fuel additives market share.

Cetane improvers are used in diesel to reduce ignition delays in the engine. They also improve cetane number leading to better performance of the vehicle. Increasing preference towards fuel economic measures is expected to drive this segment in the global market. The global cetane improvers segment will exceed $970 million by 2023 owing to increased ULSD consumption. Cold flow improvers segment is anticipated to witness gains over 8% with volume share of approximately 7.5% in 2023. 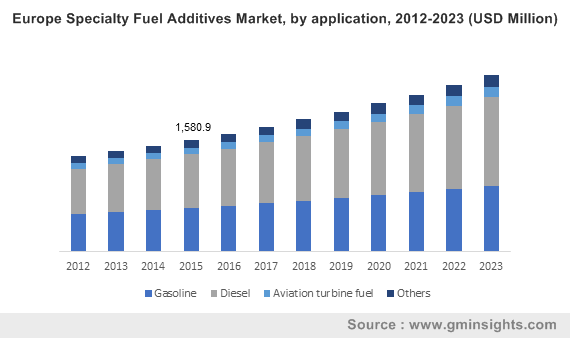 Diesel application will be driven by the APAC region with estimated gains over 6.5% through 2023 owing to substantial usage of diesel in Asia, particularly India, China, Indonesia and Thailand. Diesel is a more polluting fuel as compared to gasoline, which makes additives critical to increase the economy of the vehicle.

Europe led by UK and Germany was worth over USD 1.5 billion in 2015 and will witness 5.5% growth rate during forecast timeframe. Asia Pacific was driven by India and China, and together accounted for over 40% of total volume consumption in 2015. APAC is expected to grow at CAGR exceeding 6% during the next 8 years. This can mainly be attributed to growing demand for automobiles in India due to increase in disposable income.

Specialty fuel additives market analysis is partly consolidated and competitive, as the top industry participants accounted for below 50% industry revenue share in 2015.

Some of the major companies include Innospec Inc, Chemtura, Infineum, Lubrizol corporation, BASF SE and Baker Hughes. In December 2015, Chemtura announced plans to expand its production capacity for antioxidants (ADPAs, a type of specialty fuel additive) in Italy. This expansion includes building a new manufacturing facility. In 2014 and late 2015, the company increased ADPA capacity at Elmira site in Ontario, Canada.

Specialty fuel additives market research report includes in-depth coverage of the industry with estimates & forecast in terms of revenue in USD billion from 2012 to 2023, for the following segments: