Growing adoption of alternate energy coupled with increasing number of decommissioned panels will drive the global solar panel recycling management market. In Germany, the total volume of decommissioned panels was exceeding 75,000 tons in 2015 as against more than 50,000 tons in 2010. Increasing number of solar farms coupled with stringent government regulations towards effective waste disposal and recycling will drive the market share over forecast timeframe. In 2016, the cumulative mass of installed panels was more than 4 million tons. 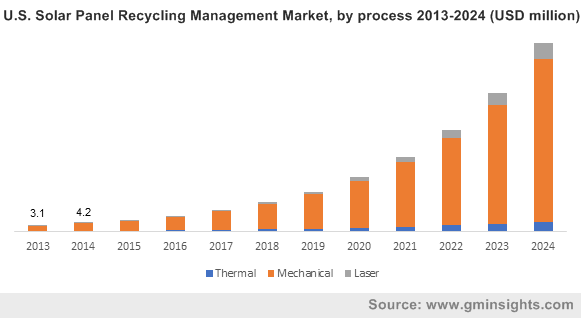 Strict regulations to control the growing number of panel waste will stimulate the market value during forecast period. In 2012, the Waste Electrical and Electronic Equipment (WEEE) Directive 2012/19/EU stipulated that PV system manufacturers must take up the responsibility to efficiently recycle decommissioned systems and effectively dispose electronic waste.

PV Cycle (PVC) is a pan-European initiative boost the investments made for setting up PV panel recycling units in a public private partnership model. As per the model, there will be proactive participation from local governments and private investors willing to invest in the industry. The WEEE has introduced two financing approaches including individual pre-funding and contractual agreements.

Solar panel recycling management market size from thermal process was over USD 2 million in 2015 and is likely to witness substantial growth by 2024. Thermal process currently has a limited adoption scope but is expected to gain wider acceptance during the forecast period due to decreasing silicon content in panels.

Mechanical process will exceed USD 300 million by 2024, as it has wide adoption across the globe owing to its process safety coupled with increasing adoption of polycrystalline panels. Laser processes are predicted to grow over 45% over the forecast period. Adoption of laser technology is still in nascent stages and is expected to witness strong growth after 2020.

Solar panel recycling management market from thin films PV cells are set to grow at over 40% to 2024 owing to large scale adoption subject to affordable prices with excellent quality and longer shelf life.

Early losses shelf life segment is expected to register around 35% CAGR during the forecast period. The average shelf life of a solar panel is 30 years however, due to weather conditions and maintenance issues, panels need to be decommissioned earlier than expected.

Normal losses are predicted to exceed USD 300 million by 2024, subject to end of a panel’s shelf life. Discarded panels are collected together and recycled to recover components that can be reused, further reducing the manufacturing cost of PV panels.

U.S. solar panel recycling management industry valued above USD 5 million in 2015 and is expected to witness significant growth from 2016 to 2024 owing to high adoption of PV systems. Decommissioned PV panels volumes increased from over 18,000 tons in 2010 to over 30,000 tons in 2016.

Germany solar panel recycling management market is set to surpass over USD 24 million by 2024. Germany was one of the first countries in the world to install PV panels on a large scale and encourage adoption of alternate sources of energy. Japan is predicted to grow over 30% from 2016 to 2024. The Ministry of Economy, Trade and Industry had announced in 2008, its intention to install panels in 70% of residential areas of Japan and has followed up with investments, subsidies and feed-in-tariff initiatives.

Chile market revenue will witness growth over 40% over the forecast timeframe. Chile is expected to witness cumulative waste volumes of decommissioned PV panels of over 45,000 tons by 2024, making it a large market for panel recycling.

In 2015, Sunvault Energy Inc. purchased 50% stake in CleanGen Inc., Canadian waste-to-energy firm. CleanGen is an Aborigin company with a net income about $1.5 million in 2014 and gross revenues more than $5 million.

Solar energy is at the foremost of the clean energy adoption initiatives, as an increasing number of governments and world bodies are encouraging its adoption to reduce dependency on non-renewable sources of energy. Increasing market demand can be attributed to the first wave of panel adoption in the 1990s and the industry is likely to undergo a paradigm shift over the next decade. The average life of a PV panel is 30 years and needs to be decommissioned afterwards, which means the panels installed in the late 90s will need to be recycled now.