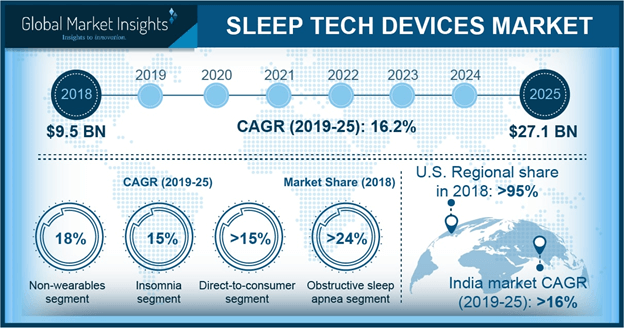 In early 2000’s, wearable technology that could track different health parameters gained momentum. In the year 2000, Sleep Number introduced sleep number smart beds. Later, brands such as Fitbit, Nike+ and others launched sleep tech devices that track and monitor health data. As the technology evolved, devices dedicated to monitoring sleep were developed. People started adopting theses sleep tech products to overcome sleeping disorders. In 2013, Fitbit, one of the prominent players, launched Fitbit Force smart watch that could measure the quality of sleep. After several years, other companies such as Xiaomi and Samsung also started developing wearable technology that could analyse the sleeping patterns. Currently, sleep tech industry is in the developing phase and is yet to witness numerous growth opportunities on introduction of advanced technology. 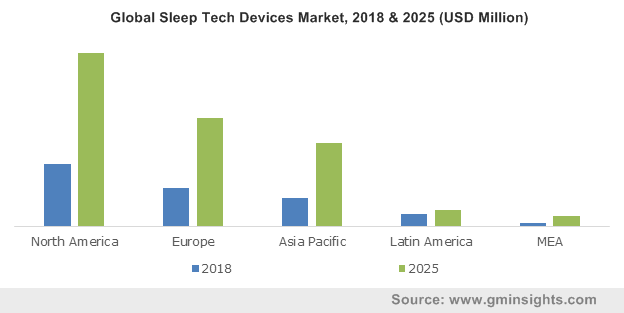 Increasing reliability on sleep tech devices has motivated the industry players to introduce upgradations in the existing devices. People suffering from sleeping disorders usually rely on sleep tech devices. Significant percentage of people in the U.S. utilize such devices before going to sleep. This scenario proves beneficial for the industry growth as it raises the adoption of sleep tech devices. Moreover, several companies have also developed smart watches that can be connected to smart phones, thereby helping in easy integration of sleep data. The tracker available in market possess commendable efficiency that has boosted their preference. Therefore, introduction of novel technology has stimulated the industry growth.

Based on type, the sleep tech market is bifurcated into wearable and non-wearable devices. Wearable segment of sleep tech industry held around 76% revenue share in 2018 and is expected to witness similar trends in the forthcoming years. Increasing stress levels and other lifestyle disorders has impacted the sleep hours of individuals in developed as well as developing countries. Wearable wrist watches experienced high demand due to introduction of advanced technology in such devices. Philips has developed a wristwatch that has natural frequency technology. This technology improves sleep cycles and lifestyle of individuals suffering from stress and other sleeping disorders that will escalate the segmental growth.

Based on gender, the sleep tech market is divided into male and female. Male segment was valued over USD 5 billion in 2018. Considerable revenue share can be attributed to the lifestyle changes and sedentary work culture that has led to stress as well as sleep disorders in individuals. According to the survey conducted by the Consumer Electronics Association, out of the total population using sleep tech devices, millennials accounted for major share. Males are susceptible to stress and sleeping disorders that increases the adoption of sleep tech devices amongst them, thereby stimulating the business growth. Moreover, prevalence of sleep apnea in the middle-aged men is much higher as compared to women. Hence, the above-mentioned factors will boost the segmental growth.

Insomnia affects over 25% of the U.S. population that enhances the demand for sleep tech devices

The applications of sleep tech devices are insomnia, obstructive sleep apnea, environmental sleep disorder. Insomnia segment of sleep tech devices market is expected to witness around 15% growth throughout the forecast timeframe. According to a survey, around 25% of Americans experience acute insomnia every year. Globally, millions of people suffer from insomnia that raises the adoption of sleep tech devices. Recently developed sleep monitoring and enhancing devices help in optimizing the daily activities that surges the segmental growth.

Favorable demographic trends will drive the demand for sleep tech devices in the U.S. 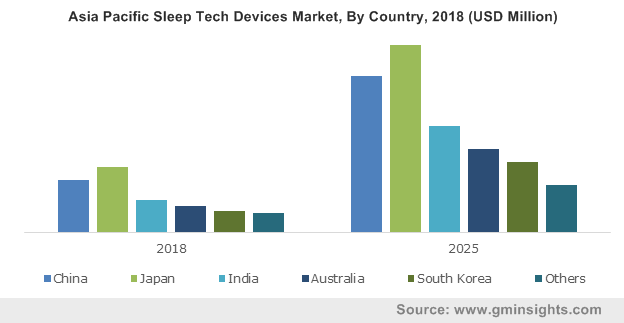 The U.S. sleep tech devices market held over 95% of revenue share of North America in 2018 and is expected to foresee significant growth throughout the forecast timeframe. Increasing stress levels has led to a rise in number of individuals suffering from obstructive sleep apnea. According to Sleep Advisor, an online platform providing information about sleep information and products, 25 million adults suffer from sleep apnea and the number is estimated to grow rapidly till 2050. Moreover, technology penetration is comparatively higher in the U.S. as compared to other developing economies that positively impacts the country growth. Aforementioned factors coupled with improving regulatory scenario will foster the sleep tech devices market growth in the U.S.

Few of the notable players operating in the industry are Eight Sleep, Philips, Dreem, Casper, Nokia, Sleepace, Xiaomi, Oura Health, Fitbit, Emfit and Neuron, Samsung among others. These players are implementing various strategies such as product launches, acquisitions and collaborations, in order to capture high revenue share in sleep tech devices business.

Sleep tech devices market research report includes an in-depth coverage of the industry with estimates & forecast in terms of revenue in USD from 2014 to 2025, for the following segments:

A sleep tech device is an electronic device utilized for monitoring and enhancing sleep mostly in individuals suffering sleep apnea, narcolepsy and insomnia.
The global market for sleep tech devices is set to exceed USD 25 billion by 2025, according to a new report published by Global Market Insights, Inc.
Male segment was leading the sleep tech devices industry worldwide with USD 5 billion revenue share in 2018.