Rapid Strength Concrete Market size was USD 305.9 billion in 2019 and will grow at a CAGR of 8.3% from 2020 to 2026. Rapidly rising construction activity in developing nations in Asia Pacific and Latin America will propel the demand growth during forecast timeframe.

Rapid strength concrete is a type of concrete that gains strength quickly after use. This type of concrete has strength above 3,000 psi which is attained in less than 2 hours. Rapid strength concrete is an alternative solution to other forms of concrete for renovation and preservation of fast aging infrastructure. The growing infrastructure projects in Latin America coupled with growing economies will boost the public and private investment in construction industry for the projected period of time. Additionally, growing emphasis on eco-friendly concrete also expected to drive the product market demand over projected timeframe. 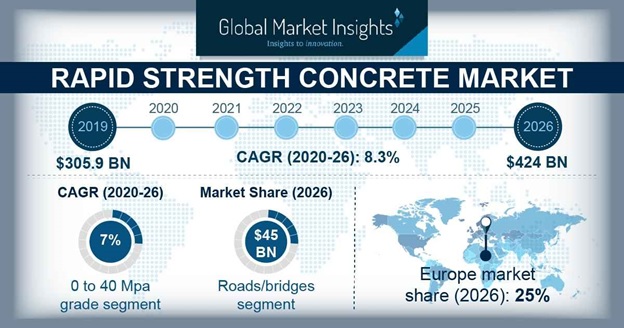 Rapid strength concrete is widely used in roadways construction around the world. Strong residential dwellings market in Asia Pacific and recovering housing market in Europe will have positive impact on the rapid strength concrete market size over the forecast timeframe. Governments in Latin America has been focusing on improving transportation infrastructure such as roads, bridges. Increasing infrastructure investment in Latin America likely to strengthen market opportunity for industry players.

Rapid strength concrete is generally used to repair structures such as roads & bridges construction, building/floors, tunnel construction, airfield construction, highway construction. Although the product achieves high strength in a short period of time (less than 20 Mpa [3000 psi] in 3 hours) the primary motive is to provide permanent solution and increase the life of structure. North America construction industry is on a rise due to increasing residential complexes and business complexes. The above-mentioned trends are likely to trigger demand for rapid strength concrete industry in the near future, signifying higher ability to capture the market in the coming years.

The rapid strength concrete used in major applications such as buildings/floors, roads/bridges, airfields, tunnels, highways, and other minor applications such as dockyards, parking lots, etc. In constructing roads/bridges, usually concrete having compressive strength more than 40 MPa and less than 80 MPa in 24 hours is used as it is comparatively more durable to withstand climate change conditions and weathering caused due to heavy vehicles. Additionally, it dries faster which is intended to remove framework which helps in making it operational in lesser time.

Housing demand is rising in emerging countries such as China, India, Malaysia, Indonesia, etc. due to increasing population and improving socio-economic conditions. Rapid strength concrete with compressive strength less than 40 Mpa finds applications such as residential buildings, floors, apartments, etc. 0 to 40 Mpa grade is a dominating segment and market is expected to grow with 7% CAGR over the forecast period.

With rapid infrastructure along with growing economies which is supported by government policies the real estate market is projected to grow rapidly in coming years. Rising purchasing power and government incentives likely to propel residential dwelling market thus driving product market over the forecast period. 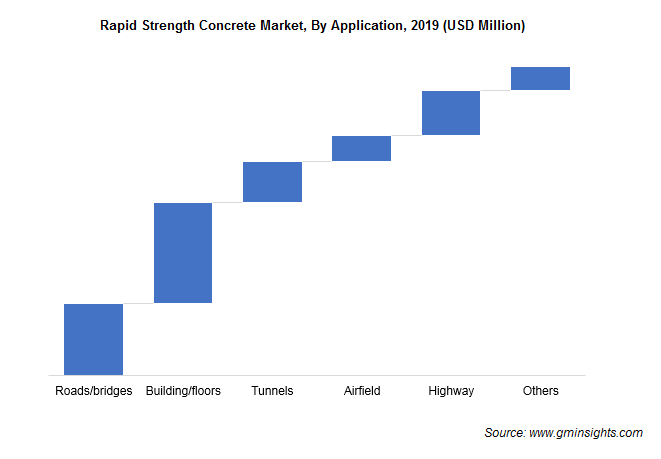 Infrastructure plays important role in country’s economic development and developed economies spend major percentage of GDP on developing infrastructure projects such as roads. For instance, in U.S. road construction usually governed and funded by federal, state and local governments. However, country is witnessing the rise in public private partnerships (PPP) that will either receive funding from government to build a road or they can generate revenue from road constructed. Therefore, due to massive spending in the U.S. and other key countries across the globe. The overall rapid strength concrete market size for roads/bridges will reach close to USD 45 billion in 2026.

The European road building market is projected to grow

Europe will account close to 25% market share by revenue in 2026. The European road building market is projected to grow strongly, which is supported by the growth in the UK, Norway and Poland, which has shown growth of about 39%, 38%, and 35% respectively in 2019 as compared with 2016. According to World Highways, the road building market is predicted to grow at 16% for the projected period of time. The recent Euro construct forecast a market uplift in the road construction. Growing road construction in region will propel rapid strength concrete demand in coming years.

Mergers & acquisitions is major strategy for the industry players

The rapid strength concrete industry research report includes in-depth coverage of the industry with estimates & forecast in terms of revenue in USD million from 2016 to 2026, for the following segments:

The market size of rapid strength concrete was exceeded USD 305.9 billion in 2019.
The industry share of rapid strength concrete is projected to grow at 8.3% CAGR during 2020 to 2026.
The overall market value for roads/bridges will reach close to USD 45 billion in 2026.
Europe is expected to account for over 25% market share by revenue in 2026.
0 to 40 Mpa grade is a dominating segment and the market is expected to grow with 7% CAGR over the forecast period.
Major players involved in the industry are Sika Corporation, Cemex S.A.B, BASF SE, CTS Cement, Tarmac, etc.