Precision Guided Munition Market size exceeded USD 25 billion in 2019 and is poised to grow at a CAGR of over 8% between 2020 and 2026. The increasing acquisition activities of precession guided munitions players across the globe are positively impacting the defense industry. 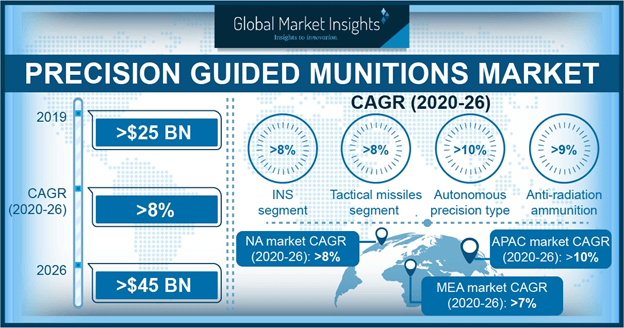 Increasing participation of regional governments to improve their precision guided munition capabilities to secure their global political position will propel the defense sector in the coming years. For instance, in March 2019, India announced the trials of its New-Generation Anti-Radiation Missiles (NGARM).

The tactical missiles segment captured the highest market share of more than 50% in 2019 and will demonstrate a growth of more than 8% through 2026. High market penetration and significant growth rate can be attributed to increasing acquisition activities and R&D investments for the development of these missiles. For instance, in February 2020, India announced its efforts to develop tactical ballistic missiles with a range of 200kms.

The missile which is being developed by Defense Research and Development Organization (DRDO), India is termed as Pranash. The configuration of Pranash has been frozen and trials will begin by end of 2021. DRDO plans to deliver fully operational missiles by end of two years. Such efforts taken by organizations are in line to promote defense manufacturing capabilities. 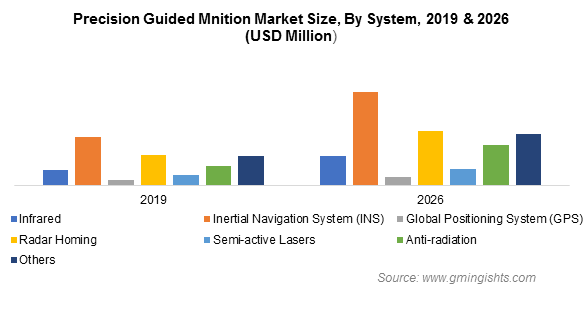 The anti-radiation ammunition segment is set to expand at over 10% during the forecast timeframe. This missile type demonstrates capabilities to seek enemy radar and target them, damaging communication networks. The precision guided munition market growth can be credited to efforts taken by various countries to develop advanced anti-radiation missiles. 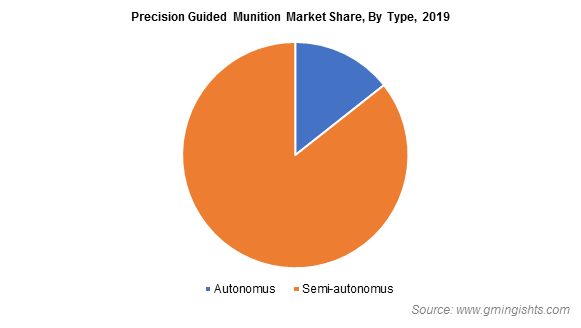 The autonomous precision guided munition market will record more than USD 3 billion and is expected to grow at around 9% CAGR through 2026 impelled by rising requirements of nations to acquire autonomous guided ammunitions.

Converting normal/dumb bombs into autonomous precision guided munitions is also one of the major market accelerators. Various countries across the globe are allocating defense budgets to modernize military munitions, stimulating the market growth. 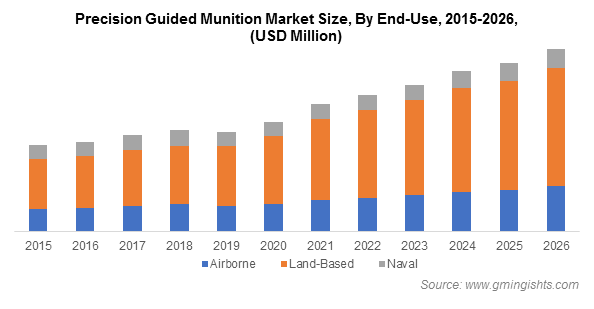 The land-based systems segment will capture a high market size of more than USD 15 billion by 2026 as increasing geopolitical insurgencies and growing border conflicts have led to the demand for high-tech ammunitions on borders.

Various nations across the regions are deploying land-based systems to improve their border protection activities. For instance, In August 2019, U.S. and Russia concluded their withdrawal from 31 years long Intermediate-range Nuclear Force Treaty. As a result, both the nations are free to deploy land based guided munitions on their borders with a range of 310 to 3,400 miles.

Asia Pacific precision guided munition market will capture the maximum revenue share of more than 25% and is predicted to register over 10% gains from 2020 to 2026 owing to efforts taken by various governments in the region toward manufacturing and research & development of guided ammunition.

The governments of countries, including India and China are providing subsidiaries on Foreign Direct Investments (FDIs) promoting the ammunition manufacturing. For instance, India allows less than 49% of FDI under foreign and government route curtaining to defense manufacturers.

Industry players to focus on new alliances and R&D

Industry players are focusing on entering strategic partnerships and joint ventures to enhance their existing product offerings and expand their market share.

Established players operating in the industry are focused on developing innovative systems with enhanced features such as extended range of missiles and enhancement in detection capabilities, supporting the market share.

The precision guided munition market research report includes in-depth coverage of the industry with estimates & forecast in terms of revenue in USD from 2015 to 2026 for the following segments:

The market size of precision guided munition exceeded USD 25 billion in 2019.
The industry share of precision guided munition is poised to grow at a CAGR of over 8% between 2020 and 2026.
Asia Pacific market will capture the maximum revenue share of more than 25% and is predicted to register over 10% gains from 2020 to 2026.
According to the analysts at GMI, the autonomous segment will register a valuation of more than USD 3 billion by 2026 due to rising requirements of various nations worldwide to acquire autonomous guided ammunitions.
The tactical missiles segment captured the highest market share of more than 50% in 2019 and will demonstrate a growth of more than 8% through 2026.
As per Global Market Insights, Inc., the anti-radiation ammunition segment is set to expand at over 10% during the forecast timeframe owing to efforts taken by various countries to develop advanced anti-radiation missiles.