Polyvinyl Butyral Market size was estimated over USD 2.3 billion in 2016 and the industry will grow by a CAGR of more than 5% up to 2025. 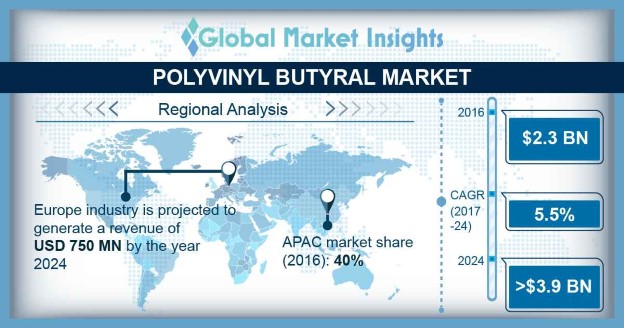 Rising automotive market in the emerging economies is the key factor behind the growth of the global polyvinyl butyral (PVB) industry in the study period. This product is widely used in making architectural and automotive laminated glass. Automotive OEM manufacturers utilize laminated glass for making sunroofs, side & back windows and windscreens. These laminated glasses are made through bonding PVB in between layers of two glass panels under extreme pressure and temperature conditions. Laminated glasses are used in an automobile for safety purposes as it offers protection against vehicle head injuries caused during accidents. In the past, windshields were not been designed to absorb higher force and speed of the air bags due to low strength of the glass material. PVB laminated glass has overcome the above disadvantage due to its higher strength compared to conventional glasses. PVB possesses key properties such as excellent durability, better edge stability and superior mechanical strength, which makes them a preferable choice for the automotive manufacturers. Furthermore, this product provides protection from infrared radiation & UV, noise reduction and provides overall safety to the vehicle. Increasing number of vehicle production along with changing consumer preference toward safety of the automobile is likely to increase polyvinyl butyral market demand in the study period.

Although, the product is gaining considerable attention in various end-user industries, the availability of substitutes is likely to hamper its demand in the study period. Ethylene vinyl acetate (EVA) is a substitute of the product which is used in making laminated glass. EVA offers a range of benefits compared to polyvinyl butyral such as low tendency to permeate water, and excellent adhesiveness. Thus, the challenges associated with product substitutions are likely to slow down the market growth in the study period.

The global polyvinyl butyral market is segmented, based on end-user industry, into building & construction, transportation, defense and others. Building & construction segment will account for an approximate share of more than 25% throughout the forecast time period. The product is used for both commercial and residential building applications. The product is used in a range of application areas including architectural glazing, acoustic protection and lamination of glass in hospitals, restaurants, resorts, museums, libraries, hotels, etc.

Transportation segment is likely to grow at significant rate in the study period due to growing polyvinyl butyral usage in producing laminated glasses for vehicle. The product improves key mechanical and optical properties of vehicles compared to conventional glass systems. Rising safety concerns for vehicles will further drive the product demand in the study period.

The major application segments in the global PVB market are lamination, coatings, acoustic protection, architectural glazing, binders and others. Laminated glass segment accounted for approximately one fifth share of the overall market in the study period. This is due to rising product demand in the building & construction and automotive industry. Laminated glass manufactured from PVB possesses key properties including good absorption of UV light, excellent sound barrier properties, better impact resistance, etc. Coating segment is likely to grow at more than 6% CAGR in the upcoming years. This is due to growing product usage in coating application for textile substrates. Polyvinyl butyral is also used in the coating applications of powdery paints, printing inks, wood paints, foil coatings, leather paints, adhesives, etc.

Asia Pacific accounted for around 40% of the share of the overall PVB market due to growth in construction and automobile industry. China reported an increase in the number of vehicle production from 18 million units in 2010 to 28 million units in 2016. Furthermore, the region has reported significant number of people migrating to urban areas in this period. For instance, Asia Pacific region reported around 45% of its population living in cities in 2013. New Zealand and Australia reported more than 85% of its population in urban areas during that year. Rapid urbanization and growth in the number of vehicles in Asia Pacific will provide huge opportunity for the industry in the upcoming years.

These companies are strategically investing to expand their production capacities to meet increasing consumer demand across the world. For example, Eastman Chemicals started new production line for its Saflex PVB in Europe in 2012.

Polyvinyl butyral resin is extensively used in applications requiring good binding, excellent optical clarity, strong adhesive properties, flexibility and high strength. The product is synthesized by using n-butyraldehyde and polyvinyl alcohol (PVA) in a condensation process. Some of the commercially available trademarks for the PVB includes Saflex, KB PVB, Butacite, GlasNovations, WINLITE, EVERLAM, S-Lec, and Trosifol. The product is employed for the manufacturing of laminated glass that are used in automotive and architectural industry applications. The product is also gaining considerable attention for coating applications. Rising demand for laminated glasses is likely to positively affect the growth of PVB market size in the future.