POS Terminals Market size exceeded USD 65 billion in 2020 and is poised to grow at over 13% CAGR between 2021 and 2027. The global industry shipments are anticipated to reach 150 million units by 2027, attributed to the increasing adoption of in-store mobile payments among customers across the globe. 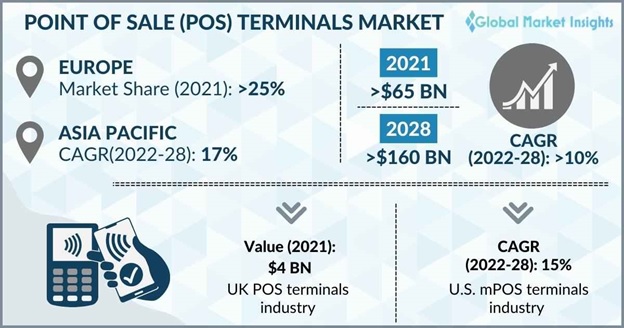 The ongoing coronavirus (COVID-19) pandemic negatively impacted the POS terminals industry in 2020. The closure of manufacturing facilities of component and raw material suppliers caused supply chain disruptions for players operating in the market. Also, increased adoption of Apple Pay and Google Pay applications led to reduced need for a payment terminal to conduct the payment transaction. According to Blackhawk Network Holdings Inc., around 88% of retailers surveyed across eight countries used digital wallets in November 2020.

The U.S. mobile POS terminals market size is predicted to register around 16% growth rate during the forecast timespan. The U.S. is witnessing a rapid shift toward EMV and chip-card for secured & safe transactions. According to EMVCo, there were over a billion EMV cards in circulation in the U.S. market in 2019. Migrating to EMV has driven the adoption of digital payment in the form of mobile wallets, wearables, and IoT applications.

EMV cards are widely used for NFC mobile payments due to their increased security and interoperability to mobile payments. With the adoption of EMV cards, the merchants in the U.S. market, witnessed 87% decrease in counterfeit fraud losses in March 2019 compared to September 2015.

In UK market, the valuation of software-based solutions was around USD 400 million in 2020, owing to the rising expansion of fast-growing casual dining brands in the region. Brands, such as Le Bistrot Pierre, Honest Burgers, Pho, and Wahaca, have expanded rapidly in the past few years. For instance, in January 2020, McDonald's Corporation announced plans to invest USD 1.22 billion to open 60 restaurants in the UK market. 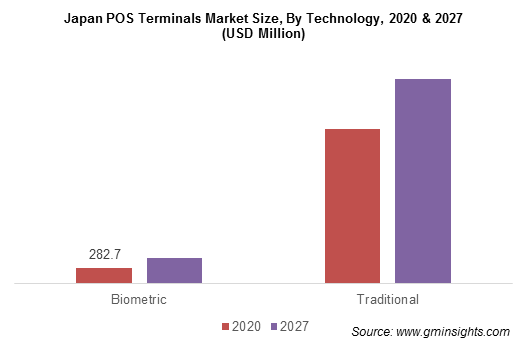 In Japan, the biometric POS terminals market will expand at 7% CAGR till 2027, due to rapid technological advancements in the payment sector. The flourishing travel & tourism industry in Japan has encouraged restaurants, hotels, and tourist shops to take advantage of biometric technology for providing convenient and safer payment transaction to tourists.

The Japanese government has already tested fingerprint payment system in 2016, under its Biometric Payment Scheme. The system was developed to allow faster hotel check-ins and make tax free shopping easier for visitors. A total of 300 restaurants, souvenir shops, hotels, and other establishments participated in the experiment to help tourists authenticate transactions with their fingerprints linked to their payment details.

The retail sector is anticipated to dominate the market share through 2027. The need for robust and centralized payment system has accelerated the adoption of multiple POS terminals among large retail chains, departmental stores, and supermarkets. These terminals enable retailers to access their stores remotely and continue payment operations in the absence of supervision.

The POS software also allows retailers to track and sort products in online and physical stores. The increased focus on improving consumer shopping experience has also driven the adoption of POS terminals among retailers. POS terminals provide retailers the ability to better manage their inventory and understand the sales performance that attracts customers. 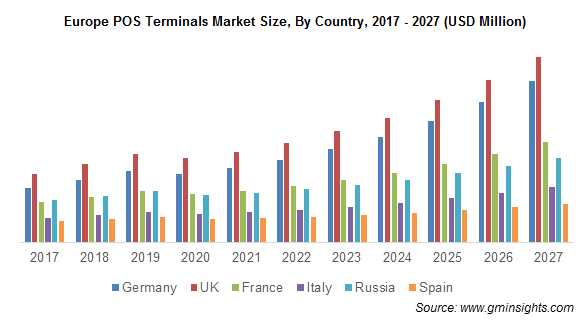 The Europe POS terminals market accounted for more than 25% revenue share in 2020. The increasing smartphone penetration coupled with growth of the e-commerce sector has driven the adoption of digital payments across Europe.

Several European countries have shifted toward cashless payments. Sweden and Denmark are the leading countries that aim to become complete cashless economies by 2023. With countries shifting toward digital payment, the trend of replacing conventional billing system with POS terminals has increased significantly across the region.

The manufacturers are developing innovative POS terminals to attract consumers and remain competitive in the market. The companies are also adopting partnership & collaboration strategies to expand their product offerings and customer base.

The POS terminals market research report includes in-depth coverage of the industry with estimates & forecast in terms of revenue in USD and shipments in units from 2017 to 2027 for the following segments:

The market size for POS terminals size exceeded USD 65 billion in 2020 and is poised to grow at over 13% CAGR between 2021 and 2027.
According to the analysts at GMI, the global POS terminal shipments are anticipated to reach 150 million units by 2027
The biometric POS terminals segment in Japan will expand at 7% CAGR till 2027, due to rapid technological advancements in the payment sector.
The U.S. mPOS terminals segment is predicted to register around 16% growth rate during the forecast timespan, says latest report by Global Market Insights Inc.
Key players operating in the market include VeriFone Holdings Inc., NCR Corporation, Ingenico Group, Diebold Nixdorf, Panasonic Corporation, Square Inc., PAX Technology, Toshiba Corporation, Micros Systems, Inc., NEC Corporation, among others.