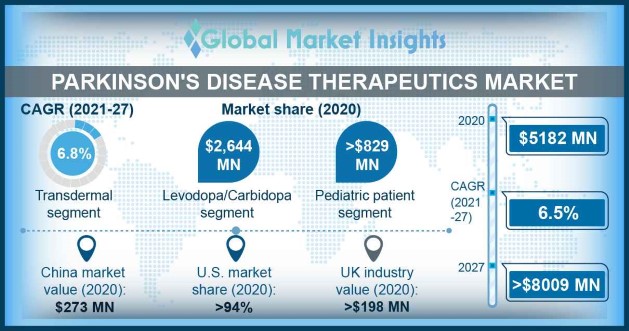 COMT inhibitors segment is predicted to witness 8.8% growth rate till 2027 led by the high efficacy of Catechol-O-methyltransferase (COMT) inhibitors in alleviating the motor symptoms of Parkinson’s disease. COMT inhibitors have proven to be beneficial adjunct to levodopa (LD) therapy as they increased the bioavailability of LD and prolong the elimination of LD in Parkinson’s disease patients. The advantages associated with COMT inhibitors are essential to augment their utilization and demand.

Oral segment in the Parkinson’s disease therapeutics market exceeded USD 3.41 billion in 2020 impelled by the factors such as pain avoidance, ease of ingestion, patient compliance and versatility to accommodate various types of drugs. Several dopamine agonists including Ropinirole and Pramipexole are administered through oral route of administration for increased clinical outcome. Thus, these factors are growing the preference for oral route of administration that will in turn propel the overall industry growth. 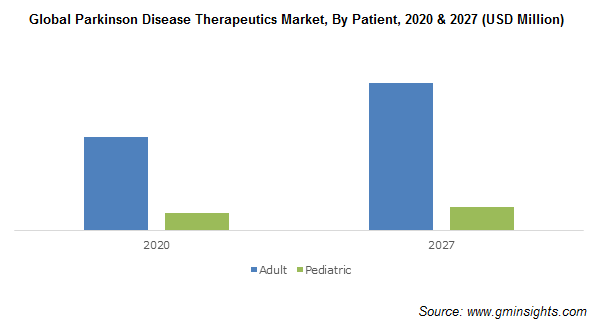 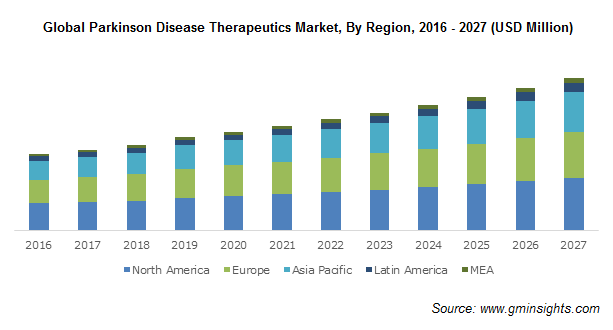 Some of the major companies operating in the Parkinson’s disease therapeutics market include Orion Corporation, Roche, AbbVie Inc., Acadia Pharmaceuticals, Amneal Pharmaceuticals, UCB, Teva Pharmaceutical among others. The market leaders are engaged in several strategic collaborations, mergers, partnerships, product launches and acquisitions in order to strengthen their industrial position. Additionally, the investments made by these participants is creating opportunities for global expansion of the market.

Parkinson’s disease therapeutics market research report includes an in-depth coverage of the industry with estimates & forecast in terms of revenue in USD from 2016 to 2027, for the following segments:

The global market for Parkinson’s disease therapeutics had reached USD 5.15 billion in 2020 and will expand at more than 6.5% CAGR up to 2027.
The market share from COMT inhibitors segment is anticipated to register about 8.8% CAGR between 2021-2027 owing to high efficacy provided to alleviate motor symptoms in Parkinson’s patients.
The industry share from the oral administration segment was more than USD 3.41 billion in 2020 and will grow due to the ease of ingestion, pain mitigation and better patient compliance.
The U.S. held more than 94% of North America Parkinson’s disease therapeutics industry in 2020 as it is the second most common neurodegenerative disease in the country.
Customize this Report
Inquiry Before Buying