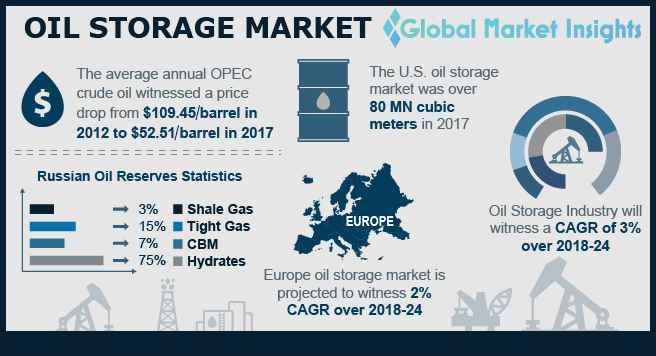 Continuous increase in the energy outlook coupled with growing concern towards the fulfillment of emergency crude oil supply will drive the global oil storage industry over the forecast period. Growing apprehension towards the protection from short term supply fluctuation of crude oil and other related products will further drive the industry demand. In addition, constant surge in production from Iran, U.S., Russia and Saudi Arabia will further drive the industry outlook. For instance, as per the EIA, the weekly U.S. field production of crude oil was 12,300 thousand barrels per day in June 2019 when compared to 8,592 thousand barrels per day in June 2014.

Rising investment toward exploration of unconventional resources on account of declining petroleum import from various countries will drive the industry dynamics. For instance, in 2019 EIA estimated that shale production across the U.S. Eagle Ford region, was calculated to edge higher by 7,000 bpd to about 1.43 million bpd, which is considered as the highest monthly output after January 2016. Similarly, shale production in 2019 was estimated to expand by almost 11,000 bpd to 1.39 million bpd across the U.S. North Dakota’s Bakken region. Growing demand for the expansion of existing refining storage facilities on account of volatile oil and gas prices will further stimulate the industry growth.

Floating roof oil storage facility will witness an expansion over 4% by 2024. Growing demand for the storage of low & medium flash point hydrocarbon related products will set to drive the industry growth over the coming years. The ability to effectively lessen the volatile organic compound and other related losses will further encourage the adoption of these units over another available alternative.

Increasing demand to store the liquified products having low flash point will boost the global spherical oil storage facility penetration. In addition, stringent government regulation to curb the environmental pollution will enhance the demand of LNG, which will further boost the industry growth. For instance, as per the U.S. Energy Information Administration, the country exported 4.7 billion cubic feet per day of LNG in May 2019 to fulfil the of Asia and Europe demand.

Commercial petroleum reserve is anticipated to witness gain of over 3% by 2024. Continuously soaring petroleum product demand on account of increasing urbanization will lead to rising oil refining capacity which in turn will uplift the industry outlook. For instance, as per the BP Stats in 2018, the global oil refining capacity increased from 88,663 thousand barrels per day to 98,139 MT thousand barrels per day in from 2007-2017.

Strategic petroleum reserve holds the leading share across global market in 2017. Government significant investments to cater emergency supplies during the emergency situation will raise product outlook over the forecast period. For instance, in 2019, the Government of India announced to develop the strategic reserve facility at Mangalore, Visakhapatnam and Padur region in line of mitigating the demand supply mismatch during energy crisis.

Based on end-use, the market is segmented into crude oil, gasoline, aviation fuel, middle distillates, LNG, and LPG. Gasoline oil storing facility is set to expand over 3% by 2024. Increasing demand for diesel and petrol in automobile and transportation industry will drive the industry growth. For instance, as per the U.S. EIA, in 2018, the country consumed around 3.40 billion barrels of motor gasoline, with an average of 9.32 million barrels per day. In addition, growing industrialization and urbanization along with the affordable price structure will further complement the industry dynamics.

Exponential surge in the demand for numerous petroleum products with rapid increase in the penetration of new refining facilities will drive the crude oil storage industry over the forecast period. For instance, as per the BP Stats, the oil consumption in APAC region has increased to 34,574 thousand barrels per day in 2017 when compared to 27,967 thousand barrels per day in 2010. In addition, growing private investments across downstream sectors will further proliferate the business outlook.

The U.S. oil storage market size is expected to surpass over 80 million cubic meters in 2017. Positive outlook toward exploration and production of shale energy coupled with the extensive investments towards the expansion of regional refining capabilities will drive the business landscape. As per the EIA, in 2017, the total dry gas produced from the shale accounted for over 60% of the U.S. dry natural gas production.

Oil storage is facilitated by public or private companies to store crude and petroleum product stockpiles to safeguard the economy and maintain national security during energy crisis. Continuous investments toward exploration and production of O&G field along with increasing rig count will stimulate the business outlook. High capital expenditure toward construction of storage facility may act as major constraint.