Neonatal Infant Care Market size was surpassed USD 2.4 billion in 2019 and is expected to register over 7% CAGR from 2020 to 2026. The growing market size is attributed to increase in number of neonatal healthcare facilities across the globe along with rise in number of premature new-borns in both the developed and developing economies.

As per the recent statistic published by a research article, around 11% of the total pregnancies result in premature or early deliveries. In the U.S. alone around 450,000 babies are born prematurely and globally over 15 million new births are early or premature. Hence, the new-born babies that need special care and attention will often need to be admitted in the neonatal healthcare facilities providing technologically advanced treatment and specialized nursing care. Currently, the amalgamation of technology with computer intelligence has extended their support to daily caretakers. Various devices including thermoregulators, monitoring devices such as ventilators, blood gas monitoring systems among others are developed with the latest technology for better clinical outcomes. 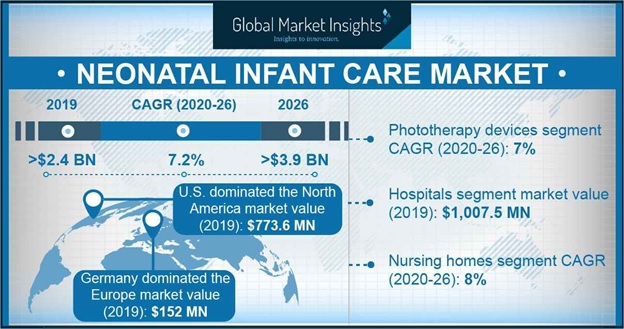 However, poor accessibility towards neonatal infant care in the lower-middle and low-income countries will be a major market impeding factor. In the rural and remote areas, the pregnant women need to travel long distance for deliveries, thereby resulting in increasing the gap for necessary and better treatment. Hence, such conditions are responsible for high mortality rate of the new-born. Moreover, poor infrastructure and poor-quality equipment are also one of the major threats to the market growth.

The ongoing pandemic of COVID-19 has somewhat impacted the neonatal infant care market. The pandemic has affected millions of people including adults, paediatric and neonates across the globe. The rapid spread of COVID-19 has resulted in several thousands of hospital admissions, thereby providing demand for medical equipment in facilities. The new-borns and paediatrics are at increased risk of COVID-19 infection as they have underdeveloped immune systems. Hence, several government organizations have established specific regulations and standards for testing as well as efficient diagnostic procedures for the new-borns and paediatric. This will result in stimulating the demand for diagnostic and monitoring equipment for neonatal care during pandemic across the globe.

Increase in number of premature births across the globe will be a prominent factor augmenting the neonatal infant care market growth. The pre-term birth complications are considered as the foremost cause of death among the children under 5 years of age. The preterm birth complications are responsible for millions of deaths across the globe every year and could be prevented with technologically advanced and cost-effective neonatal infant care interventions. The survival rates of the premature babies are quite different around the world. In the low-income economies, around half of the babies are born 2 months early and die owing to lack of cost-effective and basic care. Whereas in the high-income nations, almost all the pre-term babies survive. The optimal use of neonatal infant care technology in middle-income countries is resulting in an increased healthcare burden among preterm babies. Hence, rise in need and demand for neonatal infant care in the middle and low income countries will result in growing market share.

Thermoregulation is a critical function which is quite necessary when it comes to the sick neonates and infants. Hypothermia among the neonates increases the probability and risk of morbidity and mortality. The neonates and pediatric are more prone to poor thermoregulation owing to factors such as high metabolism rate, permeable skin, intrauterine temperature, immature vasomotor control, hypothalamus, and central nervous system, among others.

The nursing homes segment in the neonatal infant care market is anticipated to witness growth of more than 8% through 2026 led by enhanced healthcare facilities, presence of specialized healthcare professionals and increase in number of new-born admissions in the nursing homes. Neonatal nursing is defined as a subspecialty of nursing involving the care of young infants. Rise in awareness with respect to nursing homes, the specialized care they provide and advanced equipment for treatment will drive the market size.

Rising healthcare expenditure and presence of major market players in the region will boost the U.S. market revenue 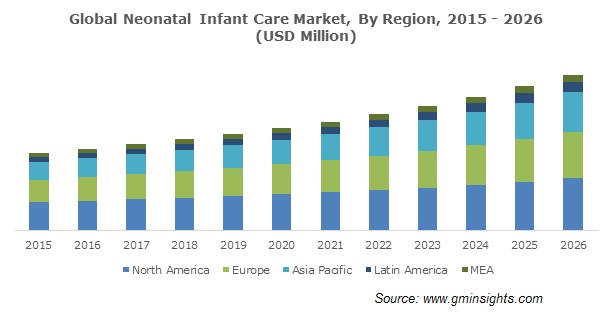 U.S. dominated the North America neonatal infant care market and was valued at USD 773.6 million in 2019. Presence of several major market players in the U.S. will be a substantial factor for the growth of the market in the region. In future, growing healthcare expenditure and increasing number of product approvals will garner considerable North American market share. Increase in number of infant mortalities in the U.S. will be one of the major driving factors as well.

Japan market size was around USD 155 million in 2019 and is projected to expand at a substantial CAGR during the forecast timeframe. Japan is considered as one of the highly favorable countries with respect to infant healthcare. As per the statistics published by the Ministry of Health, Labor, and Welfare, around 1,800 deaths were reported among the infants born before the age of one year in 2017. The neonatal death rate in the country will give rise to necessary market growth opportunities. Also, recent technological developments and high healthcare expenditure will augment the market demand in the region.

Some of the major players in the neonatal infant care industry Medtronic, Atom Medical Corporation, Fisher & Paykel Healthcare Limited, and Dragerwerk. The market is fragmented in nature with large corporations and local small players joining the industry competition.

The key industry participants are constantly involved in implementing innovative strategies and technologies to create more opportunities in the healthcare sector. The market leaders are also focusing on several strategic initiatives such as partnerships, collaborations, mergers and acquisitions, new product launches and several market development strategies in order to strengthen their business position.

The neonatal infant care market research report includes an in-depth coverage of the industry with estimates & forecast in terms of revenue in USD and in terms of volume in Units from 2015 to 2026, for the following segments:

Global market size of neonatal infant care was worth USD 2.4 billion in 2019 and may record 7% CAGR through 2026, driven by increasing premature births and rising number of neonatal healthcare facilities.
U.S. led North America market size with USD 773.6 million in 2019 and will observe appreciable expansion owing to rising healthcare spending & presence of major market players in the region.
The nursing homes segment may register 8% CAGR till 2026, powered by the presence of highly qualified healthcare professionals and rise in the number of newborn admissions in these facilities.
Japan market size was worth USD 155 million in 2019 and may exhibit appreciable growth in the years ahead, driven by extensive technological advancements in medical devices and high neonatal death rate.