Millets Market size was over USD 9 billion in 2018 and will witness more than 4.5% CAGR during the forecast timespan. 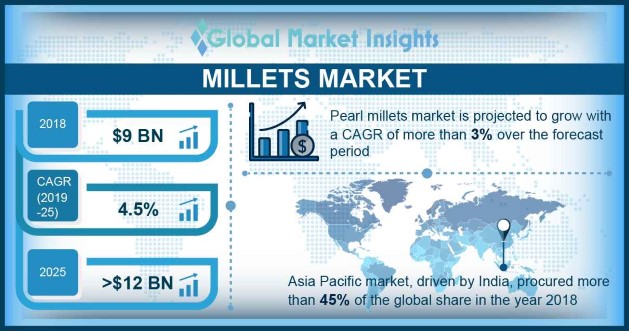 Growing inclination of urban population towards healthy food in Asia Pacific coupled with increasing unsustainable nature of rice and wheat production will drive product demand during the forecast period. The urban lifestyle choices and related food habits have given rise to number of diseases such as diabetes, obesity and cardiovascular problems such as heart attack, coronary artery disease, arrhythmias etc. Millets have high content of proteins and minerals such as calcium, iron etc. that can help in avoiding such diseases. Therefore, growing awareness amongst population regarding health benefits associated with millets consumption will boost industry growth by 2025.

As per the UN Food and Agriculture Organization’s data, agriculture accounts for 70% of total water consumption among these sectors. It is highest for Asia and Africa where agriculture is in primary sector of economy. Among agricultural crops, rice and wheat are staple food in large parts of globe. However, they are water intensive and are likely to be unsustainable, as freshwater resources are depleting around the globe. Millet grows easily in dry climate, have smaller harvesting period and require minimal water quantity. They can be a sustainable alternative to rice and wheat, as a new staple food. It can also help in providing food security to large population in the coming years.

With steadily increasing demand from urban population in Asia Pacific, mainly India and China, farmers have begun drifting towards millets cultivation over rice and wheat. High product prices in comparison with largely consumed grains are acting as a hindrance for penetration in urban food market. These high prices are owing to lower production volume and weak supply chain in millets market as compared to rice and wheat.

Pearl millets accounted for the largest share in millets markets in 2018. The product will be growing with more than 3% CAGR during the forecast duration. The increased share of pearl millet is related to the cultivation and consumption pattern of the region it is grown in. India accounts for highest millets production in terms of volume across the globe. Pearl millets has the highest share in the total millets volume grown in India. Regular millets are grown with help of fertilizers and insecticides. Various regions are adopting organic farm practices to avoid the ill effects of these chemicals. Processers and NGO’s guide farmers in organic farming techniques and process their harvest. Organic millets form an integral part of organic food products bought by consumers who prefer healthy food options. The growing section of such kind of consumer in urban areas of North America, Europe and Asia Pacific will form a lucrative segment for such organic products in the coming years.

Millets based products such as flour, flakes, cookies, etc. are more than ever increasingly visible in consumer market. The high protein content of these grains makes them ideal for vegetarian and vegan population, largely based in the U.S., Europe and Asia Pacific. Breakfast cereals such as flakes and local recipes have seen an ascending trend of adoption by African and Asian population Thus, millets based breakfast foods generated revenue over USD 2 billion in 2018 and likely to witness maximum gains due to increasing pattern of fibrous and gluten free food consumption.

Millets based infant food such as porridge are ideal for infant growth and will help to lower the occurrence of malnutrition in infants and babies. Bakery products such as packaged cookies are slowly Gaining prominence owing to its easy availability in availability throughout supermarkets and e-commerce sites, especially in Asia Pacific. Millet Beer is a traditional part of African culture and ventures related to millet beer production are also finding place in Asia Pacific, Europe and North American beverage market. In the U.S., the product is also commonly used as fodder for animals and birds. 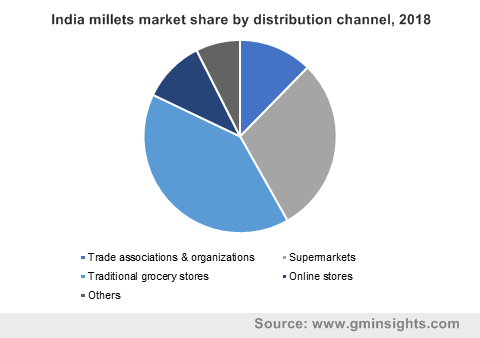 Distribution channels hold immense importance in millets market, as it provides the way for larger exposure to the common market. Middlemen are traditional part of agriculture trade associations. Processors largely tie up with farmers to directly procure crops from farmers. Farmer producer organization (FPO’s) are currently playing vital role in product procurement and distribution. Traditional grocery stores are part of open market from where consumers buy the product and its related processed foods such as bakery products, cereals, etc. Online stores or E-commerce sites are becoming a viable distribution channel for product processors and is likely to show promising above average growth more than 3% CAGR by 2025. It is one of the prominent channels for packaged millet brands and help processors create their own supply chain, where they provide services such as doorstep delivery. It also lowers their dependence on third party retailers and traditional grocery stores.

Africa and Asia Pacific are the major regions where almost all millet varieties are produced. According the FAO data, in 2017, the top five product growing countries were India, Nigeria, China, Mali and Niger. Around the globe, India has largest production volume. Nigeria, Mali and Niger are mainly Sub-Saharan countries where millets are traditionally being produced since long time. The dry climatic areas of countries in this sub part of Africa is conducive to millets production. Thus, Asia Pacific, mainly led by India, generated revenue more than USD 4.2 billion in 2018 shall exhibit substantial gains over the forecast timeframe.

India produces all varieties of product and their processed forms, which are gaining attention from country’s urban population. Nigeria is a known producer of pearl and foxtail products. The governments in these countries have also understood the importance of the product from the point of view of food security and environment sustainability. Hence, they are slowly taking steps to increase the yield and introduce product to the population through its various processed forms.

Global millets market is largely unorganized and fragmented. The products have presence of various medium sized processors. They are largely grown by small landholding farmers and farmers organizations. Millets processors such as Janadhanya Farmers Producer Company Limited and Dharani FaM CooP Ltd etc. are farmer producing organizations, which process and sell crops procured from farmers. Processors such as Treta Agro (P) Ltd and Sresta Natural Bioproducts Pvt Ltd are expanding their presence in product business by increasing number of distributors and export to North America and Europe.

Rising demand for gluten free and fibrous breakfast option is driving the segment growth. The breakfast food application share stood at USD 2 billion in 2018.
Asia Pacific industry revenue stood at USD 4.2 billion in 2018. With high production capabilities and favorable government norms in Asian economies such as China and India, APAC is estimated to register strong gains through 2025.
Online distribution channels are anticipated to witness a CAGR of 3% over 2019-2025.
Customize this Report
Inquiry Before Buying