Magnetic Sensor Market size exceeded USD 2 billion in 2018 and will grow at a CAGR of 7% from 2019 to 2025 impelled by developments in sensor technologies such as anisotropic magnetoresistance (AMR) and tunnel magnetoresistance (TMR). 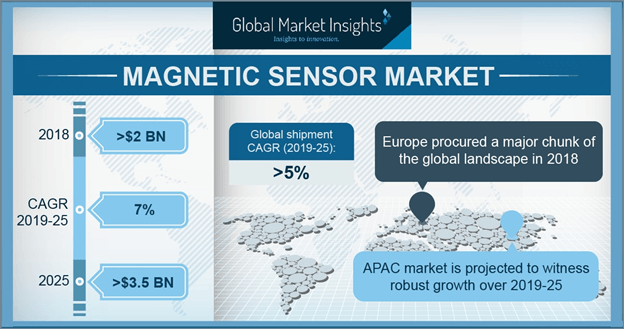 The magnetic sensors are used across several application areas including automotive, industrial, robotics, military, healthcare, and consumer electronics. These sensors provide several advantages, such as wear-free and contactless measurement of multiple mechanical quantities including angular speed and angle of rotation. Sensor technologies have undergone immense technological advancements, increasing their implementation in many electronic devices. The penetration of IoT technologies has given a considerable boost to the market revenue due to a greater number of devices implemented with navigation systems.

Hall effect sensors hold majority of magnetic sensor market share as they are used considerably in several automotive applications such as position measurement of camshaft and crankshaft, wheel speed measurement in anti-braking systems and torque detection in steering wheel among others. An important advantage of these sensors is that the output voltage signal is not dependent on the detected field which ensures they remain unaffected by environmental conditions, such as humidity, dust, and vibrations making the characteristics constant over time. In addition, their ability to operate at a wide range of temperatures makes them suitable for applications such as measuring large currents.

The tunnel-magnetoresistance (TMR) based sensors will witness significant adoption in the market. These sensors are used in applications, such as vehicle steering column, for improving the accuracy in automated parking operations. The advancements in automotive electronics are creating a demand for instantaneous processing and improved accuracy to ensure more safety. These components achieve considerably higher outputs than AMR and GMR sensors. Additionally, they provide features, such as high stability, low temperature drift, and longer life, which will increase their implementation in several applications.

Navigation systems and electric compass will be one of the major application areas in the magnetic sensor market. Navigation and tracking systems have been highly deployed in a large number of applications such as automotive, commercial, and others. The demand for highly accurate GPS navigation systems will increase the implementation of magnetic sensors in consumer electronic devices.

Automotive technologies, such as connected cars, have increased the need for navigation systems for route optimization and guidance to improve driver’s safety & comfort. Moreover, consumer electronic devices, such as smartphones, have witnessed a high implementation of magnetic sensors for navigation. Commercial applications, such as transportation companies, food delivery services, and online shopping platforms, are further adding to the growth of the market with significant use of navigation systems. 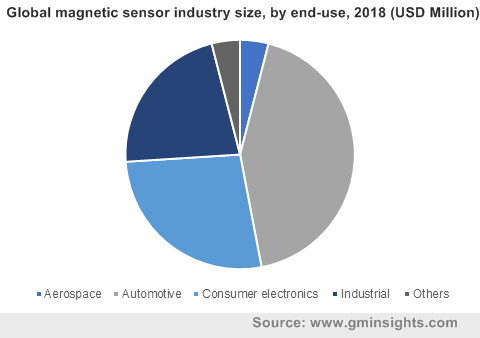 The automotive industry is the most prominent sector in the magnetic sensor market. The flourishing automotive industry globally and the increasing electronic content per car is one of the major reasons for the industry growth. According to the European Automobile Manufacturers Association, around 98.1 million motor vehicles were produced globally in 2018. The automotive manufacturers are highly inclined toward the implementation of new features and safety systems in automobiles. High competition in the industry has resulted in strong research & development in the automotive electronics sector. Magnetic sensors are used in several automotive components, such as steering mechanisms, adding to the growth of the market value. Magnetic sensors provide advantages, such as less power consumption and compact sizes, which improve vehicle efficiency. The growth of hybrid & electric vehicles and the implementation of these sensors to improve vehicle performance will further influence the industry growth in the automotive sector.

Consumer electronics is witnessing high adoption of the magnetic sensor in several products including smartphones, tablets, display panels, motion games, printers, scanners, flat panels, cameras, and gaming consoles. Several companies are offering AMR based sensors in smartphones for navigation systems which will create potential growth for AMR technology. The consumer electronics industry has been flourishing with rapid developments and reducing the prices of products such as smartphones, tablets, televisions, and others. The growth in the purchasing power of people in developing economies has created a high demand for consumer electronics products with a greater number of features, which will propel the growth of the magnetic sensor industry. 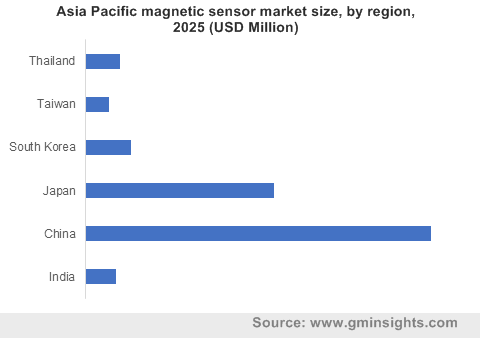 Asia Pacific is expected to be the dominant region in the market owing to the rapid growth of the automotive industry and flourishing consumer electronics industry. China is one of the largest markets for automobiles and is aiming to bring a greater number of electric vehicles in the country. The presence of a large number of automotive manufacturers will drive the demand for the magnetic sensor in the country. Moreover, China holds the presence of several sensor manufacturers, which will influence the market demand. South Korea will also grow significantly owing to the presence of a large number of consumer electronics manufacturers such as LG Electronics and Samsung Electronics.

The companies are focusing on new product developments for specific applications. For instance, Infineon Technologies in June 2018 launched TMR technology-based magnetic sensors to become the first to offer sensors based on all four technologies, Hall effect, AMR, GMR, and TMR. These sensors launched by the company offer a high level of automotive safety and can be used in steering angle applications, electric motors, and others. Strong research & development is expected to bring more advanced products.

The advanced products and systems are moving toward compact and portable sizes as well as battery-operated mechanisms requiring compact and durable sensors. The ability of magnetic sensors to be actuated by the magnetic field flux eliminated the need for physical contact, making them highly reliable in sensing applications for speed and position sensing. The growth in application areas has boosted the technological advancements and resulted in the introduction of advanced sensors such as TMR. The magnetic sensor industry has grown over the years with the deployment of navigation and sensing technologies in portable consumer electronics devices, automotive systems, and industrial applications. The introduction of application-specific and more capable sensors, such as highly sensitive, low power consumption, and compact, resulted in their implementation in a greater number of applications.

The magnetic sensor market size exceeded USD 2 billion in 2018, says this forecast report by GMI.
The Asia Pacific continent is expected to be the dominant market over the forecast period owing to rapid growth of the automotive industry and flourishing consumer electronics sector.
The automotive industry is the most prominent sector in the market driven by increasing electronic content per car.