Lubricants Market size was over 37 billion tons in 2014 with 2.9% CAGR estimation from 2015 to 2022. Rising automobile demand will stimulate market in future. Lubricant is used to reduce friction and prevent wear and tear in automotive engine components including shaft, connecting rods and piston. Rapid industrialization in developing countries will further complement the industry growth. 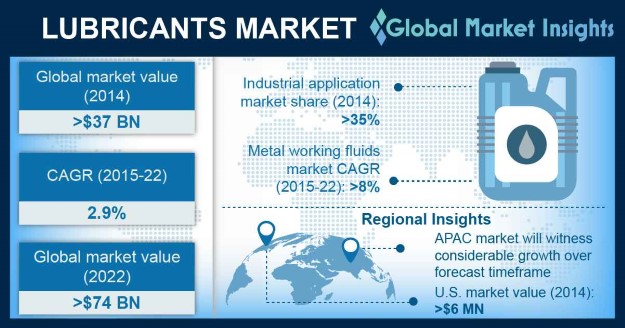 Increasing demand from manufacturing sectors including medical devices and 3D printing will drive the lubricants market size growth during forecast period. Decline in crude oil price results into low base oil prices which will positively impact business growth. Base oils prices are downstream in nature, so it is expected to improve from 2017.

Increasing environmental concerns towards aqueous toxicity of conventional products and biodegradability has increased the importance of the bio-based lubricants which will propel the lubricants market share in future. Petrochemical price fluctuation will further complement the industry growth from 2015 to 2022.

Industrial lubricants segment contributed 40% in 2014 owing to high consumption and revenue generation of general industrial oils. It has wide application in chemicals, unconventional energy and mining sector and is expected to strengthen the lubricants market demand in compressors, bearings, centrifuges, hydraulics and industrial engines in future.

Metal working fluids is expected to witness growth over 8% during forecast period. Process oil has wide application in technical and chemical industry to improve manufacturing process. Increasing chemicals demand mainly in Asia Pacific is expected to propel the lubricants market growth from 2015 to 2022.

Increasing demand for machinery maintenance from manufacturing sector to minimize the operational cost will stimulate the business growth in future. Asia Pacific is expected to witness growth during forecast period subject to increasing demand from machining, mining, plastics and metal forming industry mainly in China and India which has resulted in capability expansions. Lubricants market in India is expected to witness growth over 11%, in term of revenue during forecast timeframe owing to the strong domestic lubricant consumption demand through the automotive and manufacturing industries.

Installation of large number of power plant is expected to positively influence the lubricants market in China share in coming years. China was valued over 5 million tons in 2015. Regional manufacturers are expected to comply with the Petroleum Act, Public Liability Insurance Act, Factories Act, Stockholm Convention on Persistent Organic Pollutants.

Sluggish industrial output in Europe will propel the demand for low cost products in the region. Increasing focus on fuel economy and carbon dioxide reduction will further stimulate the Europe market in coming year. Germany contributed over 10% of regional volume share in 2015 and is expected to witness growth over 5% in term of revenue from 2015 to 2022. Increasing demand for consumer goods, capital goods and construction sector will complement the lubricants market outlook.

U.S. was over 5 million tons and is expected to witness significant growth in future owing to increasing spending in infrastructure segment. American Society of civil engineers estimated that over USD 3.5 trillion investment is required to bring America’s infrastructure into good condition by 2020.

Lubricants market players include British Petroleum, Sinopec, Idemitsu, Shell, and Total, which are integrated lubricant manufacturers ensuring raw material supply to produce additive and mineral oil. Through integration, companies get benefitted in terms of widening their operation scope and market expansion. Most of manufacturers are tied up with oil & gas companies to ensure supply of raw material. With crude oil reserve depletion, market has witness decline in raw material supply. Therefore, to stabilize the scenario, O&G companies have started emphasizing on developing new refining techniques.

Lubricants industry is dominated by Shell, Chevron, ExxonMobil and BP which collectively accounted for over 40% of the overall demand in 2014.

Lubricant is a substance used to reduce the friction between the surface when came into mutual contacts. It has antifoaming, anti-wear, and antioxidant properties and has wide application in industrial, automobile, agriculture, mining, steel and manufacturing sectors. It is also used as cutting fluids such as, oil emulsion in several industries. Oil emulsion in water is widely used as cutting fluid. These fluids are used to cool or lubricate the surface. Increasing automobile sales will positively influence the lubricants market growth during forecast period.

Lubricants Market report includes in-depth coverage of the industry with estimates & forecast in terms of volume and revenue in Million Tons and USD Million from 2012 to 2022, for the following segments:

The overall Lubricants Market is anticipated to record a CAGR of 2.9% through 2022
Lubricants Market recorded a valuation of 37 billion tons in 2015 – 2022.
Customize this Report
Inquiry Before Buying