Long Term Care Market size exceeded USD 915 billion in 2020 and is anticipated to grow at a CAGR of over 8.5% between 2021 and 2027. Growing geriatric population opting for long term care services, especially in the developed economies is expected to boost the market growth. Incorporation of novel healthcare IT modalities in these services will promote the demand for long term care. The ongoing advancements with adoption of novel technologies to proliferate the market expansion in the coming years. 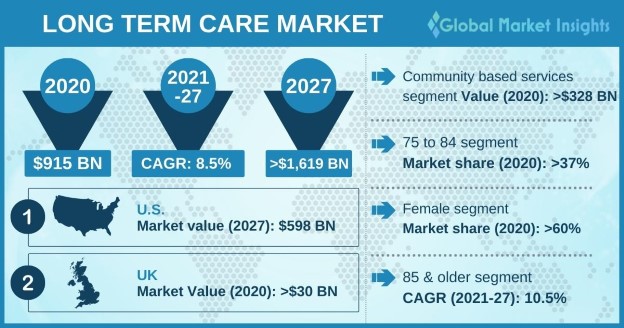 However, factors including high cost of long term care services and poor awareness in the developing economies may negatively affect the market progression. Rising geriatric population and increasing prevalence of chronic ailments along with disabilities in developing regions promotes the market potential. Although, the lack of awareness regarding LTC in these countries may hamper the industry growth. This poor awareness is mainly owing to high cost of LTC and lack of national policies by national regulatory authorities.

The COVID-19 outbreak arose as an unparalleled health crisis that has rendered negative impact on the long term care market. The coronavirus pandemic affected millions of individuals across the globe inflicting significant mortalities. The nationwide lockdowns and emergencies declared in majority of the countries distorted the supply chain. The COVID-19 pandemic also impacted the healthcare industry by imposing tremendous strain on the healthcare facilities owing to incremental patient influx.

Healthcare facilities including nursing homes were operating with minimal capacity, with massive outbreaks being reported in medical facilities. Multiple research studies reported substantial fraction of deaths due to infection emerging from nursing homes in countries including the U.S., France, Canada, Spain, and Belgium. Several clinical studies highlighted that the aging population suffering from chronic ailments, residing at nursing homes have increased risk of severe disease and death. The CDC (Centers for Disease Control and Prevention) also stated that nursing homes are possibly the more vulnerable institutions during the COVID-19 pandemic.

The residents opting for long term care are generally suffering from comorbidities such as cardiovascular, chronic respiratory, cerebrovascular disease, diabetes, and dementia among others. These factors attribute to proliferated risk of COVID-19 progression with critical outcomes. A research study conducted in the U.S. indicated that around 65.5% of the elderly care center residents were diagnosed with dementia. Approximately 46.8% with hypertension, 20.9% suffered from stroke, 14.3% with chronic obstructive pulmonary disease, and over 20% were suffering with diabetes. Majority of the participants with more than one comorbidity increases the risk of a SARS-CoV-2 infection exponentially. In order to curb the spread of infection, the nursing homes and elderly care centers among other facilities offering long term care solutions were limited to operate at lower capacity.

Rising prevalence of chronic ailments, disability, and rapidly aging population are anticipated to augment the need for long term care. The number of older adults is poised to increase by two-fold times and reach around 1.5 billion by 2050. The share of geriatric population aged 65 years & above surged from 6% in 1990 to 9% in 2019, with further projections indicating to reach 16% by 2050. Geriatric population is attributed with the high prevalence of chronic ailments including cancer, diabetes, neurological disorders, cardiovascular diseases, and others.

Moreover, the geriatric population and the high incidence of disability further increases the need for long term care. The rising prevalence of disabilities increases challenges pertaining to performing daily activities and decreases the independency. This decreased ability to perform daily functions is set to facilitate the demand for LTC, thereby driving the industry expansion during the forecast timeframe.

The 75 to 84 segment captured 37% of the long term care market share in 2020 led by the rapidly aging population base and the high incidence of disabling conditions among the elderly population.

The female segment dominated more than 60% of revenue share in 2020 impelled by the growing prevalence of chronic conditions such as hypertension, breast cancer, diabetes, and other diseases among women. By the end of 2020, approximately 7.8 million women were suffering due to breast cancer in the past 5 years, making it the most prevalent cancer in the world. Breast cancer is responsible for impacting the highest number of disability-adjusted life years (DALYs) among women than other cancers. Thus, the soaring prevalence of cancer and significant loss of disability-adjusted life years (DALYs) to promote the need for long term care among women. 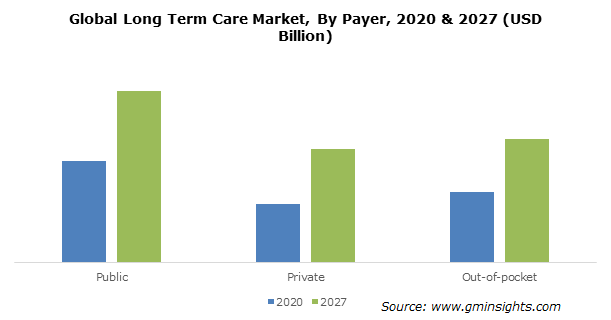 The public segment size was USD 403 billion in 2020 propelled by the rising public funding and adoption of favourable policies by the authorities for long term care services. According to the OECD, the combined public health and long-term care expenditure accounted for around 6% in 2006-10 and is projected to reach 9.5% in 2060. Mandatory public long term care insurance systems exist in countries such as Republic of Korea, Germany, Japan, Luxembourg, and the Netherlands. Moreover, increasing awareness regarding elderly care services and usage of supportive legislation in emerging economies is set to benefit the industry revenue. 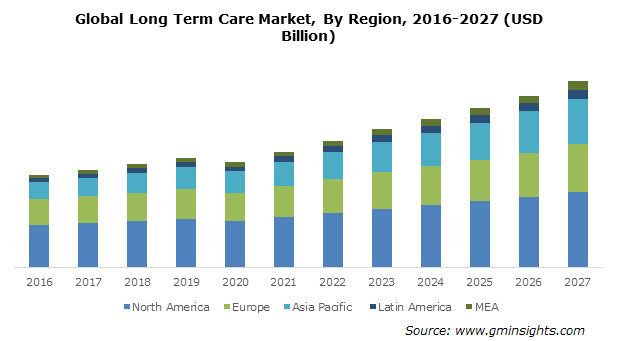 U.S. long term care market will reach USD 598 billion by 2027. This significant growth is attributed to several factors such as substantial target population, high expenditure on healthcare & LTC, and rise in incidence of chronic ailments across the country. According to the American Action Forum, by 2030, approximately 24 million Americans are estimated to require LTC, indicating two-fold increase as compared to current demand. The amount and complexity of care for every individual is also set to increase with soaring number of chronic conditions. Furthermore, projections suggest that by 2030, the LTC costs are expected to more than double and may reach USD 2.5 trillion. Presence of public health reimbursement services provided by Medicare and Medicaid services is predicted to drive the industry progression. Medicaid and Medicare services provides funding to community-based organizations, elder care centers, and nursing homes.

Some of the major companies operating in the market are Extendicare, Brookdale Senior Living Solutions, Capital Senior Living, Sunrise Senior Living, Diversicare (DAC Acquisition), Home Instead (Honor), Amedisys, Lincare Holdings, and Atria Senior Living. These prominent leaders focus on implementation of strategic initiatives such as partnerships, mergers & acquisitions, and market diversification for business expansion. In addition, these companies are heavily investing in research that enables them to launch advanced services and garner maximum revenue in the market.

Long term care market research report includes an in-depth coverage of the industry with estimates & forecast in terms of revenue in USD from 2016 to 2027, for the following segments:

Industry size of long-term care had crossed USD 915 billion in 2020 and will witness growth at a rate of more than 8.5% up to 2027 due to the booming geriatric population and higher incorporation of novel healthcare IT modalities in these services.
Community-based services that held a market valuation of over USD 328 billion in 2020, are one of the fast-growing sectors of long-term care as they offer increased affordability and higher public spending for the community-based services.
The public payer segment crossed USD 403 billion in 2020 and will expand with the growing public funding and higher adoption of favorable policies.
U.S. market is set to record more than USD 598 billion through 2027 due to the thriving target population, rising expenditure on healthcare & LTC, and the growing incidences of chronic ailments across the country.
Customize this Report
Inquiry Before Buying