Hydrogen Generation Market size exceeded USD 140 billion in 2019 and is anticipated to grow at CAGR of over 6.25% between 2020 and 2026. Increasing crude oil consumption along with surging investments toward the expansion of existing refining facilities in developing economies will create significant market growth opportunities for various hydrogen manufacturers across the globe. 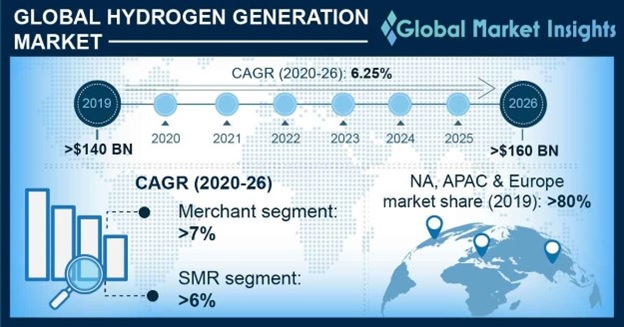 The production cost, safety concerns, slow infrastructure development and existing regulations limiting hydrogen adoption are some of the major concerns associated with the utilization of hydrogen generation. Introduction of various policies aiming toward clean fuel acceptance coupled with rising investments across the refining sector is poised to stimulate the industry growth. Introduction of regulation of various incentive programs with an aim to limit the amount of sulfur content in diesel fuel, gasoline and motor oil will further spur the market expansion during the forecast timeframe.

The global economy has been hit hard with the outbreak of the novel coronavirus, also known as COVID-19. The virus was first acknowledged in China’s Hubei province in December 2019 and since then it has become a global health threat. According to the World Health Organization (WHO), COVID-19 has impacted more than 150 countries and has led adversely impacted economies to enforce lockdowns, thereby limiting the industry expansion.
However, extended support from the government to address both short term & long term production challenges faced by the companies will positively impact the overall business landscape.

Merchant segment is projected to witness 7% growth rate through 2026. Stringent norms to curb emissions from the refining sector has led to adoption of various clean energy sources including hydrogen. Policies supporting the use of merchant hydrogen in new applications comprising pharmaceuticals along with their generation from new sources is predicted to develop the overall industrial & environmental framework. Increasing investments in low-risk hydrogen technology projects, equipped with the ability to supply H? at competitive prices will incentivize the private sector and drive innovation based on market needs & competition.

Incapacity of the medium size industries to afford the high capital expenditure owing to storage & distribution of hydrogen is expected to enhance the market demand. Changing demographics, growing population coupled with improved standard of living across the emerging nations are some of the vital factors positively impacting the industry statistics. Harmonizing various air pollution standards and lowering the regulatory barriers in areas including hydrogen purity & pipeline specifications will facilitate hydrogen trade, thereby augmenting the industry progression. In addition, development of cross sectoral roadmaps along with large scale deployment of hydrogen refueling stations & developing targets for FCEVs will boost the market value.

SMR segment in the hydrogen generation market is estimated to attain a CAGR of 6% till 2026. Abundant availability of traditional fuels leading to reduced operational costs combined with improvement in economic & operational benefits will accelerate the demand for SMR. Majority of the hydrogen production facilities including central oil plants and gas refineries use the reforming technology. Greater focus on funding programs with the aim to tap the regional product demand will create enhanced opportunities for hydrogen generation.

Favourable regulatory initiatives to reduce the fossil fuel consumption across the industries will create more opportunities for clean energy manufacturers. Furthermore, acceptance of various desulfurization & upgradation units in accordance with the changing reforms will support adapt to the increasing demand.

Others segment includes glass, agriculture, pharmaceuticals, semiconductors and transport. It holds a vast potential in the coming years attributed to upcoming opportunities in buildings, power industry and the transport sector. Utilization of hydrogen beyond the traditional existing industrial applications will stimulate the market revenue. Industries comprising aviation along with shipping have limited options in terms of low carbon fuel and thus hydrogen can support in addressing the environmental targets. Although, hydrogen-based fuels have higher energy consumption along with higher costs but policy changes to achieve low carbon targets is set to substantially support the industry demand.

Growing demand for hydrogen-based fuels in power generation combined with its utility in commercial buildings will impel the business growth. For instance, as per the IEA, in 2030, nearly 4 metric tonnes of blended hydrogen will be potentially utilized for heating buildings. Infrastructural upgrades and enhanced safety measures is projected to further boost the direct use of hydrogen in boilers which will foster the commercial hydrogen demand across various applications.

APAC to take over the regional share due to economic development

North America, Asia Pacific and Europe jointly account for more than 80% of the hydrogen generation market share by 2026. High population density, presence of numerous manufacturing facilities along with substantial investments toward fuel cell development has made APAC one of the major stakeholders across the globe. The positive outlook toward the refining sector along with the government focus on the development of new industrial facilities including chemical, automotive and power among others will foster the demand for hydrogen generation across the region.

The market statistics for hydrogen generation in Asia Pacific is slated to showcase substantial growth led by the rising energy demands. Growing refinery operations in countries including China and India is estimated to spur the industry value. According to IEA 2019, Japan and China are the largest LNG importers with the highest potential for hydrogen development. Ongoing pilot projects including the supply of hydrogen from natural gas for power plant use in Japan will further support the hydrogen trade in the country. The manufacturers operating across the region are concentrating on international hydrogen trade to achieve the low carbon hydrogen economy.

Hydrogen generation market research report includes in-depth coverage of the industry with estimates & forecast in terms of “USD” from 2015 to 2026, for the following segments: