Hydraulic Fracturing Market size was worth over USD 24 billion in 2015 and is anticipated to expand over 12% by 2024.

Growing energy demand spurred by ongoing expansion of industrial and commercial sector will drive the hydraulic fracturing market growth. As per International Energy Agency (IEA), the global oil demand is on rising trajectory with China and India contributing the maximum share. Rapid development of unconventional O&G resources including shale gas, coal bed methane and tight oil will augment the industry landscape. For instance, as of 2017, China was the third largest shale gas producer after the U.S. and Canada.

Declining production from existing conventional wells along with growing number of mature fields will accelerate the market growth. Introduction of foreign direct investment provisions along with several financial aids and tax incentives across the U.S and China will enhance the industry outlook. However, stringent environment policies pertaining to the adverse effects on environment and geology along with problems with excessive water consumption and contamination will impact the business growth.

The hydraulic fracking industry by plug and perforation technology will gain over 12% by 2024. The technique involves pumping down a bridge plug on wireline with perforating guns and are widely used for conventional fields and wells with cemented liners. Easy accessibility across the horizontal wells along with wide adoption for cased hole wells will enhance the industry outlook.

Growing demand from open hole well application is set to drive the revenue growth of sliding sleeves. The technology is used to control or shut off the flow from the reservoir zones using or producing too much water. Furthermore, lower cost and time taken during the fracking when compared with other alternating technologies will enhance the industry outlook.

The horizontal hydraulic fracturing is predicted to grow on account of wide applicability in extraction of unconventional hydrocarbon resources along with growing number of shale development projects across the U.S. As per EIA, in 2016, the horizontal hydraulic fractured wells estimated around 69% of the oil and gas wells drilled in the U.S. High productivity when compared with vertically drilled wells coupled with potential to access surrounding natural gas will augment the industry landscape.

The vertical hydraulic fracturing market share is anticipated to witness a moderate growth during the forecast period. The fracturing is mostly used for simulation purposes, to enhance the output and efficiency of the wells. In addition, requirement of low volume and pressure when compared with horizontal fracking will favor the product adoption.

The crude oil fracking is anticipated to witness moderate growth owing to volatile oil prices along with high operating and capital cost. However, declining production rate of exiting reservoirs along with growing number of mature fields primarily across the Europe including Romania and Russia will complement the industry landscape. The oil and gas operators are exploring unconventional resources to meet the growing energy demand and boost domestic product that will further boost the technology adoption.

The shale gas hydraulic fracturing market is predicted to grow over 14 % up to 2024. Ongoing adoption of clean energy sources along with growing carbon emissions has increased the demand for natural gas as a primary fuel. Surging requirement across the utilities, commercial and residential applications along with high fuel efficiency will enhance the industry outlook. 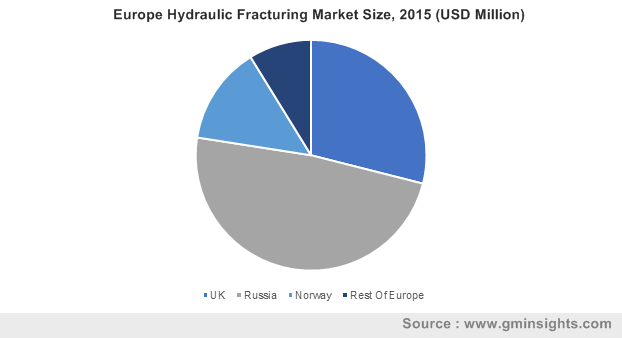 The U.S. market is predicted to grow on account of rapid shale development along with ongoing discoveries of new oil & gas fields. Extensive technical capabilities along with robust investments toward R&D by leading OFS companies including Schlumberger, Halliburton and others will augment the business landscape. As per the Energy Information Administration, in 2017, the U.S. holds over 308 trillion cubic feet of proven shale gas resources. Increased domestic production and export capacity along with reduced dependency on Russian gas supplies have further encouraged the adoption of fracking technology.

The European market was valued over USD 3.5 billion in 2015. Ongoing government measures to boost the domestic production along with need to maintain the supply security will foster the business growth. Growing adoption of well stimulation technologies along with increasing need to boost production from existing wells will complement the business landscape. However, stringent environment regulations pertaining the magnitude of environment impact caused by fracking will impact the industry growth.

Ongoing industry consolidations and investments in research and development are the key growth strategies adopted by the industry players in order to remain competitive. However, large capital requirement and volatile oil prices possess challenge for the companies.

Hydraulic fracturing is a well stimulation technique used to create fractures in the rock formations allowing the flow of hydrocarbon to the surface. The fractures are formed by pumping large amount of liquid at high pressure including proppants like, ceramic pallets, sand, water and chemical additives which expand fractures within rock formation. The risk and potential hazards associated with the technology including noise and air pollution, earthquake, water overuse and contamination, fracking is banned in several nations.