HVDC Converters Market size exceeded USD 6 billion in 2018 with annual capacity installation is set to exceed 45 GW by 2025. Global market is set to grow on account of stringent energy efficiency norms favored by rapid integration of renewable power generation technologies into the grid. 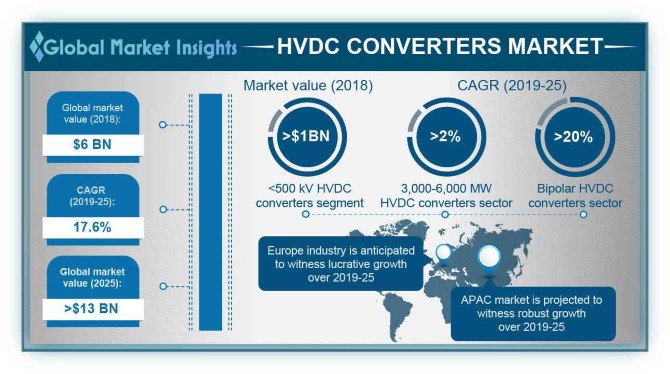 Ongoing technological progression with an aim to curb the electrical losses across the electricity supply network will positively influence the business landscape. Furthermore, revamping and modernization of the aging electric infrastructure across developed economies will further complement the industry outlook.

Favorable government initiatives pertaining to the development of cross border & intra-regional electrical networks interconnection will stimulate the HVDC converters market outlook. For instance, in 2015, the European Commission has set target to achieve a minimum interconnection of 15% of the generation capacity by 2030. In addition, ongoing efforts to minimize T&D losses by upgrading the conventional transmission infrastructure and regulatory measures to achieve energy efficiency targets will propel the HVDC converters industry growth.

<500 kV segment of the HVDC converters market surpassed USD 1 billion in 2018. Growing interconnection of power grids along with increasing government support toward installation and integration of renewable power plants will accelerate the product demand. For instance, in November 2017, the governments of France and Ireland announced to invest over USD 1 billion in the development of an HVDC interconnection link. Furthermore, growing incompetency of grid to maintain standard frequency and voltage levels will complement the product demand.

Growing demand for bulk power transmission over long distances owing to development and grid integration of large-scale renewable power plants will stimulate the >1,000 kV based HVDC converters market trends. For instance, in 2018, State Grid Corporation of China (SGCC), began the construction of an 1,100 kV HVDC transmission line with a length of over 3,000 km. Moreover, ability to curb the carbon emissions on account of higher energy efficiency will enhance the product adoption.

3,000-6,000 MW HVDC converters industry is set to witness growth over 2% through 2025. Ongoing expansion of power generation facilities along with proliferating electricity demand are the key factors positive influencing the product deployment. For instance, in 2017, in India, construction of a 6,000 MW HVDC line was started with an aim to carry power from hydro-rich North Eastern states to the central part of the country.

Bipolar HVDC converters market is predicted to register more than 20% CAGR through 2025. Ability to efficiently convey large amount of electrical power coupled with favorable government initiatives toward sustainable development will stimulate the product demand. Moreover, reliable operation and higher efficiency along with its ability to operate as a monopolar link in case of fault on one line are some of the key features that will further propel the product deployment.

Growing incompetency of electrical grid to maintain standard frequency in conjunction with rising penetration of intermittent renewable energy sources in the energy mix will significantly propel the market statistics. Furthermore, effective frequency regulation, enhanced stability of system, maintenance of optimum power flow and higher active power are some of the key factors stimulating the industry growth.

VSC based HVDC converters market is set to witness appreciable growth on account of increasing demand for offshore and underground transmission networks. In 2017, as per World Wind Energy Association, global installed offshore wind capacity surpassed 18 GW, witnessing a growth of over 50% from 2015. In addition, the ability to operate as a large synchronous machine, allowing the operator to regulate the flow of active and reactive power, will positively influence the product deployment.

Notable industry players across the HVDC converters market include Siemens, ABB, Toshiba, Mitsubishi Electric, C-EPRI and General Electric among others. Large scale investments in R&D to develop efficient and reliable converter systems coupled compliance with international technical standards have been the prime strategic assets for an industry participant to attain a competitive position.

An HVDC converter is an electronic device that converts High Voltage Alternating Current (HVAC) to High Voltage Direct Current (HVDC) and vice versa. A complete HVDC system includes minimum one converter operating as a rectifier (converts AC to DC) and one operating as an inverter (converts DC to AC). These systems are increasingly being installed by regulators for transmitting bulk current over long distance.

HVDC converters market research report includes in-depth coverage of the industry with estimates & forecast in terms of MW, and USD from 2014 to 2025, for the following segments:

hvdc converters market is forecast to exhibit a crcr of 17.6% through 2025.
The hvdc converters market is expected to witness a remuneration of $13 Billion in 2025.
Introduction of strict energy efficiency regulations and the rapid integration of clean energy technologies throughout the grid is creating a favorable business scenario for HVDC converters.
Introduction of several government initiatives across the world to promote the development intra-regional and cross-border electrical networks would push adoption of HVDC converters further.
Owing to the rollout of numerous regulatory measures to boost cross-border cooperation within the field of regional electrical power, Europe is anticipated to record substantial revenue growth.
Customize this Report
Inquiry Before Buying