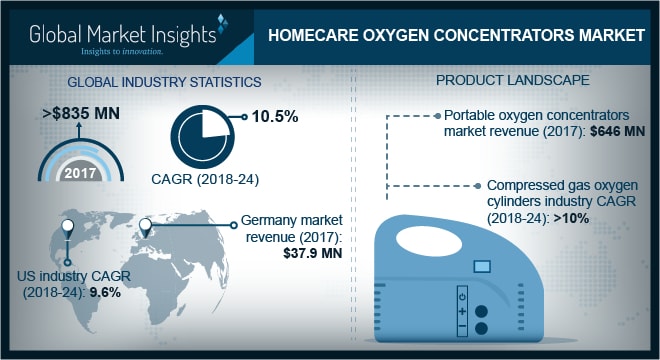 Increasing prevalence of chronic respiratory disorders such as bronchitis, asthma and COPD have influenced the homecare oxygen concentrators market growth significantly. In 2015, in U.S., there were around 3.17 million deaths due to COPD. It is the fourth leading cause of death in the United States and thus, has increased the demand for home oxygen therapies. Furthermore, development of certain healthcare policies by health insurance companies in the U.S. such as Medicare and Medicaid have resolved the affordability issues faced by the geriatric population that is more susceptible to respiratory infections propelling the homecare oxygen concentrators market growth. Also, increased preference of homecare oxygen concentrators by American geriatric population while travelling will drive the industry growth during the forecast period.

Increasing rates of respiratory infections due to nicotine addictions and other reasons such as dust allergies is augmenting industry expansion. Moreover, increasing healthcare expenditures in developed countries such as Germany and U.S. have enabled developments in oxygen concentrators. However, stringent government regulations on home therapy for oxygen concentrators is most likely to restrict industry growth.

In January 2018, Philips developed light weight Everflo oxygen concentrator which is preferred mostly by the geriatric population at home for long terms oxygen therapy. Developing such oxygen concentrators integrated with advanced technology will enhance the product portfolio and render revenue for the company.

Growing geriatric population suffering from chronic diseases such as diabetes, cancer, COPD and other respiratory infections have impelled the industry growth globally. In addition to this, continuous requirement of long term home oxygen therapy to reduce the stress levels in individuals suffering from stress related disorders such as high blood pressure and other minor cardiac ailments have driven the market growth considerably. Moreover, major industry players that are involved in manufacturing of oxygen concentrators have maintained the quality of oxygen concentrators for home use. The overall market is oligopolistic in nature with a few dominant players dominating the market and supplying superior quality home oxygen concentrators that have driven the industry growth.