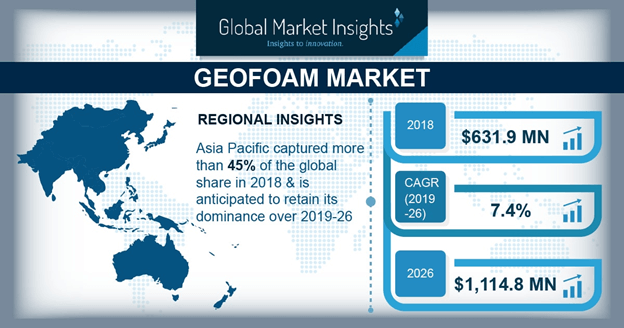 Geofoam is a block or planer rigid cellular foam polymer used mainly in geotechnical applications as a void fill and support material. These blocks or planes either made of expanded polystyrene (EPS) or extruded polystyrene (XPS). These blocks or planes are extremely light and can be manufactured in different shapes and sizes according to application requirement. EPS geofoam blocks for civil engineering application typically have dimensions 0.5 x 1.0 x 2.5–3.0 meters. These blocks can be manufactured of with varying compressive strength and density. However, extruded polystyrene geofoams are available in market only in board format due to its production process. The product has long been used in construction of roadways. They were first used in Norway in 1972 as a lightweight fill material. Since then their application in roadways and railways construction has grown exponentially.

Geofoam is 100 times lighter than traditional fill materials and they possess superior compressive strength respective to their weight. Owing to these properties, they have been adopted in many civil engineering applications such as void fill, embankments, retaining structures, etc. As geofoams are 98% air and they have closed cell structure, they provide excellent insulation properties. Owing to their ability of retaining R value for long period of time and high durability, they are choice material for insulation applications such as pavement insulation, flooring, in driveway, under-slab or in any other application where insulation is required.  The major use of product has been lightweight fill material for roadways, railways and building and construction application. There has been extensive R&D on products which has led to new avenues for applications. For instance, effect of seismic activity on geofoam has rendered it a useful material for usage as a seismic buffer for buried structures and rigid retaining walls. This application has extensively studied in Japan and U.S. and created new opportunities for the product. However, product is highly susceptible to petrochemicals and fire hazards. This could play hindrance to the overall market.

EPS is likely to dominate the geofoam market in coming years

Expanded polystyrene (EPS) geofoams held the largest market in 2018 and exhibiting strong growth rate, over 6% compound growth. Owing to economic power shift from west to east and rise in urbanization in Asia Pacific likely to have very positive impact on product demand in the region. Extruded Polystyrene is also witnessing modest growth owing to rising insulation application in transport and building & construction sector. 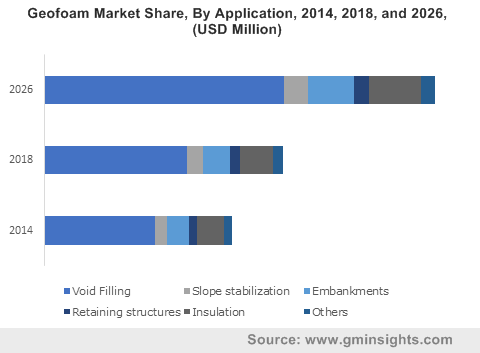 Void fill held over half of the geofoam industry by volume share in 2018. Improving conditions for European construction industry shall increase product application in building & construction sector. The factors such as good economic conditions, a favorable interest rate environment and rising infrastructure spending in the region. For instance, Spain ramped up infrastructure spending in 2019 totaling at USD 11.01 billion. Furthermore, recently, EU government and MEPs have agreed to spend considerably on transport infrastructure.

Embankments shall witness significant growth owing to rapid growth of roadways and railways projects around the world. As economic conditions are improving, the developing nations around the world are spending heavily on infrastructure improvement. This market trend is likely to be the same in developed economies due to adaption of green infrastructure. EPS used in manufacturing of product can be recycled and usually contain significant portion of recycled materials. 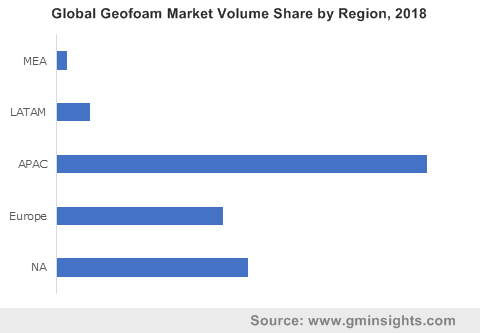 Asia Pacific held the over 45% market share in 2018 and likely to remain a key market. Economies in the Asia Pacific has significantly invested in transport infrastructure projects to support the economic growth along with international trade. For instance, China’s ambitious plan of connecting Europe, Middle East, Africa and Asia by building a web of transport infrastructure with One belt One road innovative also called as new silk road. Moreover, India is taking new initiatives to connect multiple economies corridors within the countries along with different rural parts of country.

The geofoam market size is likely to be further driven by growing economies in Latin America and rising economies in the region. Rising prosperity in the region shall also increase the market demand for transportation infrastructure. For instance, the 2014-2018 Mexico National Infrastructure Plan includes 743 projects. This included telecommunications, energy, transportation, housing, health, tourism and urban development. This infrastructure spending almost reached USD 600 billion.

Rising intercontinental trade activity shall boost the demand of better transport infrastructure around the world. For instance, the EU and Japan's Economic Partnership Agreement came into effect in February 2019. They have also agreed to build infrastructure in multiple sectors including transportation. The infrastructure building is funded by USD 66.26 billion EU guarantee fund. This shall create new market opportunities for product in near future.

A total of 200,000 km national highways planned by Indian government

Product innovation is a key to growth

The valuation of geofoam market in the year 2018 was USD 630 million.
The overall geofoam market is anticipated to record a crcr of 7.4% through 2026
Geofoam is a block or planer rigid cellular foam polymer used mainly in geotechnical applications as a void fill and support material.
Report estimates expanded polystyrene (EPS) geofoams held the largest market share in 2018 and are exhibiting strong growth rate of over 6% up to 2026.
Asia Pacific held over 45% market share in 2018 and is likely to remain a key market, as per GMI report.
According to this report, geofoam market was over USD 630 million in 2018 and is likely to record growth at a CAGR of about 7.4% from 2019 to 2026.