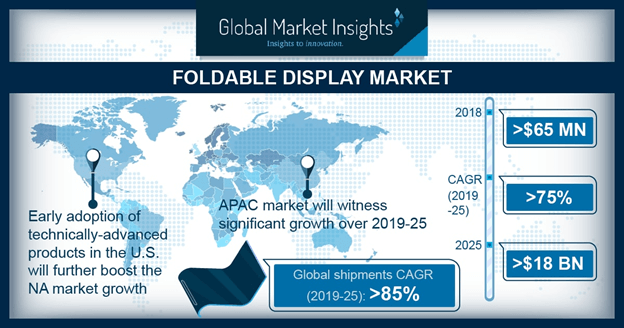 Rapid transformations and changing display technology in upcoming smartphones are creating several opportunities for the foldable display market growth. The demand for such products is attributed to increased customer awareness about the latest technologies in large economies and manufacturers’ strategies of providing innovative offerings. Several smartphone and tablet manufacturers across the globe are working on the market offerings by integrating them into the newly developed products. For instance, in October 2018, Royole Corporation announced the launch of its new smartphone plus tablet offering, FLexPai, with a display supporting both folded and unfolded usability. The new product addresses several applications including office, gaming, and entertainment.

Technological advancements in OLED display technology is one of the major drivers for the foldable display market. The benefits of OLED technology in integration with foldable displays & screens are gaining high popularity among electronic device manufacturers due to the flexibility, better picture quality, and efficient lighting benefits. The utilization of OLEDs in smartphones provides thinner, lighter, and highly durable features compared to the conventional screens.

The foldable display market growth is hindered mainly due to high-cost factors associated with the technology. Due to high cost, device manufacturers are unable to deploy them in the new products owing to less customer buying capacity. Commercialization of technology globally over the forecast timespan can overcome such challenges. Moreover, the hardware & software incompatibility issues and technical defects occurring in the existing offerings are also hindering the market development. Enhancement in the manufacturing capabilities and better integration of the hardware & software components by manufacturers will eliminate the compatibility issues.

Smartphones and tablets are expected to gain high traction over the forecast timespan in the foldable display market due to increasing technological innovation and deployment activities by the leading smartphone manufacturers globally. Device producers, such as Samsung, LG, and Huawei, are working to successfully integrate this technology into their new phones, which is a major factor accounting for the foldable display market expansion. Several phones are expected to launch in 2019 including Samsung Galaxy X, Motorola Razr, LG folding smartphone, Apple foldable iPhone, and Huawei folding phone. Owing to the high investments and rapid technical developments, the folding phones are expected to gain commercialization in the coming years. For instance, in November 2018, Huawei announced that it is working on the development and launch of its first foldable phone with 5G capabilities. All these factors along with the picture quality & innovative benefits of the emerging technology are creating the foldable market growth prospects.

In the foldable display market, notebooks are predicted to witness exponential growth owing to the product development plans adopted by few manufacturers such as Samsung and Lenovo. Compared to the smartphone industry, notebooks and laptops are growing at a slow pace and are expected to gain high speed after the foldable smartphone commercialization. Folding notebooks will provide several typing and convenience benefits compared to the traditional laptops in the market. In October 2018, Samsung announced its plan to launch a laptop integrated with this technology.

The Asia Pacific foldable display market is witnessing rapid expansion compared to the other markets owing to the continuous launching plans and technical activities carried out by the Asian manufacturers such as Huawei, Samsung, and others. Also, the presence of several leading display manufacturers in the Asian countries is creating several market expansion opportunities. Additionally, the launch of the first smartphone, FlexPai, by Royole Corporation is also a key factor that adds up to the industry expansion in the Asia Pacific region. The penetration of manufacturing companies in this region is attributed to the low operational costs and easy & cheap availability of raw material & components required to develop the industry products.

North America is expected to witness a high growth in the foldable display market due to the early adoption of all digitized and technically-advanced products in the U.S. High disposable income & spending capacity of the American citizens to consume costly electronic devices is also a reason for the industry expansion prospects. Moreover, the technology development initiatives by the U.S.-based companies including Apple and Microsoft is a major driver for the market.

The foldable display market comprises several component suppliers and product developers including the key players such as Samsung, LG Display, Royole Corporation, BOE, Semiconductor Energy Laboratory, and Tianma. Prominent companies are working on developing new smartphones & laptops integrated with this technology and are competing in the run to launch their products earlier than their competitors. This is due to the presence of only a few companies and chances of becoming the industry leader. Manufacturers are heavily investing in R&D capabilities related to the technology to gain a competitive edge globally. Additionally, device producers are collaborating with the display component providers to develop technically-equipped smartphones & laptops.

Smartphones and display manufacturers including LG Display, Samsung, and BOE are innovating flexible OLEDs to develop efficient products, supporting the foldable display market growth. For instance, in December 2018, BOE announced its plan to launch a new fourth-generation OLED production line in Fujian. The development of a new facility will increase the company’s flexible OLED capacity to about 192,000 units monthly. Additionally, in January 2019, Samsung revealed its new foldable phone with a 7.3-inch bendable screen at CES 2019. The device is expected to get commercialized in the coming years after the elimination of structural faults in the phone.

The foldable display market consists of a few players mainly from the Asia Pacific region and is highly competitive as manufacturers compete to gain early product commercialization benefits over the competitors. The industry is experiencing steady growth due to high technology & component costs and high initial investments required for product development. However, the leading manufacturers are expected to launch their products over the forecast years and revolutionize the global smartphone industry. Additionally, the increasing focus on R&D activities and technology development trends is supporting the industry growth.

The market size of foldable display valued at over USD 65 million in 2018.
The industry share of foldable display is predicted to grow at a CAGR of around 75% from 2019 to 2025.
According to this forecast report by GMI, the global industry shipments are expected to exceed 155 million units by 2025.
High disposable income at hand has increased the spending capacity in North America, driving the sales of expensive electronic devices that will help in the early adoption of the technology.
Key industry players include Samsung, LG Display, Royole Corporation, BOE, Semiconductor Energy Laboratory, and Tianma.