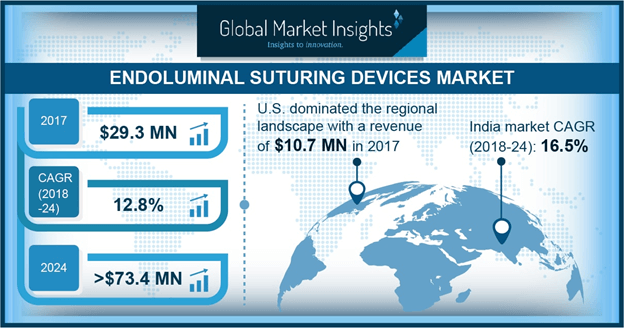 Increasing prevalence of chronic diseases such as will boost market growth during the foreseeable future. Adoption of unhealthy diet and alcohol abuse along with sedentary lifestyle are the major causes of growing incidences of obesity. According to World Health Organization (WHO), in 2016, about 650 million people suffered from obesity. High prevalence of obesity will lead to high adoption rate of endoluminal suturing devices during the projected timeframe. Continuous rising chronic disease incidences will have significant implication of healthcare resources, thereby accelerating industry growth. 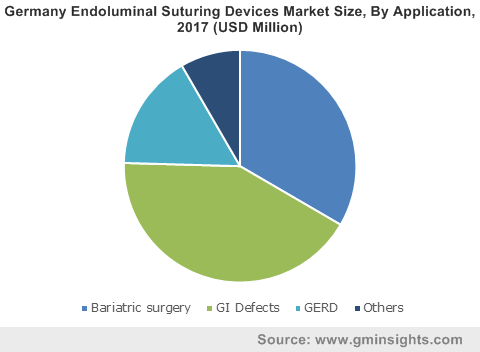 Endoluminal suturing devices hospitals business will grow with a rate of 12.8% during the forecast timeframe. High growth rate is due to growing burden of obesity across the globe. Moreover, New clinical trials conducted in multi-speciality hospitals will provide opportunities to the patients to explore new experimental therapies, thereby fostering segmental growth. Growing burden of chronic diseases and development of healthcare infrastructure will favor segmental growth in the future.

U.S. endoluminal suturing devices market contributed to largest revenue of USD 10.7 million in North America in 2017. High prevalence of chronic conditions such as obesity cases will be the major factor for U.S. growth. As per the estimates of Organisation for Economic Co-operation and Development (OECD), about 47% of the total population suffer from obesity in 2017. High burden of chronic diseases should drive industry growth in the future.

Indian endoluminal suturing devices market is forecasted to expand at the rate of 16.5% CAGR across the forecast timeframe owing to increasing prevalence of GERD. According to a study published in National Journal of Community Medicine, about 23.6% of the population suffered from gastroesophageal reflux disease. Moreover, escalating medical tourism to treat conditions such as obesity due to significant improvement in quality of healthcare amenities and lower cost is expected to favor industry growth.