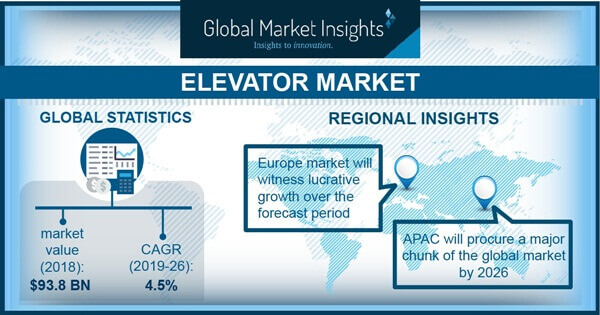 Elevators or lifts are vertical transportation compartments housed in a shaft or platform for lowering and raising people or materials between floors or levels. They are usually driven by electric motors that power counterweight systems and traction cables or pump hydraulic fluid to elevate a cylindrical system. Majority of the multistoried buildings have lifts in order to enable ease of travel and wheelchair access laws. Ever-growing need for high-rise accommodation to deal with growing population will continue to drive the elevator market.

The history of lifts dates back almost 2000 years. During the 3rd century B.C, lifts were known as hoists. They were powered by animal and human power while some of them even operated on water-driven mechanisms. During the 18th Century, modern elevators came into existence. These basic lifts witnessed evolution to hydraulic power-based systems from steam-driven mechanism over the next few decades. Water pressure was used as the power source in the first ever hydraulic lift. Elevators/hoists found rapid acceptance across Europe for the transportation bulk quantities of finished goods as well as raw materials in factories. Since then, elevator industry has witnessed various revolutionary advancements that made the product safer, faster and enabled the product to transfer more load across longer distances. Elisha Graves Otis presented the first ever safety contrivance for lifts in 1852. Wener Von Siemens invented the electric elevators in 1880. Hoist mechanism and newer products simplified the installation process and made lifts even more compact. As the global construction market is anticipated to grow in the coming decades, elevator market will also prosper during the study period.

Rapid development in building & construction industry in Asia Pacific region will be the principal driver for the growth of global elevator market during the study period. Global construction market is poised to exceed USD 15 trillion by 2030, and will be majorly driven by China, the U.S. and India. China is one of the largest construction markets in the world. Increasing population, rising industrialization and urbanization, economic development and growing infrastructure spending has boosted the construction activities in the country. Recently, local authorities in Beijing announced 300 major projects for high-end industries, infrastructure development and to improve people’s livelihood. Additionally, larger construction projects such as Beijing Airport will further augment the growth of construction sector of the country. India is one of the fastest growing construction markets in the world. Initiatives such as Pradhan Mantri Awas Yojana, Smart City Mission, etc. from the Indian government has attracted significant investment and has boosted the construction activities in the country. Construction markets in other countries like Vietnam and Indonesia in the region will also experience high growth rates in coming years. These favorable trends in the region will boost the global elevator market during the study period. However, high maintenance and installation cost might hinder the market growth in coming years.

MR traction elevator product type will account for just under half the total revenues during the study period. It is majorly preferred for mid-rise as well as high-rise buildings owing to their longer travel distance and higher speeds. It comprises of traction, geared and gearless traction lifts. Traction type lifts are elevated by using ropes, passing-over a wheel which is attached to an electric motor over the shaft. Geared traction type has a gearbox to drive the wheels for the movement of ropes and is attached to motor. On the other hand, gearless traction type has wheels directly attached to motor. Increasing construction of mid and high-rise building in Asia Pacific region will augment the growth of this product segment in coming years. 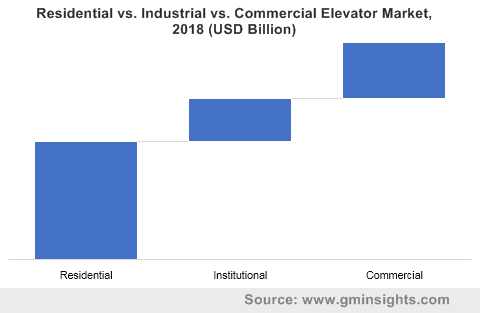 Increasing residential construction activities in Asia Pacific and Middle East region will augment the growth of residential industry in coming years. Based on industry, the market is categorized into industrial and building and construction which is further classified into commercial, institutional and residential. Building and construction industry segment is likely to have majority of the market share during the study period driven by the high application in residential buildings. Rapid urbanization, increasing development in disposable income of middle-class populace, rising private & public investments has boosted residential construction in the developing countries and will further augment the product application in this industry segment in coming years. 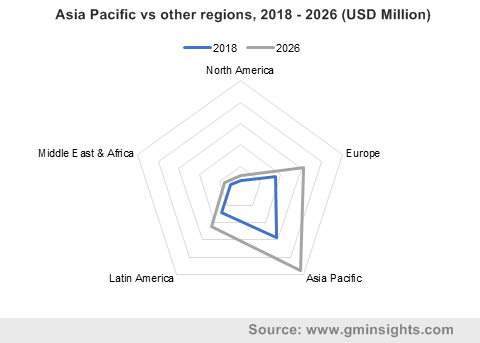 Asia Pacific will dominate the elevator market during the study period. It can be attributed to rising industrialization and development in the regional construction sector. Favorable government regulations as well as initiatives will majorly influence the development of regional construction industry. Moreover, countries such as China and India have attracted substantial investment in their construction sector. Such trends will augment the growth of Asia Pacific region during the study period.

The elevator market is characterized by acquisitions of smaller regional companies by larger global giants. In 2018, Kone completed the acquisition of Ascensores R Casado S.A., which provides maintenance, installation and modernization services in Spain. This acquisition has helped Kone to boost their customer base in Spain and strengthen their position in European market. The elevator industry also has many small players that cater to the demand of local customers for both elevators and repair & maintenance activities. New product development, focused R&D activities, mergers & acquisitions are some of the key strategies adopted by the industry players to strengthen their competitive advantage in the market.

The elevator industry research report includes in-depth coverage of the industry with estimates & forecast in terms of revenue in USD million from 2016 to 2026, for the following segments:

Elevators or lifts are vertical transportation compartments housed in a shaft or platform for lowering and raising people or materials between floors or levels driven by electric motors that power counterweight systems and traction cables or pump hydraulic fluid to elevate a cylindrical system.
According to Global Market Insights, Inc., the value of elevator industry was over USD 90 billion in 2018 and the market is forecast to grow at 4% up to 2026.
Asia Pacific is dominating the elevator market owing to rising industrialization, development and substantial investment in the building & construction industry along with suitable government regulations & initiatives.
This GMI report forecasts the building and construction industry to have majority of the market share during 2019-2026.