Electrosurgical Devices Market size was valued at USD 8.1 billion in 2020 and is estimated to grow at over 4% CAGR between 2021 and 2027. The rising prominence of minimally invasive surgeries has led to the shift from conventional cutting tools such as surgical blades and lasers to electrosurgical devices. The increased levels of accuracy as well as high reliability are some of the factors driving the market growth. The introduction of monopolar as well as bipolar electrosurgical units (ESUs) has widened the scope of application for such devices. Furthermore, the growing number of surgeries in several streams of healthcare has propelled the market expansion. 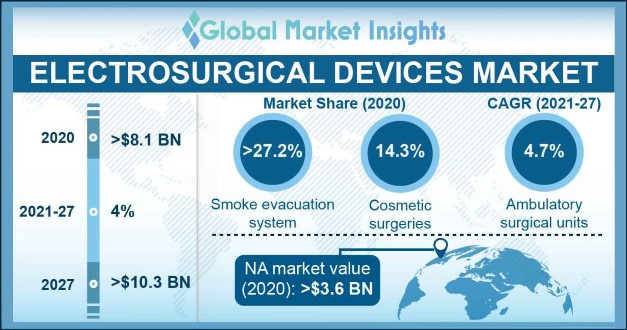 Also, the electrosurgical devices form an integral part of the surgeries today. However, governments around the world have asked respective healthcare systems to postpone the non-essential surgical procedures in wake of COVID-19 pandemic. This is anticipated to impact the market in the short term. Additionally, logistical disruptions can potentially lead to product shortages in the market owing to higher dependence on the U.S. for supply as well as demand. On the upside, several associations have released guidelines for virtually all specialties. This move ensures smooth as well as safe surgical procedures while assisting the market gain traction.

With surgeries being an indispensable part of healthcare sector, an increase in the number of surgeries leads to positive gains in the global electrosurgical devices market. An increasing number of population with health issues, such as cardiovascular illnesses, urological and gynaecological diseases as well as orthopaedic illnesses, is noted to resort to surgical treatments. According to the International Society of Aesthetic Plastic Surgery, about 11.4 million cosmetic surgeries were performed globally in 2019, nearly 7.1% higher as compared to the preceding year. Similarly, for other surgical procedures, the demand for surgeries is increasing in tandem with the growing prevalence of the illness. As electrosurgical devices are noted to be relatively efficient, causing limited blood loss and significantly reduce the recovery time, these are highly adopted by surgeons across regional markets, fuelling the market revenue during the forecast period.

While electrosurgical devices are highly effective and accurate, one of the prominent and only demerits is the smoke produced. These are studied to be toxic for the healthcare staff as well as the patient in the operating room. The American Safety and Health Administration has projected that nearly 500,000 personnel are exposed to electrosurgical smoke annually. Operating in such an environment can result in inhaling toxic gases such as carbon monoxide, hydrogen cyanide and benzene, among others. These can cause health issues such as respiratory and eye irritation and nausea, in some cases. In addition, prolonged exposure to surgical smoke can lead to non-acute health complications that are difficult to trace back to the surgical smoke. However, several states in the U.S. are formulating laws for better management of surgical smoke. Mandatory use of smoke evacuators is slated to nullify the impact of toxic fumes on the global market growth. Several manufacturers are also noted to work towards technological advancements in order to facilitate effective smoke evacuation, thereby leading to the industry expansion. 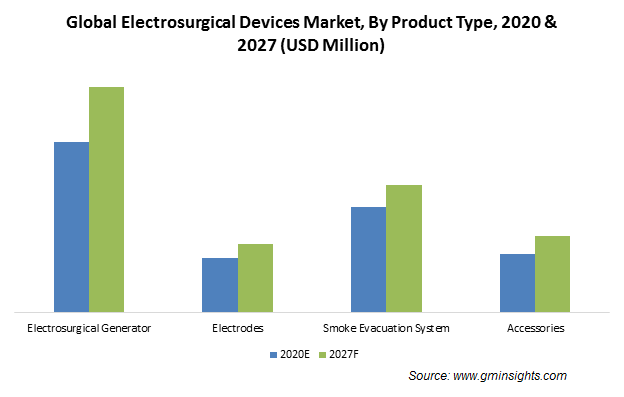 The gynecology segment is projected to register a 5.1% growth rate till 2027. Growing number of gynecological diseases are observed around the world. These can be attributed to women’s changing lifestyle and the body’s subsequent reaction to the same. Changed dietary habits, reduced physical activity, increased stress levels are all contributing factors towards the rise in cases involving gynecological illnesses. Most of these illnesses are advised to be treated through a surgical procedure. Hence, the industry demand for electrosurgical devices in gynecology surgeries is predicted to be on a rise throughout the forecast period, followed by cosmetic surgery.

The hospitals end-use segment in the electrosurgical devices market exceeded USD 3.5 billion in 2020. Hospitals have been reported to perform majority of surgeries and hence, the demand for electrosurgical devices and related instruments as well as accessories is significantly higher. As electrosurgical devices form an integral part of a surgical setup, existing as well as newly developed hospitals strive to maintain high quality products. Patients in under-developed as well as developing countries are noted to rely heavily on inpatient surgeries as opposed to the rising trend of ambulatory surgical units in the developed part of the world. These are poised to largely drive the segment revenue during the forecast period. Further, the gradually increasing number of surgeons and other skilled staff in every part of the world will foster the segment expansion. 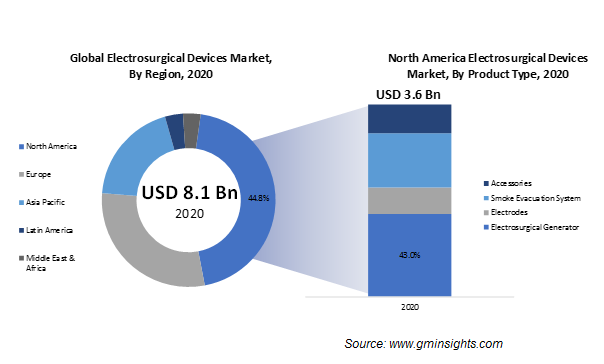 North America electrosurgical devices market accounted for more than USD 3.6 billion in 2020 owing to the early adoption of novel technologies, higher surgery rates and an increasing geriatric population. According to the Centers for Disease Control and Prevention (CDC), heart diseases are the leading cause of death in the U.S., for both men and women alike. The rising number of urologists as well as gynaecologists represents a considerable rise in the prevalence of respective diseases. Furthermore, nearly 1.4 million cosmetic surgical procedures were reported in the U.S. alone in the year 2019. The growing number of geriatric population increases the confidence in the optimistic forecast outlook for the market in the region. Thus, the consumption of electrosurgical devices in surgical treatments in North America is anticipated to maintain its dominance in the industry during the forecast timeline.

The electrosurgical devices market research report includes an in-depth coverage of the industry with estimates & forecast in terms of revenue in USD from 2016 to 2027, for the following segments:

The market for electrosurgical devices was valued at USD 8.1 billion in 2020 and will expand at over 4% CAGR between 2021-2027 due to high reliability and increased levels of accuracy of minimally invasive surgeries.
The electrosurgical generator segment accounted for 43.6% of the market share in 2020 and will grow owing to the large-scale adoption of advanced ESUs having integrated monopolar/bipolar modes.
The industry share from gynecology segment will register a healthy CAGR of 5.1% through 2027 due to women’s changing lifestyle and majority of the illnesses being treated through a surgical procedure.
The market share from hospitals end-use segment surpassed USD 3.5 billion in 2020 and will expand due to most of the surgeries being performed at hospitals and a gradual increase in the number of surgeons and other skilled staff.
North America electrosurgical devices market value was pegged at over USD 3.6 billion in 2020 and will grow by 2027 owing to the early adoption of novel technologies, higher surgery rates and an increasing geriatric population.
Customize this Report
Inquiry Before Buying