The market growth is attributed to the rising urbanization and favorable government initiatives through projects such as safe city and smart city. Large scale terrorist attacks and growing instances of organized crimes, such as smuggling, property theft, etc., are fueling the demand for electronic security systems in the market. The presence of surveillance and access monitoring equipment can also reduce the occurrences of vandalism and homicides. The growing emphasis on technologically advanced radars, surveillance systems, and night vision equipment is driving the market expansion. 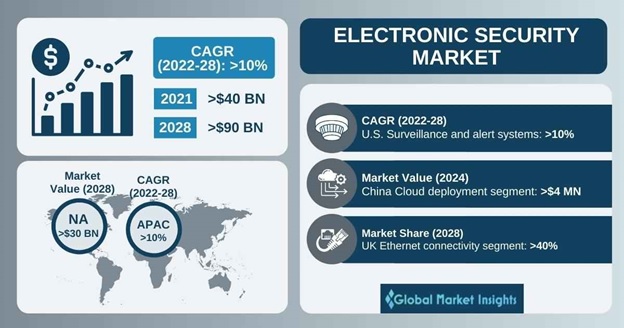 The electronic security market progression is credited to the increasing instances of property concerns and break-ins across geographies. The lack of adequate security measures taken up by consumers residing in high population locations in the U.S. is contributing to the increasing instances of security breaches and property theft. A high-quality electronic security can reduce the number of security guards and armed patrols and increase the overall visibility to all areas of a commercial location. The companies operating in the market are expected to develop an advanced electronic security system to cater to consumer demand.

In China, the demand for surveillance and alert systems is projected to grow significantly over the forecast timeline. Surveillance and alert systems are increasingly used in public places such as malls, bus stations, and airports. Variations in closed-circuit televisions, such as HD CCTV, analogue CCTV, ANPR systems, and video analytics, cater to requirements from several applications. The advanced operational capabilities of these electronic security systems will support the overall industry growth.

In the UK, the cloud deployment segment will reach USD 500 million by 2022 led by the expansive digitization and penetration of CCTV cameras across the country. The regional authorities are also focusing on enhancing the regulatory framework. For instance, in June 2019, the UK government announced new security standards and compliance mark for manufacturers of CCTV cameras. There has been an extensive deployment of surveillance systems across cities in the country. These factors are poised to fuel the demand for cloud-based electronic security solutions. 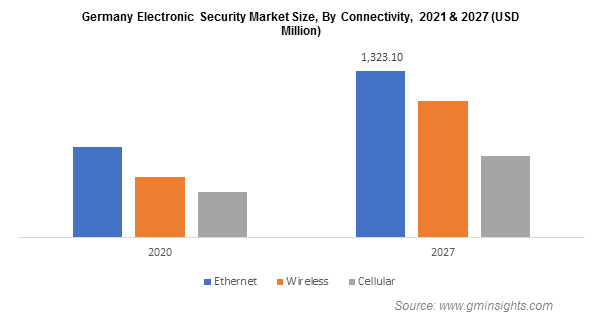 In Germany, the ethernet connectivity segment is likely to cross USD 1 billion by 2027. The modern electronic security systems including surveillance cameras leverage ethernet connectivity to transmit the digital information to host computers. In addition, several enterprises in the market have developed electronic security systems with the support of power-over-ethernet (PoE) technology to manage both power flow and data transmission. The country is also witnessing substantial deployments of wireless surveillance systems.

In Canada, the public sector application segment is set to progress at a significant growth rate of 10% through 2027. Theft of nuclear weaponry and radioactive products by unauthorized personnel for the creation of dirty bombs can lead to large scale destruction. To avoid this, the installation of electronic security has become a necessity in places such as nuclear facilities and medical & scientific laboratories. Electronic security equipment is predicted to observe a significant adoption by public security agencies due to installations in streets and heavy traffic roads. 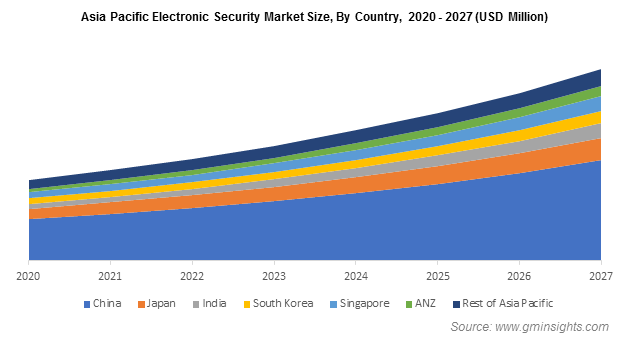 Asia Pacific electronic security market is estimated to attain a CAGR of over 10% during 2021 and 2027. The increased demand to safeguard the national security from terrorist attacks is one of the major factors enabling the demand for electronic security solutions in the market. This demand is also boosted by the rising spending to protect the critical infrastructures such as airports, banks, trade centers, government headquarters, and enterprise facilities. Additionally, rapid urbanization and continuing globalization have increased the need for advanced security solutions across the industry verticals, propelling the industry expansion.

The electronic security market research report includes in-depth coverage of the industry with estimates & forecast in terms of revenue in USD from 2016 to 2027 for the following segments:

The global market size of electronic security was valued at over USD 40 billion in 2020 and is poised to record a CAGR of more than 10% up to 2027.
China market size from surveillance and alert systems will grow considerable due to increasing adoption in public places, including malls, bus stations, and airports.
The regional industry revenue from the cloud deployment segment could cross USD 500 million through 2022 owing to the growing digitization and higher usage of CCTV cameras in the country.
Canada market share from the public sector application will grow at 10% rate through 2027 with rising instances of theft of nuclear weaponry and radioactive products by unauthorized personnel.
Asia Pacific electronic security market size will observe a 10% CAGR up to 2027 driven by the surging need for national security from terrorist attacks in the region.
Customize this Report
Inquiry Before Buying