Drug-Eluting Balloon Catheters Market size exceeded USD 452 million in 2021 and is anticipated to progress at 10.3% CAGR from 2022 to 2028 owing to the surging geriatric population coupled with increasing number of patients suffering from cardiovascular and peripheral disorders globally. 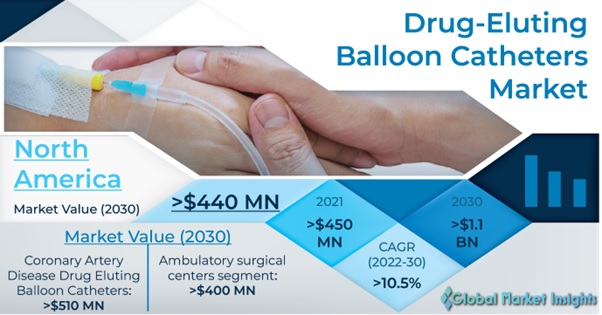 Various technological advancements in manufacturing and the development of advanced drug-eluting balloon catheters for minimally invasive surgeries are set to drive the market growth over the projected timeframe. The rise in the number of patients suffering from atherosclerosis, obstructive coronary artery disease, peripheral vascular disease, etc. has promoted the use of drug-eluting balloon catheters and is anticipated to drive the market growth in the coming years.

Further, the rising prevalence of chronic diseases and the demand for minimally invasive surgical procedures have increased demand for technologically advanced products across healthcare settings. Increasing life expectancy and faster diagnostic procedure among geriatric population base due to the use of advanced products for surgeries has driven the market growth in the past few years.

A drug-eluting balloon catheter is a type of medical equipment used to administer anti-proliferative medications to the body in a precise and effective manner. These catheters are used during a surgical procedure to allow drugs to be ingested via a vascular wall via an inflated balloon. These catheters aid in the faster recovery of the vascular wall and to prevent the growth of smooth muscle cell inside the body.

However, the high cost of advanced drug-eluting balloon catheters coupled with increasing risk of infection associated with the product may have a negative impact on the industry growth. The product demand is significantly increasing at a steady pace due to the rising number of coronary artery disorders, cardiovascular, and other chronic diseases.

Costly catheterization procedures associated with cardiovascular and peripheral diseases may hamper the adoption rate of drug-eluting balloon catheters in underdeveloped countries. According to the recently published article, the average cost of a cardiac drug-eluting balloon catheterization procedure ranges from USD 3,074 to USD 3,854 in the U.S. The high prices of these products and associated devices may act as a barrier to market growth.

Due to the high costs related with drug-eluting balloon catheterization treatments, market expansion in emerging economies with low-income levels may be hindered. As a result, countries with low economic development may struggle to adopt such high-priced products. As a result, the high cost of these sophisticated drug-eluting balloon catheters may impede market expansion throughout the forecast timeframe.

During the COVID-19 pandemic, there was a decline in the frequency of surgical procedures related to cardiovascular diseases wherein drug-eluting catheters are primarily used for drug administration in critical cases. Emergency and general cases related to heart diseases recorded a significant setback that influenced product acceptance to some extent. According to the report published in March 2020, there was a spurn in endovascular therapy by 32% in over 8 countries across the globe. However, with the rising number of patients suffering from cardiovascular diseases, the number of CAD procedures are expected to rise again in the coming period.

Various international government authorities have amended key guidelines to ensure the utmost safety of patients and healthcare workers in the treatment and management of chronic diseases. Despite reduced patient admissions in 2020, a decrease in COVID-19 instances and a substantial proportion of the population suffering from chronic illnesses are likely to drive the drug-eluting balloon catheters market growth in the coming years.

According to the reports published by the Centers for Disease Control and Prevention (CDC), in 2019, the total number of mortality due to aortic diseases in U.S. was around 9,904 out of which 59% of the total deaths were men and 41% were female. Unhealthy eating habits, smoking, high blood pressure and blood cholesterol levels, atherosclerosis, etc. are some of the major factors relating to increasing number of cardiovascular disorders among people across the globe.

Asia Pacific region has the highest number of patients suffering from peripheral artery disorders and the numbers are surging at an unprecedented rate. Hence, the increasing prevalence of peripheral and cardiovascular diseases among adults and geriatric population at an unprecedented pace will accelerate the drug-eluting balloon catheters market sales in the coming years.

These peripheral vascular balloon catheters help in drug administration, inhibit neointimal growth of vascular smooth muscle cells, and prevent restenosis thereby increasing patient safety during surgical procedures. The rising prevalence of atherosclerosis among adults is one of the important driving factors for the increasing adoption of the product.

For instance, according to the reports published by the PubMed Central (PMC), in 2019, the prevalence of atherosclerosis ranged between 3% to 12% over various regions across the globe. Additionally, in 2019, Europe and North America collectively witnessed over 27 million patients suffering from atherosclerosis.

As a result, the use of drug-eluting balloon catheters for vascular diseases has increased significantly in recent years, owing to benefits such as lower procedural costs, fewer post-operative problems, and less nursing care time, that are expected to boost segmental growth in the coming years.

As per the research article published by the BMC Nephrology, in 2019, the use of vascular catheters was around 54% globally. Therefore, the demand for accurate, precise, and effective peripheral vascular disease drug-eluting balloon catheters is projected to propel significantly. 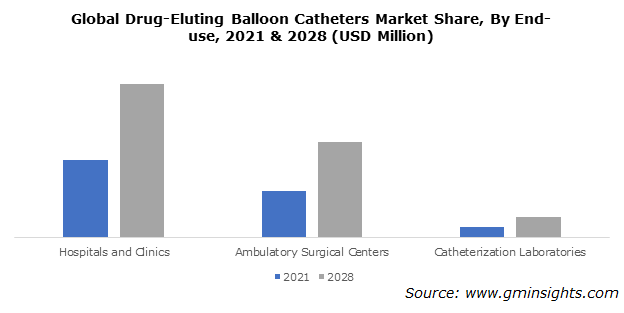 Based on end-use, the drug-eluting balloon catheters market is segmented as hospital & clinics, ambulatory surgical centers, and catheterization laboratories. The hospital and clinics segment held a dominant market share in 2021 and is anticipated to expand at 10.1% CAGR between 2022-2028 owing to the increasing number of in-patient admissions in hospitals for catheterization procedures along with surging preference for minimally invasive procedures is anticipated to spur the market demand.

Rising number of geriatric patients and end-stage chronic diseases associated with them require complex interventional surgeries. The rising adoption of drug-eluting balloon catheters for intake of various drugs during surgical procedures is an effective method of drug administration and is preferred by surgeons. Moreover, the enhanced post-surgical care provided by the caretakers and nursing professionals are surging patient preference for hospitals and clinics.

The rise in the incidence of vascular & urological diseases, arrhythmia, etc. coupled with availability of highly skilled medical and healthcare professionals are some of the driving factors for the market expansion. Furthermore, the emphasis on health infrastru cture development in emerging countries will result in the establishment of a wide hospital network, that will increase product acceptance rate in the coming years. 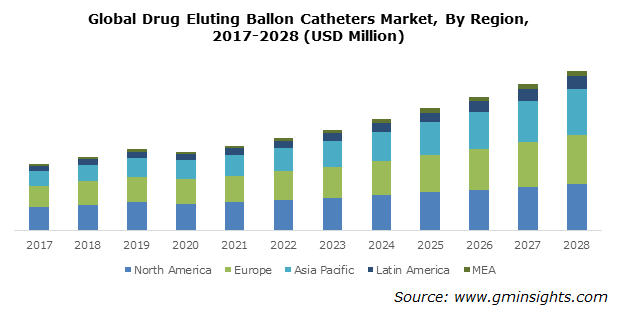 U.S. drug-eluting balloon catheters market is anticipated to expand at 8.7% CAGR during 2022-2028 period due to factors such as increasing prevalence of cardiovascular diseases such as coronary artery disease, peripheral disorders, arrhythmia, heart valve disease, heart failure and renal failure among others.

For instance, according to the reports published by the Center for Disease Control and Prevention (CDC), over 18.2 million adults suffered from coronary artery disease in 2020 and accounted for about 2 mortalities in every 10 patients. Moreover, according to the NCBI, over 1 million cardiac catheterization procedures are performed annually in the U.S. Changing lifestyle of people in the country such as surging obesity prevalence, unhealthy diet, and excessive consumption of alcohol has significantly affected their health.

According to the World Health Organization (WHO), cardiovascular diseases are one of the leading cause of deaths in the U.S. This surging disease prevalence is expected to augment the requirement for drug-eluting balloon catheters. Additionally, growing geriatric population base coupled with increasing hospitalization rate also projected to boost the country's market growth. Furthermore, the presence of major market players in the region will boost drug-eluting balloon catheters market value and adoption rate.

Drug-eluting balloon catheters market report includes an in-depth coverage of the industry with estimates & forecast in terms of revenue in USD from 2017 to 2028, for the following segments: