Display Market size valued at USD 7 billion in 2016 and will grow at a CAGR of around 14% between 2017 and 2024. The global industry shipment were over 45 million units in 2016 and are expected to register 16.5% growth rate during the forecast period.

The global display market growth is owing to technological advancements in touchscreen technology such as surface acoustic wave technology. Further, the reducing cost of components, such as controllers, touch sensors, and software drivers, is encouraging the end users including retailers to adopt advanced systems. 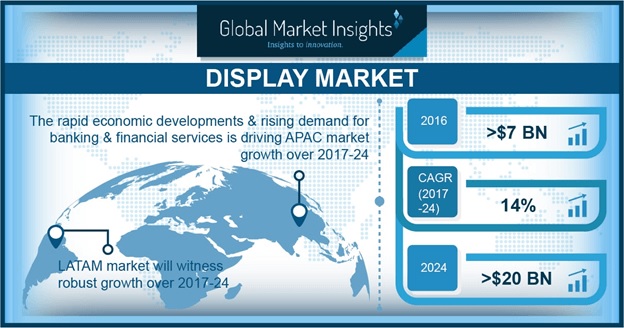 The deployment of technologically advanced systems such as smart ATMs and NFC-enabled POS systems will propel the display market demand. The deployment of smart and next-generation ATMs is increasing due to their ability to reduce the number of bank branches and perform on-the-go banking by providing services such as money transfer, cash deposit, and check clearance. The deployment of smart ATMs is encouraging the manufacturers to develop advanced displays, escalating the industry demand. Moreover, rising shipments of POS systems are offering growth opportunities to the companies operating in the market.

Reducing the number of ATM deployments in countries including U.S., UK, and Germany is projected to challenge the display market growth. The high cost of ATM systems and increasing number of ATM frauds are compelling banks and financial services to reduce the number of ATMs. Additionally, growing online and mobile payments are reducing the ATM usage considerably. However, the rising usage of POS and kiosk systems is expected to reverse the impact of reducing ATMs on the overall market.

Growing number of kiosks across various applications such as ticketing, self-checkout, and information presentation in industries such as retail, financial services, entertainment, and healthcare is anticipated to drive the kiosk display market revenue. These systems are being adopted widely across the retail sectors in countries including UK, U.S., and Germany as these offer faster checkout and easier transactions. Self-service checkout technologies are rapidly growing as customers gravitate toward the efficiency, convenience, and small queues that are provided by self-service retail kiosks. This is offering a push to the manufacturers to integrate advanced technologies in the displays.

Increasing adoption of POS terminals owing to the penetration of chip-embedded cards to reduce security concerns is expected to bode well for the POS display market. Government initiatives, such as demonetization in India, have increased the POS usage considerably in the past few years. The penetration of technologies, such as cloud and SaaS-based POS to improve functionality, is driving the demand for POS terminals. Factors such as rising inclination toward online payments and rising penetration of EMV cards are predicted to fuel the industry demand. The growing adoption of digital payment services has led to the rise in non-cash payments across the world, increasing the demand for POS terminals.

ATM display size above 10” is poised to witness significant growth through 2024 on account of the growing demand for multi-function ATMs. Customers are demanding one-stop ATM solutions as an alternative to banks. In addition, banks are deploying multi-function machines to reduce the number of bank branches and improve the profitability. Large multi-touch displays in ATMs allow tablet-like interactions and allow consumers to zoom, pinch, and swipe their way through transactions.

15” POS display market will gain substantial pace during the forecast period led by low costs as compared to above 15” screens and high quality as compared to below 15” screens. Large-scale adoption of POS systems in sectors including retail, entertainment, hospitality, healthcare, and warehouse & distribution is slated to propel the industry share.

Increasing need to replace the existing old machines in countries including India and China in the Asia Pacific region is boosting the ATM display market size. However, initiatives such as digitization and demonetization have encouraged the screen manufacturers to shift their focus on POS and kiosk components. Service providers, such as restaurants, are increasing the use of kiosks and POS terminals to improve operational efficiency and minimize the risks pertaining to handling cash. The implementation of these systems has allowed these users to reduce errors due to human intervention and improves the profitability.

The Germany display industry is projected to showcase steady growth in the coming years driven by rising mobile payments industry in the country. Moreover, the steady growth is characterized by the inclination of people in the region toward making payments through cash and prefer to pay through notes over POS. However, large retailers in Germany, such as Aldi North & Aldi South, Metro, Lidl, and Edeka, are increasingly investing in contactless payment terminals to encourage cashless payments.

Some of the major players in the display market include NCR Corporation, Fujitsu Limited, Epson America, Inc., Fametech, Inc., Displax SA, Diebold Nixdorf, Inc., and Ingenico Group. The industry is highly fragmented in nature and the players are continuously investing in developing high-quality products.

The display market research report includes in-depth coverage of the industry with estimates & forecast in terms of revenue in USD and shipment in Units from 2013 to 2024, for the following segments:

The market share of display will grow at a CAGR of around 14% between 2017 and 2024.
The global industry shipment were over 45 million units in 2016 and are expected to register 16.5% growth rate during the forecast period.
Some of the major players in the market include NCR Corporation, Fujitsu Limited, Epson America, Inc., Fametech, Inc., Displax SA, Diebold Nixdorf, Inc., and Ingenico Group.
Increasing need to replace the existing old machines in countries including India and China in the Asia Pacific region is boosting the ATM display segment size.
Growing number of kiosks across various applications such as ticketing, self-checkout, and information presentation in industries such as retail, financial services, entertainment, and healthcare is anticipated to drive the kiosk display segment revenue.