Concrete Surface Treatment Chemicals Market size estimated at USD 8 billion in 2018 and will grow at a CAGR of more than 8% from 2019 to 2025. Increasing urbanization, growing population in China & India, cheap work force, expanding economic growth are some of the factor responsible for the growth in the Asia Pacific construction sector.

The treatment of concrete surface is essential for developing the strength and durability of the material. This is done using certain chemicals that substantially enhance the aesthetics and abrasion resistance of the surfaces. The concrete surface treatment chemicals market is anticipated to proliferate over the coming years with the growing production of construction chemicals.

Developments in the Asia Pacific construction industry would be the major growth driver for the concrete surface treatment chemicals market. The global construction sector is expected to expand in the next decade to a nominal value of more than USD 6.0 trillion. Asia Pacific held a significant share of this value and this share will grow in the coming years. This would in turn increase concrete surface treatment chemicals demand. 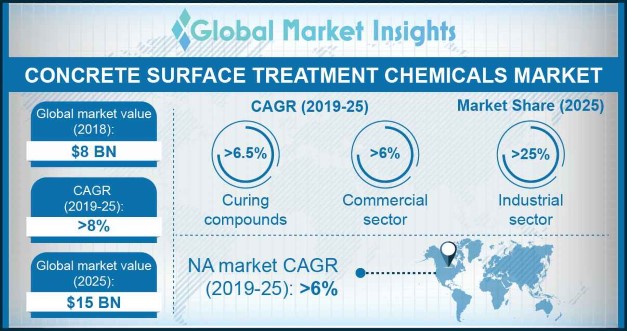 China plays a major role in augmenting the market share. The country’s construction industry achieved 17% growth in market value in 2016. With both public and private investment in infrastructure rising in the country, China will continue to play a major role in the concrete surface treatment chemicals market share in the future. Changing regulatory framework has also helped in driving the market.

For instance, Smart City Mission and the Atal Mission for Rejuvenation and Urban Transformation (AMRUT) by the Indian government, relaxation of real estate regulations by China, etc. are some examples which would lead to increased construction activities in the region, in turn escalating concrete surface treatment chemicals demand in the forecast period.

Limited use of certain products in developing regions due to abundance of other resources and use of harmful raw materials in the product are some factors which could restrain the growth of concrete surface treatment chemicals market in the coming years.

The concrete surface treatment chemicals market is categorized, based on product, as curing compounds, mold release agents, sealants and others. Mold release agents occupies the largest market share in the global industry and is likely to grow by a CAGR of more than 7% over the forecast timeframe. Mold release agents help in avoiding the adhesion of freshly placed cement to a forming surface.

Water-based mold release agents would gain greater importance in the coming years due to its environmental benefits. Other functions of mold release agents include minimizing the occurrence of blowholes, providing a better surface finish along with minimum loss of water from the cement.

Sealants held a considerable share in the market in 2018. The product is majorly used in the residential and commercial end-user industries to seal cracks in floors and walls and for protection against water, moisture and dust. Developments in the global construction industry coupled with growing population in the developing regions will drive the concrete surface treatment chemicals market segment’s growth in coming years.

Based on end-user, the market is segmented into residential, commercial, industrial and municipal. Commercial is the largest end-user section which is likely to gain by more than 6% CAGR during the forecast timeframe. Extensive usage of the product by the commercial end-users like office buildings, retail outlets, garages, hospitals, institutions, etc. for repairing and maintaining the quality of the concrete will drive the concrete surface treatment chemicals market growth. 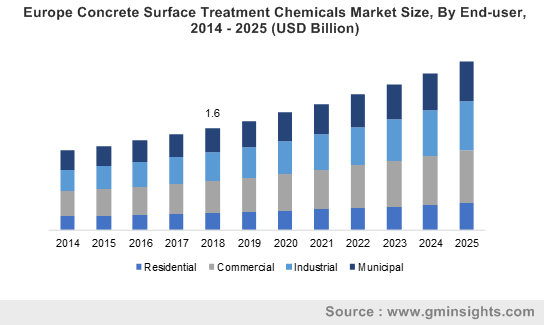 Municipal end-user category held a share of approximately 20% of the overall concrete surface treatment chemicals market in 2018. Curing compounds are significantly used in this end-user market to provide water retention to the surface exposed to sunlight. Municipal includes bridges, road construction and other civil structures. This segment is likely to grow at a CAGR of about 6% in the coming years. Progress in the emerging construction market will expand this segment’s growth during the forecast period.

The worldwide concrete surface treatment chemicals market was dominated by the Asia Pacific region, which accounted for more than half of the market share in 2018. High production capacity and rising demand from regions like China, India, Japan, and South Korea has resulted in the region’s dominant position in the market.

The product is extensively used in construction industry which has been booming in the emerging economies in the past years. Rising population, economic growth and improving government expenditure on infrastructural developments are some of the factors for the high CAGR growth in the region.

Another region occupying significant share in the market is North America. Even though the construction business in the region is nearly mature, presence of large number of product manufacturers in the region has helped the company to maintain its position. As the product is used for repair and replenishment, its demand would increase in the forecast timeframe. The region is likely to exhibit a CAGR of more than 6% in the study period.

BASF SE holds a significant share in the market with presence in all major continents. The company has expertise in chemical manufacturing and has immensely invested in research & development activities which would enable them to maintain their position in the market in the forecast timeframe.

Products in the concrete surface treatment chemicals industry are used for various purposes like retaining the moisture content in concrete, promoting adhesion between mold and cement and to improve and increase its life. The use of water-based chemicals is likely to increase in the market due to its limited negative effects.

Stringent government regulations and rising environmental pollution would further increase the use of this product as they are more environmentally sustainable. Limited availability of natural resources like water would also promote the usage of the product especially in the developing regions. These factors would further encourage the product usage and expand the revenue in the concrete surface treatment chemicals market.

Concrete surface treatment chemicals market report includes in-depth coverage of the industry with estimates & forecast in terms of volume in kilo tons & revenue in USD Million from 2014 to 2025, for the following segments: