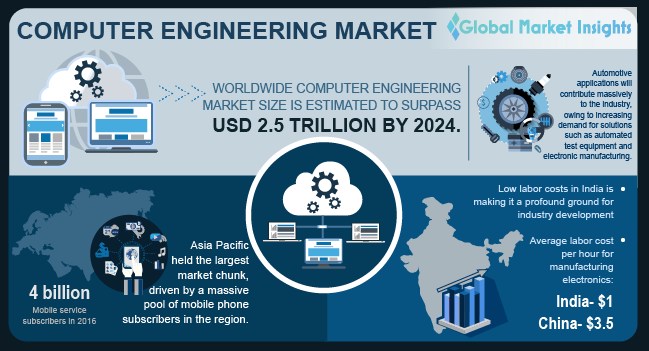 Growth in the field of internet and cloud computing is a major factor driving the computer engineering market. Increase in usage of electronic products in automotive, industrial, medical, and consumer industries has created a connected landscape for smart devices. Several software applications are being developed by developers to expand the potential of the connected devices. These developments have been fueled by innovations in the software and semiconductor industries. Several manufacturers are combining several components such as ICs, embedded software, custom logic, memory, and processor into a single System-on-Chip (SoC), which is necessitating highly complex chip designs which is a common trend in the industry.

Several semiconductor manufacturers are largely adopting the trend of miniaturization by delivering smaller sizes, flexible mounting possibilities, and integrating multiple functionalities into a single set. In some scenarios, this has enabled the semiconductors to be utilized in applications, where they were not used before, such as surgical devices and smart fitness products. The medicine industry is a promising application for the computer engineering market owing to the growing usage of medical implants in advanced medical therapies. These implants are helpful to detect several chronic conditions and can be safely charged, which is opening several new prospects for the segment. In addition, the semiconductor technology is providing healthcare consumers the ability to extend the lifetime of an implant as the battery can be wirelessly recharged, and can eliminate the need for battery in some conditions, thereby driving demand for the computer engineering market.

Mobile computer hardware is anticipated to exhibit the highest growth, owing to the increasing usage of smartphones and tablets. Asia Pacific contributed the largest share in the computer engineering market owing to rising phone subscriptions in the region. It had more than 4 billion subscribers in 2016. Rise in the number of smartphones and mobiles has attributed to development of new technologies, availability of low price handsets, and low voice calling tariff with substantial investment in construction of the telecom infrastructure by the mobile operators. In the communications industry, technological transitions, such as the IoT and the rollout of 4G/ LTE networks, is providing an impetus to the mobile computer adoption.

Automotive applications of computer engineering include infotainment, body electronics, and safety and security systems. Increasing demand for solutions such as automated test equipment and electronic manufacturing services will drive the computer engineering market. In certain regions such as China the demand for EVs and charging stations has led to the high demand for the microcontrollers. The U.S. provides tax credits of USD 2,000 to USD 7,500 per new EV purchased in the country. The provision of financial aid is anticipated to lower the up-front costs of plug-in EVs. Among various applications, the automotive sector is the highest revenue generation market. For instance, in 2016, ON Semiconductors reported that 34% of their revenue is generated through automotive applications. In addition, various trends such as usage of smart sensors in connected car systems is further driving the demand for efficient products in the computer engineering market.

Asia Pacific computer engineering market will witness considerable growth over the forecast timespan, owing to the presence of several semiconductor manufacturing companies. The government and industry bodies are attempting to increase the competitiveness of the electronics system design & manufacturing (ESDM) industry to meet the domestic demand and attract foreign investments. Moreover, the regional attractiveness for manufacturers is rising owing to the availability of low-cost labor in countries such as India, Indonesia and Thailand. The rise in manufacturing costs in Taiwan and China, has compelled the ESDM industry to shift their industrial base to alternative countries. In 2016, the average labor cost per hour for manufacturing electronics in India was around USD 1 as compared to USD 3.5 in China which is proving to be beneficial for the India computer engineering market.

The computer engineering market is highly fragmented in nature with presence of several manufactures and system developers. Players are adopting several strategies such as collaborations, agreements, partnerships, and mergers & acquisitions (M&A). A major trend amongst the ESDM providers is the subcontracting or outsourcing of the electronic manufacturing processes to other third-party companies. By undertaking this initiative, manufactures can focus on quality improvement, end-to-end designing, development, testing solutions and vital resources, such as monetary bonds, and skilled labour, to lessen the high variable and capital.

The market size of computer engineering crossed USD 1,800 billion in 2016.
The industry share of computer engineering will grow at a CAGR of around 5% from 2017 to 2024.
Rapid technological advancements in the electronics & semiconductor space, growing adoption of electronic components across mainstream industries, as well as expanding cloud computing sector will drive the global industry trends.
As per the study, APAC held the largest computer engineering industry revenue share in 2017 driven by the rising number of phone subscribers in the continent. Moreover, the expanding automotive and manufacturing sectors will further provide a substantial impetus to the regional demand.
The rising EV adoption and the consequent need for microcontrollers will drive the segment growth. In addition, increasing demand for infotainment, ATE, and advanced security solutions in the vehicles will further push the automotive application trends.