Commercial Aircraft MRO Market size was valued at over USD 78 billion in 2019 and is estimated to grow at a CAGR of more than 6% from 2020 to 2026. The aircraft MRO (maintenance, repair, and overhaul) service includes carrying out of operations and tasks for ensuring the airworthiness of planes including overhauling, defect rectification, replacement, inspection, and modifications. 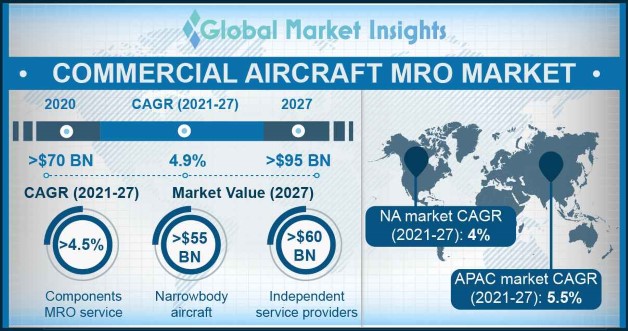 Increasing requirements for proper maintenance and refurbishments of aircraft for maintaining their optimum performance and complying with the strict regulatory norms are boosting the market growth during the forecast period. Advancements in technologies coupled with the requirement to address wear and tear of components further drive the market expansion.

After several aviation accidents caused due to negligence in maintenance activities during the 1990’s and 2000’s, authorities have tightened the norms for timely maintenance and repair works. 42% of all fatal airline accidents between 1994 and 2004 were caused owing to maintenance related problems. Presently, commercial aircrafts require a detailed maintenance and service inspection once in every 100 hours of operation.

Timely upgradation of the installed avionics is also mandatory in order to ensure a smooth and hassle-free flight. With advancements in aviation technologies, issues in the avionic systems may result to a disastrous consequence. Strong steps taken by aviation authorities to avoid human errors during MRO activities will have a significant impact on the market trends during the forecast period.

Digitalization and incorporation of advanced technologies to enhance MRO efficiency

High costs associated with the carrying out of MRO operations of aircraft may hamper the commercial aircraft MRO market progression during the forecast timeline. Moreover, high costs of spare parts and components, coupled with the aircraft downtime losses during complex operations, will incur a significant amount of time and complexities. However, to counter this issue, industry players are investing in innovative sensors and RFID technologies for sorting out the components and parts conveniently, thereby improving their business efficiency.

Modifications segment is projected to witness 7% growth rate through 2026. The advancements in technologies along with improvements in software systems play a major role in enhancing the system performance, thereby fuelling the segment growth. Increasing focus on flight safety and autonomous control will positively influence the trends of modification over the coming years. 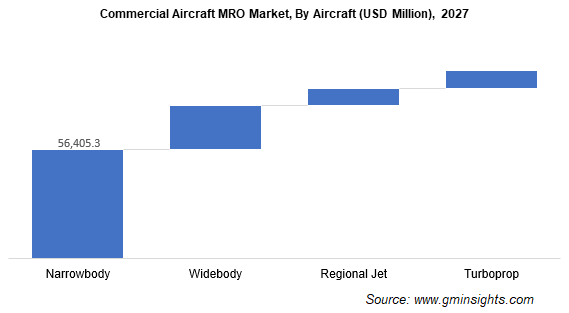 Narrow-body aircraft will dominate 50% of the market share by 2026. The rising air passenger traffic owing to the proliferating tourism industry coupled with improving spending capability is driving the segment expansion. The increasing demand for low-cost carriers offering attractive air tickets at significantly lower prices further boosts the segment revenue. Furthermore, aircraft manufacturers are continuously innovating and launching out new models for catering to the ever-growing demand for such aircraft. 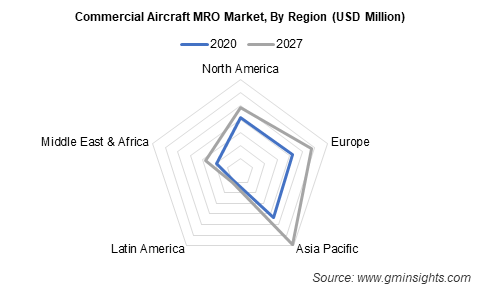 Middle East & Africa commercial aircraft MRO market is predicted to expand at a CAGR of over 6% through 2026. The increasing number of aging aircraft fleet coupled with older technologies in aircrafts is providing a positive outlook for expanding the industry share. Additionally, rising tourism along with the availability of technologically advanced and next generation widebody aircrafts is augmenting the regional growth. Digitalization and next-generation MRO services will further impel the regional expansion.

Some of the key players operating in the market are Boeing Company, Airbus, Gameco, Delta TechOps, GE Aviation, ST Aerospace, and MTU Aero Engines AG among others. Strategic long-term partnerships and contracts are set to play a major role in propelling the revenue share for companies.

The market research report on commercial aircraft MRO includes in-depth coverage of the industry with estimates & forecast in terms of revenue in USD million from 2016 to 2026, for the following segments:

The market size of commercial aircraft MRO surpassed USD 78 billion in 2019.
The industry share of commercial aircraft MRO is estimated to exhibit over 6% CAGR between 2020 and 2026.
MEA market will showcase a healthy growth of around 6% during the forecast period led by increasing number of aging aircraft fleet coupled with older technologies in aircrafts.
According to this forecast report by GMI, the narrow-body aircraft will dominate the industry with over 50% share during the study timeframe.
Some of the key players operating in the market are Boeing Company, Airbus, Gameco, Delta TechOps, GE Aviation, ST Aerospace, and MTU Aero Engines AG among others.