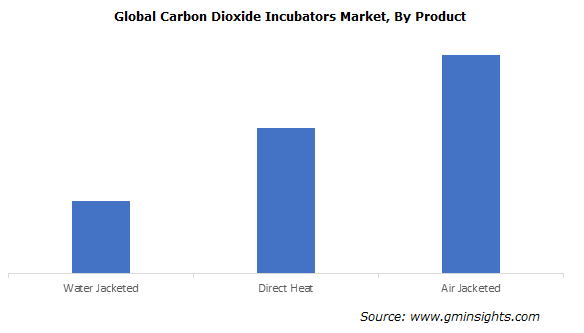 Co2 incubator creates a natural atmosphere to develop tissues and cell cultures. A CO2 incubator’s interior is sealed off to provide and ensure the atmosphere inside remains unaffected by some of the external factors. The interior is made from non-rust materials such as stainless steel. Carbon dioxide incubators are most prominently utilized in pharmaceutical, medical and other related fields. This device is mostly used in the development of tissue engineered products.

For instance, at the University of Zurich, The Swiss Center for Regenerative Medicines (SCRM) utilizes CO2 incubators for research therapies based on tissue engineering which comprise the cultivation of cell clusters and tissues. Also, it enables the growth of blood vessels and heart valves grown from stem cells. Such studies conducted by various research institutes and government organizations will create lucrative opportunities in the market, thereby supplementing the market growth.

On the basis of product, the market is segmented into water jacketed, direct heat and air jacketed CO2 incubators. Direct heat CO2 incubators will witness substantial growth during the forecast period years due to its varied advantages. For instance, direct heat incubators provide maximum decontamination by utilizing its built-in heat source.

On the basis of capacity, the carbon dioxide incubators are segmented into 50L-100L, 100L-200L, 200L and above. The 100Lto 200L is predicted to witness a substantial growth rate during the analysis period. This is due to the large capacity of incubators for increased productivity. In addition, it also provides optimal growth conditions with infrared controls for controlling CO2 gas levels.

North America carbon dioxide incubators industry is estimated to grow robustly during the forecast period due to the increasing need of in vitro fertilization in the U.S. For instance, according to Centers for Disease Control and Prevention (CDC), about 1-2% of the total births in the U.S. are as a result of IVF. Thus, such increasing cases of IVF will create profitable opportunities in the market, thereby driving the growth of the market.

Asia Pacific carbon dioxide incubators market share will show momentous growth potential through 2026. Rise in acceptance of carbon dioxide incubators for diagnostic testing, development of biosensors and cancer research drives the market growth. For instance, CO2 incubators are mostly used in virus identification or diagnostic purposes as it maintains stable incubation conditions. Thus, the increase in viral diseases and seasonal flu in the Asia Pacific countries will drive the market demand in the coming years.