Carbon Capture and Storage Market size exceeded USD 3 billion in 2019 and the cumulative capacity is anticipated to exceed 124 MTPA by 2026. Rising industrialization along with soaring investments toward introduction of emission control machineries will create significant market opportunities across various sectors including oil & gas, chemical and power generation across the globe. 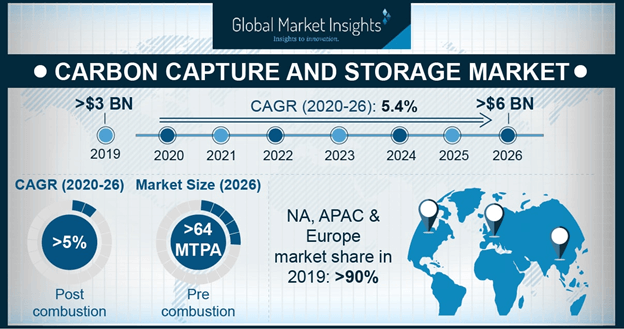 Carbon capture and storage (CCS) is a technology that captures around 90 percent of CO2 produced from various industrial operations on account of usage of fossil fuels. The technology mainly comprises of capture, transport, and CO2 safe storage across depleted hydrocarbon fields and deep saline aquifer formations. These tools separate the generated gas through pre combustion capture, post combustion capture and oxy-fuel combustion.

The captured CO2 is compressed into the liquid state and transported to the desired storage site. The transportation is mainly carried out by high capacity pipelines, ships and road tankers to various drilling locations. It is then pumped in the underground depleted oil and gas reservoirs, coalbeds and deep saline aquifers to raise their ongoing production. Rising energy demands coupled with soaring investment toward upstream & downstream sector will further enhance the carbon capture and storage market outlook.

Increasing industrialization rate coupled with the growing investment toward expansion of manufacturing facilities has raised the deployment of CCS projects globally. Several governmental policies to limit the greenhouse gases emission across the key economic sectors with the participation of regulators will further stimulate the carbon capture and storage industry growth over the forecast timeframe. However, high initial cost and significant complexity of system are some of the key concerns associated with the deployment of carbon capture and storage projects.

The carbon capture and storage market report feature a detailed analysis of industry trends on a global scale segmented on a country & regional basis across different technology and application. Moreover, the market forecasts & estimates are in line with the data represented by authorities including the International Energy Agency, Department of Energy, Carbon Capture and Storage Association, Intergovernmental Panel on Climate Change, government regulatory bodies, and company press releases. 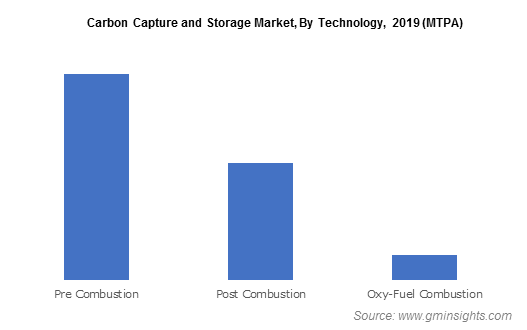 Pre combustion carbon capture technology installation is anticipated to exceed 64 MTPA by 2026. It involves the conversion of solid, liquid and gaseous fuel into a mixture of carbon dioxide and hydrogen by deploying the gasification and reforming processes. Pre combustion capture is appropriate for the gasification including IGCC power plants where coal is transformed into the gaseous fuel or “syngas” by applying heat under pressure. The demand for this technology across the industrial establishments including food processing and chemical will witness substantial growth owing to its high capture rate along with minimal waste streams.

Rising industrial sector investments coupled with the increasing demand for integrated gasification combined cycle power plant will have a significant impact on the pre combustion carbon capture and storage industry. Lower capital costs and smaller equipment size makes it suitable for industrial and utility applications. Sorbents, solvents, and membranes are some the hybrid techniques used for the process of carbon separation which in turn is further enhancing their market statistics. In the forthcoming years, constant efforts to curb the carbon footprint driven by stringent regulatory norms will positively influence the market outlook. 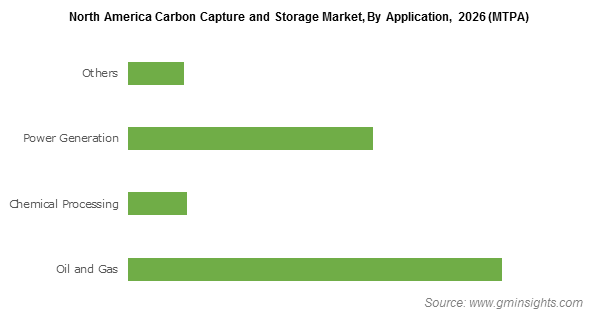 Oil and gas segment accounts for a significant market share due to the continuous demand for crude oil and natural gas required across various industries. Ongoing investment toward upstream oil industry to cater the growing energy demands will stimulate the application of CCS projects substantially. For instance, the International Energy Agency stated that the global upstream investment in 2019 was USD 505 billion, which was 6% higher when compared to 2018. The enactment of stringent emission norms to diminish emissions from the O&G sector has further led to the deployment of carbon capture and storage projects.

Rising investments by the policy makers to deploy innovative & sustainable systems for minimizing the industrial emissions will drive the carbon capture and storage market demand significantly. These government measures help industry players to de-risk, develop, and accelerate the innovations under accurate operating conditions. For instance, the government of UK in 2019 funded more than USD 14 million in HyNet CCS project, which is an integrated CCUS project designed to capture CO2 emissions from the industry. The continuous deployment of government funded CO2 EOR projects will impart a significant surge to the global CCS industry statistics.

North America, Europe, and Asia Pacific accounted for over 90% of the global carbon capture and storage market share in 2019. Presence of robust manufacturing sector and significant investments toward the economic development has made North America one of the major stakeholders across the globe. Positive outlook toward the oil and gas industry along with the government focus to minimize the emission from industrial facilities including chemical, cement and F&B industries will foster the demand for carbon capture and storage across the region.

The market statistics for carbon capture and storage projects across North America will witness substantial growth on account of the increasing energy demands. For instance, as per the EIA, in 2018, the primary energy consumption in the U.S. from the petroleum sources has reached to 36.95 quadrillion BTU in 2018 when compared to 33.94 quadrillion BTU in 2012. Furthermore, the developed economies involve in the upgradation of their conventional systems with the effective emission control technologies including CCS to achieve the minimum emission rate will flourish the regional market growth.

Stringent regulatory norms to decrease the CHGs will further boost the demand for carbon capture and storage technology in the region. For instance, in 2016, the Government of Canada introduced the Pan-Canadian Framework that provides initiatives to obtain emission reductions across all sectors of the economy. The action for minimizing carbon dioxide emissions from the electricity sector includes an obligation from territorial, provincial, and federal governments to accelerate the phase-out of the existing coal units across the nation by 2030. Such regulatory standards by the corresponding governments will create various market opportunities for the carbon capture and storage projects.

Carbon capture and storage market research report includes in-depth coverage of the industry with estimates & forecast in terms of “MTPA’ and ‘USD” from 2015 to 2026, for the following segments: