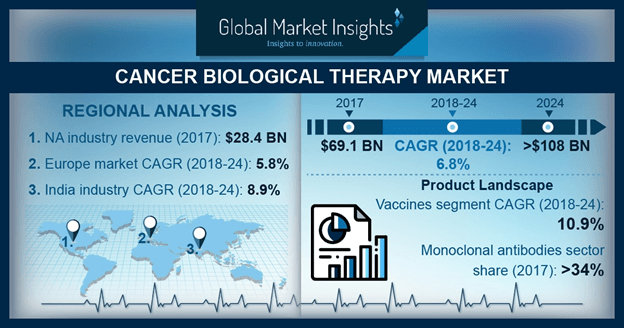 Rising prevalence of cancer worldwide is the key factor that will drive cancer biological therapy business growth during the forecast period. According to WHO cancer is the second leading cause of death worldwide, accounting for more than 9.5 million deaths in 2018. Additionally, prevalence of cancer is estimated to increase by 50% in 2020. Increasing consumption of alcohol and tobacco have led to rise in global cancer burden thereby surging cancer biological therapy industry growth.

Vaccines segment is estimated to witness lucrative CAGR of 10.9% during the forecast timeframe owing to worldwide increasing prevalence of cancer coupled with rising awareness regarding preventive measures for cancer. Growing demand for preventive vaccines such as human papilloma vaccines (HPV) and hepatitis B vaccines (HBV) will drive the segmental growth. Moreover, utilization of therapeutic cancer vaccines to inhibit growth of relapsed tumors that are refractory to surgery, radiation therapy and chemotherapy will further foster segmental growth during the forecast timeline.

Monoclonal antibodies segment accounted over 34% revenue share in 2017 and is projected to show significant growth during the forecast period. Ability of monoclonal antibodies for targeting specific proteins on the cell surface will increase its adoption in cancer treatment. Furthermore, increasing patient preference towards advanced cancer biological therapy to avoid risks associated with anti-cancer drug therapy will further augment segmental growth over the coming years. 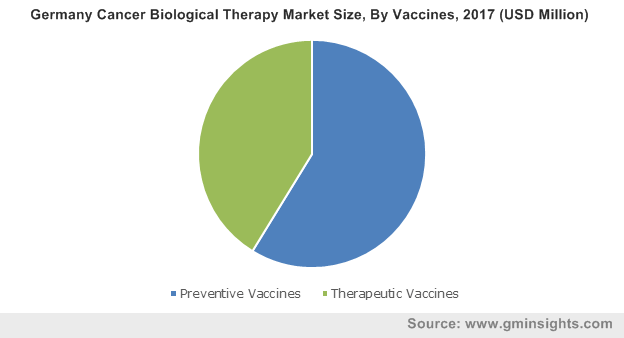 Europe cancer biological therapy market held significant revenue share in 2017 and is anticipated to show 5.8% CAGR over the analysis timeframe. Increasing burden of cancer in the region, presence of huge elderly patient pool and developments in cancer therapies will foster business growth. Rapidly evolving techniques in molecular biology, sophistication in health care as well as improvements and innovative approaches in technology will propel the industry growth over the forecast period. Rising number of initiatives to promote the value of effective cancer treatment will further favor Europe cancer biological therapy industry growth. 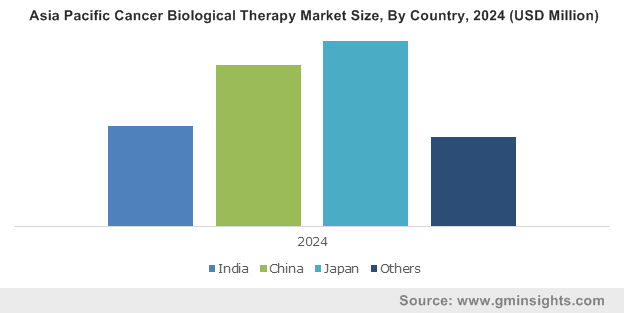 Immunization was discovered more than 200 years ago, that marks the beginning of biological therapy. Centuries ago, a surgeon in New York, William Coley, started using biological therapy to treat cancer patients. However, some people appeared to enter remission after developing certain bacterial infections. He then injected cancer patients with live bacteria, and later with filtered toxins. This method of treatment known as Coley's toxins was used for decades. Further, Paul Ehrlich, won Nobel Prize in 1908, for postulating that the surfaces of cells carried, side chains or receptor molecules. According to him, antibodies attached to the side chains caused the release of antitoxins. He further worked on developing antibodies that could target invaders. Later, the 1980s witnessed encouraging results of interferon usage to treat hairy-cell leukemia, a rare blood disorder. The FDA approved interferon used in this disease and was further used in the treatment of AIDS-related Kaposi's sarcoma, chronic myelogenous leukemia as well as genital warts.

Recently, Steven Rosenberg a researcher at the U.S. National Cancer Institute, discovered the ability of directing human body to discriminate between cancerous cells and healthy ones. In 1992, FDA approved genetically engineered IL-2 for use in advanced kidney cancer treatment. Further, clinical trials to determine the use of interleukin (IL-12) against AIDS and metastatic cancer were started in 1994. With the advent of technological advancement and better understanding of the biology of cancer cells, focus on development of biologic agents to control cell growth has increased in the recent years. Growing R&D investment and favorable government policies to support cancer treatment will drive cancer biological therapy industry growth in foreseeable future.