Growing concerns associated with climate change and pollution have encouraged decarbonization efforts across various industries. A dramatic shift from conventional fuels to carbon-neutral alternatives has influenced the use of blue hydrogen in chemical manufacturing activities, refining, and other heavy industrial operations. Government authorities are focusing on the introduction of new policies and plans to support the deployment of carbon capture and storage (CCS) technologies for hydrogen production. 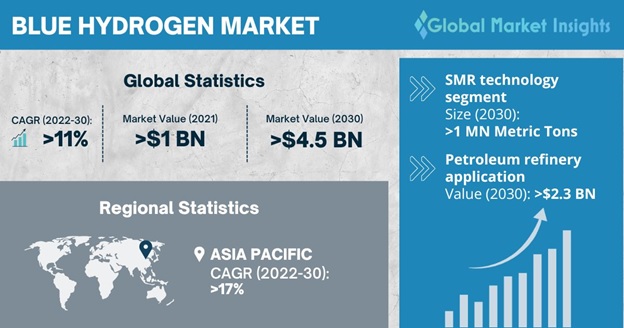 Concerns associated with the effective utilization of carbon capture technology may impede the blue hydrogen market growth. Lack of efficiency of capture & storage systems and challenges such as carbon leakage could negatively affect the production of blue hydrogen. The process of manufacturing blue hydrogen is extremely energy-intensive and relies on massive amounts of energy, unlike grey hydrogen. Volatile natural gas prices across different regions may hinder the fuel demand. 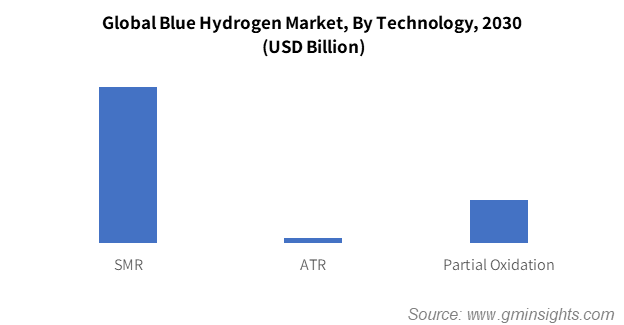 In terms of volume, the steam methane reforming (SMR) technology segment is estimated to surpass 1 million metric tons by 2030. SMR technology can ensure enhanced energy efficiency, greater hydrogen output, and low-cost operation. It also allows large as well as small-scale projects to operate more sustainably. New initiatives are implemented to develop CCS fields and accelerate hydrogen production and capture capabilities. The adoption of green hydrogen systems across a broad spectrum of industry verticals will drive the use of SMR technology.

The petroleum refinery application segment in the blue hydrogen market is anticipated to reach USD 2.3 billion revenue by the end of 2030. Refinery operations heavily depend on hydrogen for the manufacturing of valuable products. However, these activities are under strict government compliance which compels companies to reduce their carbon footprint. Many petroleum firms are replacing conventional fuel technologies with low carbon and economical solutions for sustainable operations across plants. New petroleum refinery plants are also aiming to produce green fuels that emit reduced emissions.

Asia Pacific blue hydrogen market size is poised to register around 17% growth rate during the forecast period. The presence of favorable government measures to reduce carbon emissions is encouraging the use of green fuel alternatives and related systems across the region. Rapid urbanization and industrialization across countries like India and China have resulted in the large-scale integration of affordable and clean energy solutions. Implementation of new projects and robust investments by major manufacturers will impel the production of blue hydrogen across APAC.

Strategic alliances to outline the competitive dynamics across the industry

These companies are focusing on securing licensing agreements and collaboration with other industry participants and technology firms to boost business reach. For instance, in August 2022, Technip Energies N.V. announced the selection by LG Chem as the supplier of its proprietary blue hydrogen technology for the Daesan Complex in South Korea. As a part of the agreement, the company will license the first Blue H2 by T.E.N. hydrogen plant with the aim of producing a hydrogen capacity of 56,000 Nm3/h by using the company’s steam methane reforming technology which will help reduce carbon emissions.

The blue hydrogen market research report includes in-depth coverage of the industry with estimates & forecast in terms of “MT” & “USD Billion” from 2018 to 2030 for the following segments:

The global market value for blue hydrogen was more than USD 1 billion in 2021 and is anticipated to witness over 11% CAGR between 2022-2030.
Asia Pacific market size is projected to expand at over 17% CAGR between 2022-2030, on account of favorable government measures and rising investments in hydrogen production.
The SMR technology segment is projected to reach over 1mn metric tons by 2030 in terms of volume, as the process offers greater hydrogen yield.
Eni, Air Products, Exxon Mobil Corporation, Shell plc, Air Liquide, Equinor ASA, Woodside, Maire Tecnimont Spa, and Topsoe are some of the major companies in the market.
Customize this Report
Inquiry Before Buying