Biopsy Needle Market size was worth more than USD 1.1 billion in 2022 and is projected to witness a 6.6% CAGR from 2023-2032. The rising incidence of cancer and new technological advancements in biopsy needles will facilitate market growth. Changes in lifestyle habits and environmental factors are some of the key contributors to at least 50% of cancer cases. Other risk factors for cancer include exposure to toxic or polluted environments and harmful chemicals such as plastics, polychlorinated biphenyls among others. 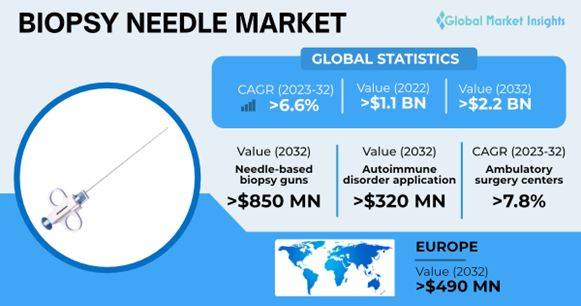 Technological advancements have enabled the availability of advanced technologies for tissue scanning as well as the detection of small cancerous tumors. Companies specializing in biopsy needles are offering innovative technologies as there is minimum to no demand for traditional technologies. For instance, in June 2021, Saga Surgical, a Sweden company, launched its new needle for biopsy called the Forsvall Needle which can minimize the chance of contracting sepsis or infection following a biopsy. According to estimates, the utilization of this needle could save over USD 230 million annually, in case of detection of prostate cancer alone in emergency cases.

A lack of skilled healthcare professionals may impact the deployment and use of biopsy needles. Strong technical proficiency is necessary for a biopsy process in terms of using the equipment and interpreting the data. Due to under-trained health workers, the majority of customers are concerned about proper diagnosis, which may be an obstacle to the growth of the biopsy needle market. For instance, as per estimates, in EU28, the lack of skilled healthcare workforce is projected to reach around 4.1 million in 2030. 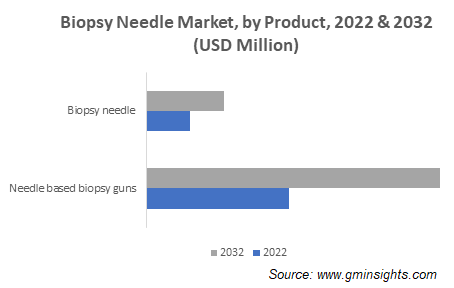 Biopsy needle market share from needle-based biopsy guns was over USD 850 million in 2022 and is expected to witness substantial growth through 2023-2032. Technological advancements in biopsy equipment have supported the introduction of products such as needle-based biopsy guns. In comparison to surgical biopsy, needle biopsy has numerous benefits such as rapid operational speed, less expensive, and less intrusive, as well as the ability to save patients with benign lesions from surgery. These benefits are anticipated to drive segmental growth over the forecast period. 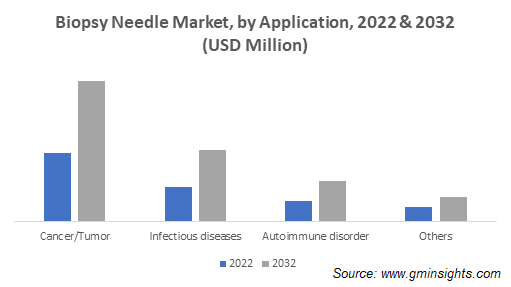 The biopsy needle market share from autoimmune disorder application is anticipated to exceed over USD 320 million by 2032. Some common autoimmune disorders include type 1 diabetes, rheumatoid arthritis (RA), psoriatic arthritis, multiple sclerosis, celiac disease, and others. Around 4% of the world's population is believed to be affected by more than 90 autoimmune diseases, according to estimates from the American National Institutes for Health (NIH). While the American Autoimmune Related Illnesses Association (AARDA) states that more than 50 million Americans have one or more autoimmune diseases. The prevalence of these diseases is increasing, with associated costs to the U.S. economy of about USD 86 billion yearly. As a result, the demand for biopsy procedures and related equipment should increase over the forecast period. 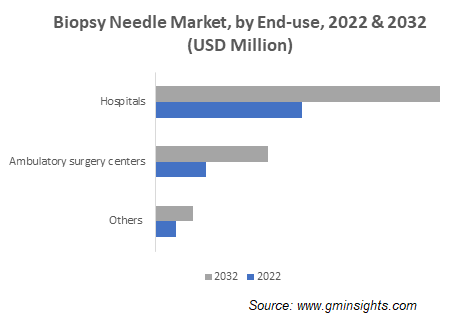 Based on end-use, biopsy needle market share from ambulatory surgery centers is estimated to witness over 7.8% CAGR during the forecast years 2023 to 2032. Ambulatory Surgery Centers (ASCs) are becoming well-liked among doctors and patients because they are affordable and provide a wide range of medical treatments. According to the Centers for Medicare & Medicaid Services, the number of ASCs increases by 1.7% annually on average. Furthermore, the number of procedures/ services has increased by an average rate of 2.7% annually in recent years. 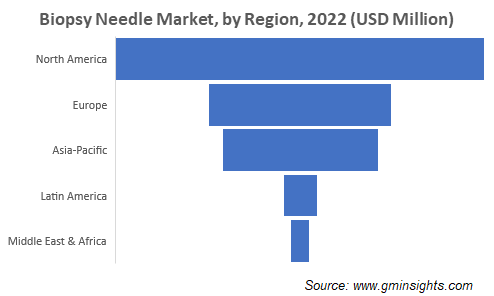 Europe biopsy needle market is anticipated to reach over USD 490 million by 2032. In 2020, there were more than 2.7 million new cancer diagnoses and over 1.3 million cancer-related deaths in the region. Ireland, the Netherlands, Belgium, Denmark, and other European nations have the highest incidence of cancer. Germany dominates the market for biopsy devices in Europe. This is due to the abundance of highly trained medical professionals, the high level of development in healthcare infrastructure, and the presence of key market players. Europe is also home to a vast number of older people, which will increase the demand for biopsy needles in the coming years.

These companies are focusing on the expansion of production and distribution across international borders. For instance, in January 2021, Hologic announced the acquisition of SOMATEX Medical Technologies GmbH, a leading company dedicated to developing markings for biopsy sites and localization technologies. In addition to enhancing the company's product portfolio, the acquisition provided the company with a stronger market position, helping the company grow.

Impact of the COVID-19 pandemic on biopsy needle market trends

Many industries and organizations, regardless of size, were negatively impacted by the COVID-19 pandemic, which had a substantial unfavorable influence on the global economy. Due to the start of the lockdown and the limitations enforced by authorities during the pandemic, the biopsy needle industry initially experienced a setback. The COVID-19 pandemic had a large financial impact on the healthcare sector, academic radiology departments, and radiology practices in April 2020. For instance, population breast screening programs in England ended in March 2020 as a result of the COVID-19 pandemic.

The biopsy needle market research report includes in-depth coverage of the industry with estimates & forecast in terms of revenue in USD Million from 2018 to 2032 for the following segments:

Global market for biopsy needle was worth more than USD 1.1 billion in 2022 and is projected to witness over 6.6% CAGR from 2023-2032.
Biopsy needle industry share from autoimmune disorder applications is anticipated to exceed over USD 320 million by end of 2032 due to the growing prevalence of autoimmune diseases.
European market for biopsy needle is anticipated to reach over USD 490 million by the end of 2032 driven by the availability of highly trained medical professionals and new developments in healthcare infrastructure.
Some of the leading companies in the global biopsy needle industry include Becton, Medtronic plc, Boston Scientific Corporation, FUJIFILM Holdings Corporation, and Dickinson & Company.
Customize this Report
Inquiry Before Buying