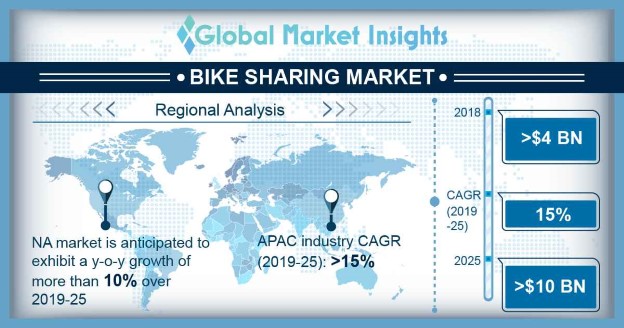 Increasing government initiatives for the development of reliable bike-sharing infrastructure coupled with the proliferation of smart cities across the globe are driving the bike sharing market growth. Various governments are offering subsidies to service providers for developing stations and expanding their reach to a large number of commuters. In 2018, Chinese Municipal governments subsidized the Public Bike Sharing Program (PBSP) development to encourage non-motorized transport and offer convenient, flexible, and low-cost mobility options. These services are majorly used in urban areas due to the rise in traffic congestion and increased fuel prices. Growing concerns related to the rise in environmental pollution are leading toward the adoption of environment-friendly transport solutions including bicycles and electric bikes, supporting industry growth.

A major factor hampering industry growth is the increase in bike vandalism & theft. Several such incidents have been reported globally by the dock less bike-sharing service providers in recent years. For instance, in September 2018, Mobike abandoned its services in Manchester due to theft & vandalism in the city, resulting in huge bike losses. However, companies are making large investments to enhance the security of free-floating bikes, which will reduce the impacts of such incidents and will ensure bike safety. 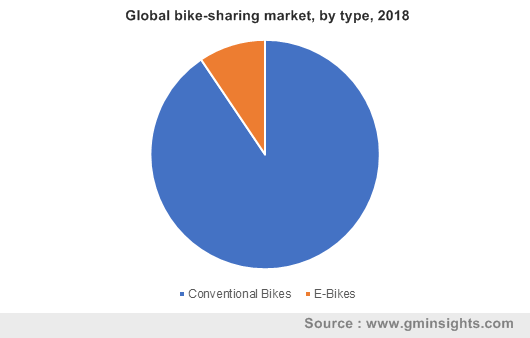 The demand for e-bikes is increasing across the globe owing to their fast & flexible operations and zero carbon emissions. The growing consumer inclination toward the usage of e-bikes as cost-effective & eco-friendly transport solution is adding up to bike sharing market expansion. The increasing investments in R&D activities to enhance battery performance and improve bicycling infrastructure are expected to provide lucrative opportunities for the company’s expansion. These cycles are majorly used by commuters for hill climbing and carrying heavy loads, where pedaling manually is a critical task. Bike-sharing service providers in North America and Europe are replacing conventional bikes with e-bikes to offer reliable and efficient performance to their users. For instance, in March 2019, Uber announced the launch of Jump, its e-bike sharing service in London. The company delivered over 350 bikes across the city, which can be located through smartphone applications.

The free-floating model is expected to witness high growth due to its enhanced flexibility, accessibility, and affordability. Service providers are increasingly deploying dock less cycles on the roads to reduce the cost of building large docking stations. The integration of advanced GPS solutions into bikes aid service providers to locate them in any region, eliminating the chances of theft incidents. These cycles are majorly used by commuters to cover large distances, without any parking concerns. Several service providers such as LimeBike and oBike provide credit points to users for returning the bike to a designated parking location. The increasing traffic concerns in urban areas are encouraging commuters to use free-floating options over station based. 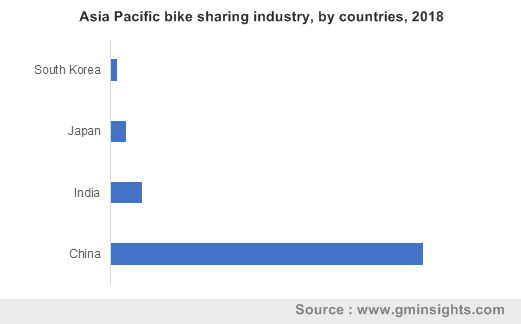 Asia Pacific bike sharing market is expected to grow at over 15% CAGR from 2019 to 2025. The industry is witnessing a rapid growth in the region owing to the changing consumer preference toward energy-efficient transport solutions. According to the Ministry of Transport (MoT), China has over 70 bike-sharing companies, with 23 million bicycles & over 400 million users across the region. The increasing urbanization and rapidly growing population in India and China are contributing to industry expansion. Several start-ups are investing in the Chinese market due to the availability of a large number of potential customers in the region. Additionally, around 30 Chinese cities including Shanghai and Beijing have implemented several regulations to guide bike-sharing maintenance, operation & production, enabling service providers to remove damaged bikes from the existing fleet. For instance, in August 2017, China issued a country-wide framework for regulating dock less bike-sharing to ensure even distribution of bikes & designated parking space set-up.

The demand for bike-sharing services is increasing in India due to the rising pollution & noise emission in several cities including Delhi, Mumbai, and Bangalore. The Indian government is developing dedicated bicycle routes to ensure maximum pedestrian and cyclist safety, contributing to industry expansion. The young & geriatric population in the region is increasingly utilizing these services due to their low-cost and easy availability.

The increasing demand for low-cost transportation alternatives in Latin American countries including Brazil and Mexico is expected to provide lucrative opportunities to industry expansion. Companies operating in the region are integrating several advanced technologies into bicycles to deliver efficient user performance. For instance, in February 2018, BKT bicipública (BKT) announced the partnership with Stage Intelligence, a London-based Artificial Intelligence (AI) solution provider. This aided BKT to incorporate AI technologies into its bike-sharing platform to optimize the rider experience.

Prominent players operating in the bike sharing market are JUMP, Mobike, Ofo Inc., Lime, Lyft, SG Bikes, and Tembici. Companies are adopting several strategies such as collaborations & partnerships and mergers & acquisitions to expand their business operations. For instance, in July 2018, Lyft announced the acquisition of Motivate, a San Francisco-based company. This helped Lyft to enhance its business operations in the U.S. Players are making large investments for the development of new bike stations and adding new bikes to the fleet to expand their geographical reach. For instance, in December 2018, Ford GoBike announced the addition of approximately 600 e-bikes to the U.S. market. Several leading enterprises are making large investments in start-up companies to enhance their business operations. For instance, in March 2018, Alibaba Group announced an investment of around USD 866 million in Ofo Inc. Players are also partnering with other shared mobility companies & public transport companies to expand their performance.

The industry is moderately fragmented owing to the presence of various local as well as global service providers across the globe. Companies are making large investments in technological innovations such as AI and IoT to offer reliable performance to commuters. The industry is witnessing a huge demand for dock less bike solutions due to enhanced flexibility. The operators are focusing on expanding their fleet to sustain the increasing competition. Players are developing user-friendly smartphone applications to offer increased usability to the operator. The leading companies are making large investments to enter emerging markets such as Brazil, India, and Saudi Arabia.

The market size of bike sharing valued at over USD 4 billion in 2018.
The industry share of bike sharing will grow at a CAGR of 15% from 2019 to 2025.
Bike sharing is likely to register considerable demand on the back of increasing government initiatives for developing reliable bike-sharing infrastructure as well as proliferation of smart city projects.
The demand for e-bikes has grown exponentially over the years owing to their ease of operations and eco-friendly nature, which may further promote the requirement of bike sharing services in future.
Bike sharing services in the APAC region are witnessing increasing demand owing to changing consumer preference toward eco-friendly transportation and investments by numerous bike sharing start-ups across China.
Customize this Report
Inquiry Before Buying