Automation Testing Market size exceeded USD 14 billion in 2019 and is expected to grow at a CAGR of above 15% from 2020 to 2026.  The popularity of automation testing services is growing among enterprises due to less turnaround time and enhanced efficiency of testing services in the software. 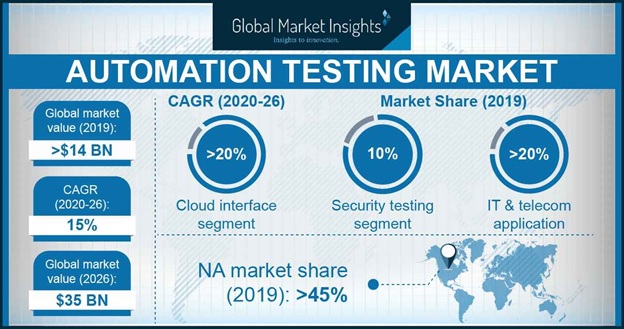 The testing tools and platforms automates GUI connection, registration forms, login forms, and database corrections to save costs, which will increase their market opportunities. Adding to this, the market players are more inclined toward the integration of advanced testing methods, such as Agile and DevOps.

The adoption of DevOps in software development is also projected to drive the automation testing demand in the coming years from the increasing penetration of cloud technologies such as containerization and micro services. The centralized nature of cloud computing provides a standard and unified platform for development, planning, deployment, and testing of applications, making cloud platform a viable solution for integrating development and operation tools.

The COVID-19 pandemic has accelerated the automation testing market trends toward e-retail, online banking, and various mobile applications for entertainment, healthcare, among others to achieve faster delivery time and improved customer experience. Also, the lockdown scenario imposed by the government across the globe has influenced several enterprises to adopt online and digital platforms in their business models to maintain the continuity in services. The COVID-19 pandemic has accelerated the trend toward work from home scenario, creating high growth opportunity for automation testing for various remote software applications and maintaining the IT infrastructure.

Regression testing from functional testing type segment held over 15% of the automation testing market share in 2019. The regression testing verifies the performance of existing software and check the functionality even after the interface and updation with other software products. It reintroduces previously resolved bugs and helps to find out new bugs in updating applications, which will increase its demand in mobile applications. The mobile applications for online shopping, entertainment, money transaction, etc., require continuous upgrades to enhance the user experience.

The regression testing type helps to ensure that the new changes do not affect the existing functionality of the application. This has led several companies to adopt regression testing in their testing services and platforms for better performance of their offerings. In October 2020, Applications Software Technology (AST) LLC engaged in IT consulting and managed services announced the release of its new automated testing-as-a service (TaaS) to accelerate test cycle for Oracle Cloud application. It offers cross browser platform compatibility, which will enable automated regression testing for browser configuration. 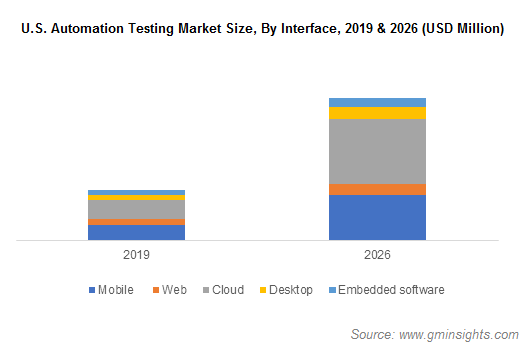 The mobile end point interface segment captured around 25% of the automation testing market share in 2019 and is set to achieve more than 15% CACR through 2026. The rising customer interest toward digitalization such as online banking, online education, telemedicine, and online shopping will fuel the industry demand. The mobile applications for these digital services are highly dynamic as they continuously upgrade their products and services, which requires continuous testing and development of the application.

The rising e-commerce sector will create market opportunity for companies offering automation testing to deliver high integrity and functionality in the application. According to the press release of United Nations Conference on Trade and Development in April 2020, the e-commerce sales reached USD 25.6 trillion in 2018 with an increase of 8% from the previous year. This has led several market players to expand their footprint in the mobile-based testing, gaining high competitiveness in the industry.

The BFSI application crossed a market share of above 25% in 2019 propelled by the rising adoption of digital services, such as withdrawal, balance inquiry, money deposit, and transfer of funds in the banking sector.

According to Capgemini’s world payment report, the number of mobile wallets is expected to experience an annual growth rate of about 148% in the coming five years and will reach to approximately USD 4.4 billion by 2022. 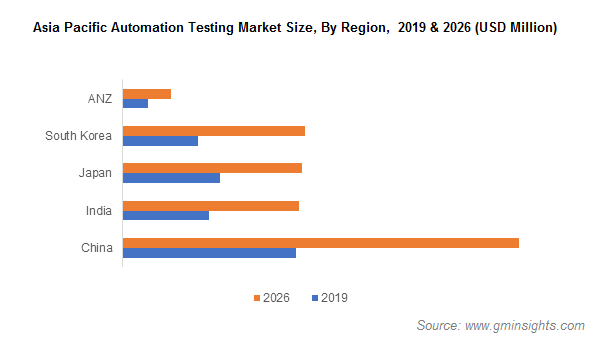 Asia Pacific accounts for the fastest-growing region in the automation testing market owing to the proliferation of digitalization in countries such as China, Japan, and India. Rising initiatives by the government in India has enrolled several investments and schemes to accelerate digitalization in the country. Also, the presence of skilled IT professionals in the country at lower salary makes India one of the largest regions for outsourcing IT software and services.

The rising adoption of online retail in Malaysia, China, and India due to rise in consumer spending and lifestyle will accelerate the market growth opportunities. The presence of several e-retail companies in the region, such as Amazon, Alibaba, etc., will boost the demand for application and web testing services. Alibaba generated an annual revenue nearly USD 768 billion in China for the retail sector, with an increase of 28% in 2018.

Focus on business acquisition strategies to stay competitive in the industry

In April 2018, Eurofins Digital Testing, engaged in QA & testing services, announced the acquisition of Edge Testing Solution, an automation testing provider based in the UK. This strategic acquisition will add an opportunity to the company to elaborate its automation testing services, such as managed, functional, automated, and performance testing, in various sectors.

This market research report on automation testing includes in-depth coverage of the industry with estimates & forecast in terms of revenue in USD from 2015 to 2026 for the following segments:

The global automation testing market size valued at more than $14 billion in 2019.
The automation testing industry is projected to expand at more than 15% CAGR over the projected time period owing growing popularity of automation testing services among enterprises.
The COVID-19 outbreak has fast-tracked the trend towards work from home, further creating new growth opportunities for automation testing for numerous remote software applications as well as maintaining the IT infrastructure.
In 2019, the mobile end point interface segment accounted for over 25% of the global market share and is likely to witness above 15% CAGR over the forecast time period owing to growing customer inclination towards digitalization.
In 2019, the BFSI application segment accounted for more than 25% of the global market share and will depict considerable growth powered by the increasing adoption of digital banking services.
Asia Pacific is considered as one of the fastest-growing regional markets across the global market landscape due to the proliferation of digitalization in countries like India, Japan, and China.