Automated Fare Collection (AFC) System Market size estimated at USD 4 billion in 2015 and is predicted to register over 10% gains from 2016 to 2023. 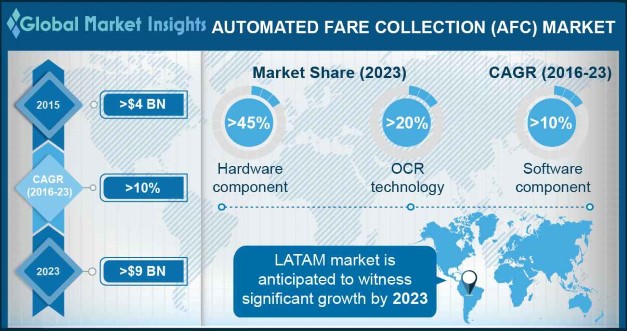 The automated fare collection system market growth is attributed to favorable government initiatives worldwide for the development of sustainable & smart transport infrastructure coupled with rapid usage of advanced fare collection technologies including electronic payment systems and smartcards. Governments in the UK and the Netherlands have been introducing AFC systems to provide smart card technology to regional authorities. In December 2015, the UAE administration and Xerox transportation solutions introduced a smart fare collection system for buses by offering a single card for the usage on transit modes in Abu Dhabi, reducing passenger waiting time in queues and traffic congestion times. The growing usage of smartphones for accessing travel information applications will also support market growth. The major m-payment companies including Apple, Google, and Samsung are also playing an important role in the payment of transportation fees using AFC systems. Smartphones help to integrate mobile application ticketing, on-board ticketing, and online ticketing into smart ticketing solutions, which allow transport authorities and operators to deliver better services to their clients and reduce fare evasion situations & fund leakage. 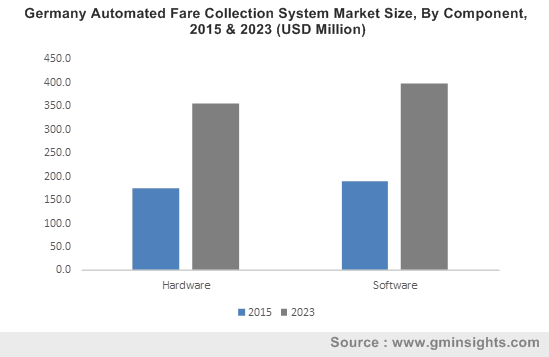 The hardware market is expected to hold a market share of above 45% by 2023 due to the rising implementation of automatic fare collectors in public transit networks. The transport sector is witnessing a rise in the usage of hardware electronics, such as bus card processors, bus controller units, and portable ticketing devices, which are required for effective implementation of AFC systems. The massive proliferation of metro rails and bus rapid transit systems has resulted in passenger volumes, generating the need for smart fare collection systems.

The Optical Character Recognition (OCR) segment is estimated to hold an automated fare collection system market share of above 20% by 2023 due to the growing usage of the OCR technique for automatic ticket collection. The OCR software is widely used in various forms such as personal smartphone scanning devices, desktop applications, and server-based solutions that are capable of handling workflow without human interaction. By using OCR technique for automated data processing, the transport companies can minimize their dependency on traditional methods of data entry. 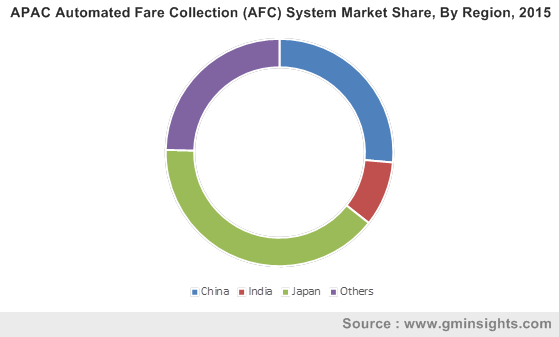 Asia Pacific AFC system market growth is attributed to the rising government support for the development of transit systems to improve public transportation in the region. For instance, in June 2015, the Kuala Lumpur government introduced Bus Rapid Transit (BRT) service in Sunway to minimize traffic congestion in the area. The market is gaining momentum due to the increasing adoption of these systems in public transportations, particularly in the metro. For instance, in June 2015, Delhi (India) metro authorities installed 210 new AFC gates in key stations including Huda City Center Station and Nehru Place stations to ensure the smooth flow of passengers. AFC systems provide an enhanced ticket booking facility to users/commuters and also help operators to resolve the overload booking issue of tickets during peak hours. Rapid digitization, growing infiltration of smartphones, and demand for digital payment method followed by strong administrative visions for intelligent transportation infrastructure are anticipated to drive the market.

The companies present in the automated fare collection (AFC) system market are enhancing their product capabilities through partnerships with technology companies. For example, in October 2015, Transdev enhanced its fare collection system by using Parkeon’s Wayfarer6 driver consoles to operate on certain UK bus routes. In May 2015, QNX Software announced that its QNX Neutrino OS is powering dare collection system, which includes ticketing machines, automatic gates, and onboard bus equipment throughout the countries including the Philippines, Singapore, and Thailand. Companies operating in the market are focusing on product innovations to differentiate their offerings and gain a competitive edge over their competitors.

The rising adoption of advanced fare collection technologies not only to collect payments but also to combine with data collection has become very important for the profitability of the public transit agency. The transportation sector has witnessed a rapid change from purchasing tickets to a wide variety of payment options, which are more secure and efficient. Advancements in technology have led to the expansion of several smart card technologies, providing consistency and nominal errors. Also, the rising need for smart transportation infrastructure has propelled the demand for advanced fare collection systems to drive service improvements and enable operators to ease passenger movement.

The market size of automated fare collection system was valued over USD 4 billion in 2015.
The industry share of automated fare collection system market is projected to witness 10% growth rate during 2016 to 2023.
Dramatic rise in the demand for smartphone and favorable government initiatives are likely to drive the demand for AFC systems.
Prevalent use of OCR technology in personal smartphone scanning devices, server-based solutions and desktop application are likely to boost the demand for optical character recognition technology.
Increase in the use of hardware electronics, including bus controller units, bus card processors and portable ticketing devices is likely to provide substantial gain to manufacturers of automated fare collection (AFC) system.
Favorable government policies for the development of transportation systems will aid stakeholders to invest in the industry.